Bands of brothers and sisters 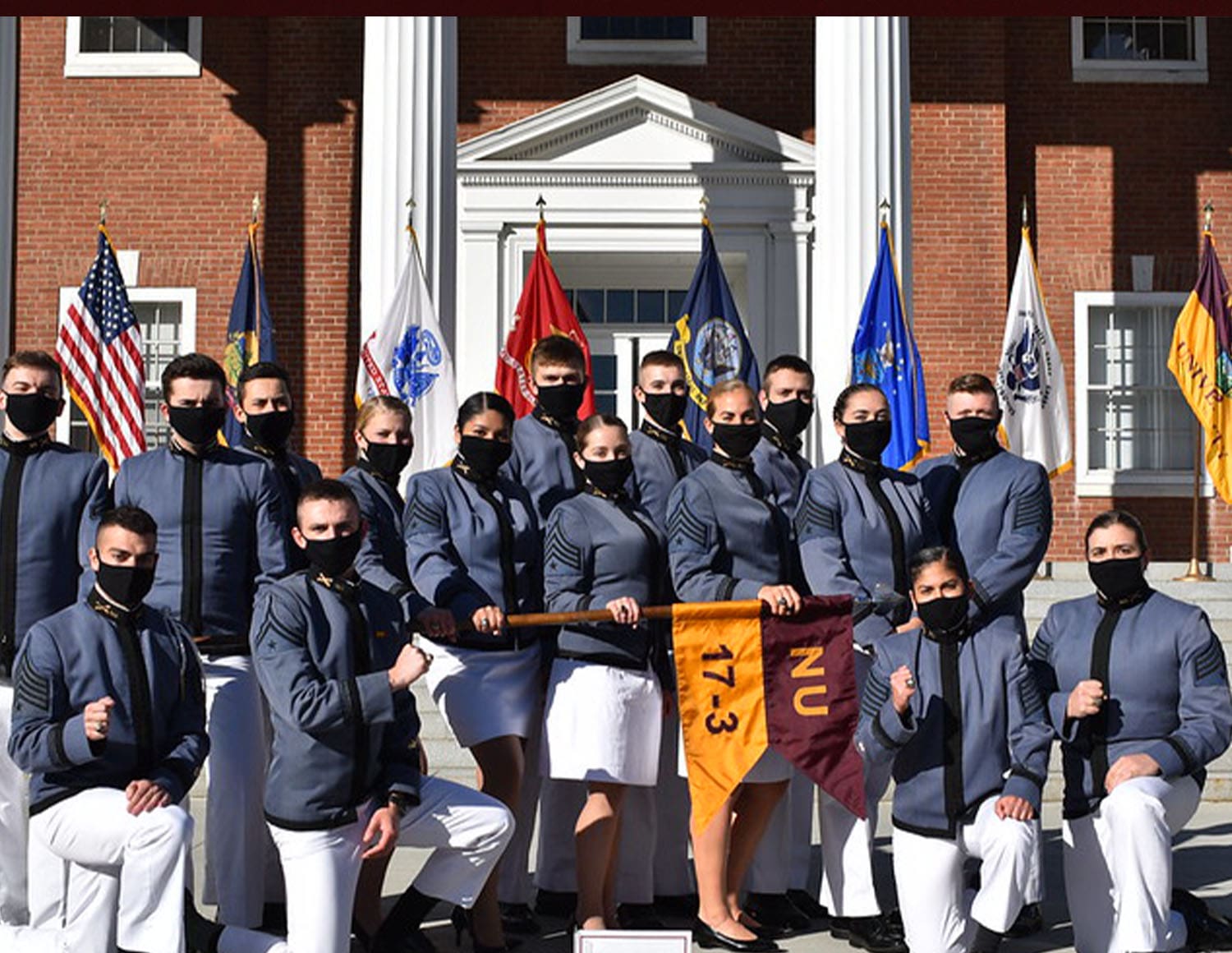 The ring’s the thing, as generations of Norwich University alumni will tell you. The class jewelry, as large as World Series championship rings and traditionally worn loud and proud on right hands, are no mere baubles. They represent triumph, tradition and inclusion.

Ordinarily, the Corps would have held a spring ring ceremony, as it has since the 1980s. Juniors would have marched from the Upper Parade Ground to Plumley Armory in their original freshman year platoons, where their former cadre members, who’d been invited back to campus, would bestow the class rings. Lt. William Passalacqua ’88, the Class of 2021 ring committee’s adviser and an assistant commandant, said a Sept. 18 reception dinner had been planned at Plumley to celebrate.

The coronavirus scrapped all that.

When Saturday arrived, the students had long ago received their rings — they’d been postal mailed after March’s infection curve-flattening closure. One hundred one rings were mailed, Passalacqua said in a March 20 message to university and student leaders that thanked mailroom staff members Kaci Grandin, Mitch Abraham and Herb Carlton for their help.

Aspen Reinauer, a senior who served on the 2021 Ring Committee (and is now the Student Government Association president) prepared and addressed the ring packages. The Ring Committee’s Vice Chairwoman Isabella Leister, also a senior, distributed more than 100 rings for pickup.

“Now that’s having some fun and making the best of a disappointing situation,” he wrote.

Civilian students will have their ring ceremony later.

“This ring will then mean as much to the man wearing it as his diploma, and once the custom is started and lived up to every year, the alumni will appreciate more and more what a ring of this nature stands for,” a quote from a March 8, 1923, article in the Norwich Guidon student newspaper read.

Anarumo, presiding over his first ring ceremony since succeeding Schneider as Norwich president June 1, congratulated the students for their achievement and for weathering the virus’s schedule-disrupting whiplash. He said although he’d hoped for a bigger celebration, Vermont Health Department guidelines wouldn’t allow it.

“I absolutely hate what has happened to your class,” Anarumo said in apology. “Because of this virus, we’ve lost the ceremonies you’ve looked forward to so much. You’ve done enough as a class and as professionals and members of Norwich to deserve better.”

Schneider spoke next, saying that neither he nor Anarumo, creative spirits both, could have concocted a tougher collective leadership challenge than the current one. Campus leaders’ immediate task, Schneider said, will be caring for one another and upholding Norwich’s (and Vermont’s) distinction as a near-coronavirus-free haven for prospective students.

“I’ve lived 74 years, I’ve lost a wife, I’ve been to Vietnam. … I’ve done all the things I was supposed to do,” Schneider said. “And this right here may seem like it’s terrible for you, but let me tell you, it’s not the worst thing you’re going to face.

“And, by the way, it’s getting you ready to be the leaders we need you to be,” he added. “What a great proving ground.”

“The (ring’s) meaning mysteriously, magically and especially changes to say, ‘Now I’m a member of something bigger than myself,’” Schneider said. “And that’s the most important thing you have learned in your four years here.

“All of you, think about this,” Schneider said, his voice rising to a shout. “You will do anything to help a classmate, right? You did it as a rook, you protected them. You helped each other; you’ve done it all along and you’re still doing it today.”

Schneider invited the students to hold their rings to feel their weight — a symbol of the promise to uphold Norwich’s Honor Code.

“Then you know the power of this ring,” Schneider said. “It means you will not let that Honor Code down and you will not let the Norwich values down. They are like Vermont granite. If you honor them, they will never let you down.”

Daniel DeRosa, a senior criminal justice major and Corps of Cadets’ public affairs officer, said although he and his classmates were sorry to miss their ceremonial moment and its campuswide electricity last spring, he was glad to see Schneider and Anarumo onstage and to have his ring.

“This is the milestone for leadership,” DeRosa said, adding that underclassmen sometimes recognize the rings more readily than they recognize upperclassmen’s uniform leadership stripes. “It’s just a good reminder of everything that’s happened at Norwich and all we’ve gone through. I got to be in leadership. I got to earn the ring.”

Nick Kandra, a senior criminal justice major on the Ring Committee, said completing the rings’ design, managing their distribution and devising the scaled-down ceremony felt like triumphs. After Schneider and Anarumo spoke, he said, the feeling of accomplishment grew.

Shawnae Evans, a senior neuroscience major who recently earned the Air Force Scholarship to attend medical school free of charge after commissioning, said she proudly wears her ring and gladly carries its responsibility.

“President Schneider said it best, when you look down at your hand and see the ring, it’s a reminder of the community you stand with,” she said. “You’ve done it; you’ve taken the lead. And everyone who graduates becomes a mentor to the next leaders in the Norwich community. We (as seniors) are embracing that culture.