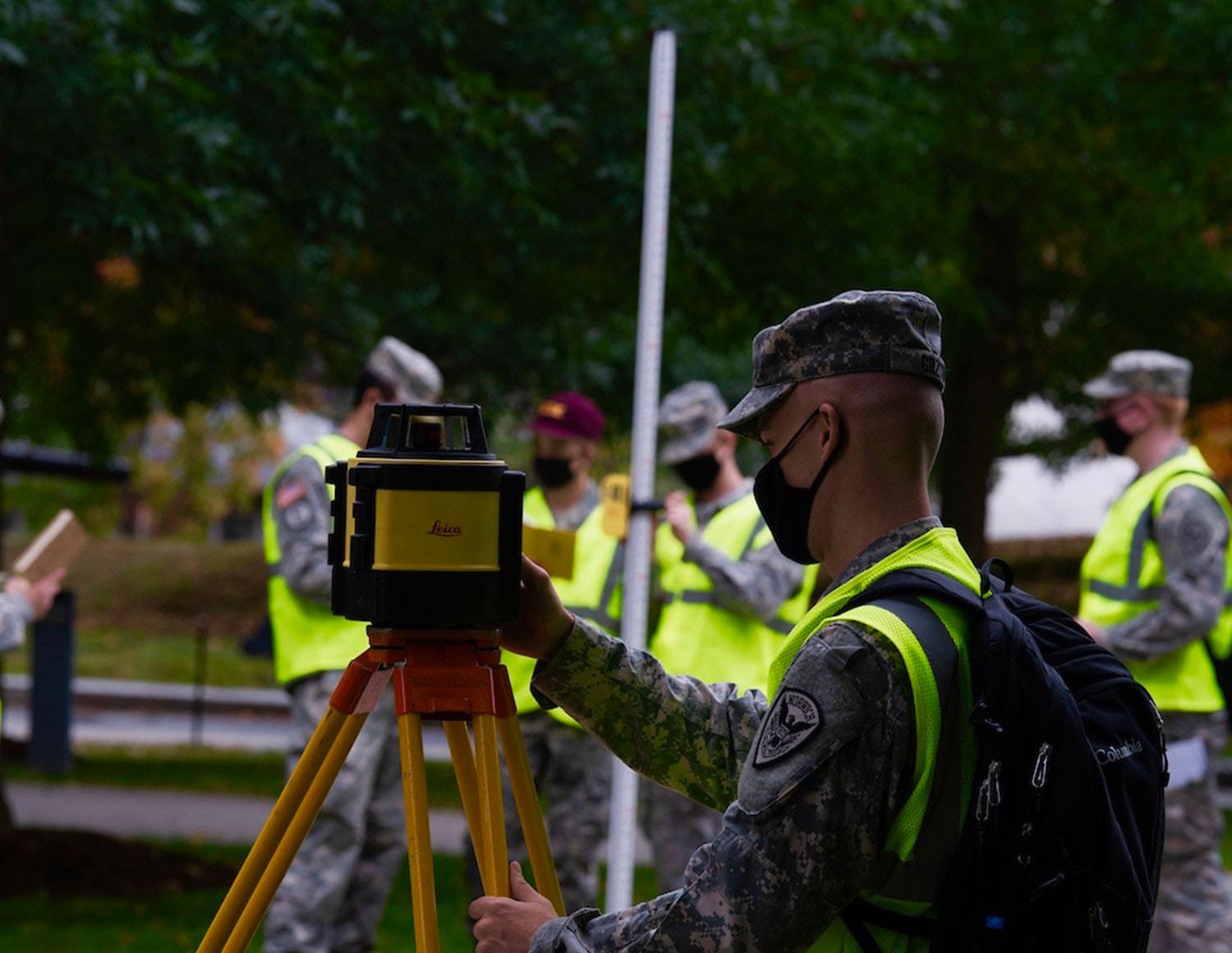 In other words, it was another busy week with campus chugging merrily forward.

On Saturday, Norwich honored President Emeritus Richard W. Schneider, renaming North Hall for him. Schneider, who was on campus to deliver the keynote at the postponed Commencement, saw the new name revealed on the building and a portrait of him that will go inside. In the portrait, he’s wearing the familiar Army green Vermont Militia uniform he’d worn so often during his 28-year presidency.

Schneider, who’d retired to Lake Dunmore in Addison County, stripped off his fittingly Norwich-maroon face mask, and smiled at the gathered, masked and physically distanced onlookers, who included his wife, Jaime and his daughters.

“We have missed you desperately … many of you I’ve grown up with, and what a great honor that is.” Norwich University President Emeritus Richard W. Schneider

“It is so nice to be with people,” said Schneider, who continued the Norwich color scheme with his maroon-and-gold necktie. “We have missed you desperately … many of you I’ve grown up with, and what a great honor that is.”

After thanking the university’s trustees for honoring him, Schneider told the story of how Gordon Sullivan, a 1959 Norwich University graduate and longtime former chairman of the board of trustees, was humbled and awed seeing his name on the Sullivan Museum and History Center.

“The night before the dedication, Gordon and I walked up on the (Upper Parade Ground),” Schneider recalled. “He had not seen his name on the building. And we got to the steps, and it was unbelievably important.”

“Now I know how he felt,” he said. “He stopped breathing. That’s how you feel.”

The past week featured the Admissions Office’s Get to Know Norwich webinar for prospective students. Admissions counselor Sam Mattson, Class of 2018, ran the session, reminding his audience of the university’s long history (the United States had only 22 states when Norwich was founded in 1819; Alabama joined the union that year’s December) and its strong, supportive alumni network.

Mattson’s PowerPoint presentation ticked off plentiful Norwich details — its 30 plus majors, 2,300 students, 80-plus clubs and dual Corps and civilian lifestyles. Mattson said he came in with his major undeclared and tried many introductory courses, including business and psychology before settling into communications, which became his major.

“One of the things you’ll want to do when you’re here at Norwich is create value for yourself; it’ll go a long way, especially when you enter the job field,” he said. “You’ll want to (gather) as many skills sets as you can. When you start applying for jobs, companies will want to see what you bring to them.”

This way to the virtual open house

Admissions will have one of the coming week’s pillar events, the Virtual Fall Open House. The open house would ordinarily be in person; it went virtual because of the coronavirus pandemic as last week’s postponed-from-May Commencement did and October’s Military Writers’ Symposium and Homecoming will.

If campus’s high activity level is leaving you jittery, the Counseling and Wellness Center will present a soothing mindful meditation workshop from 2 to 3 p.m. Monday. Admission is free and preregistration isn’t required. All you need is a Zoom link. Click here to learn more.

Join the résumé session via Instagram Live @norwichcic or by GoToWebinar by registering on Handshake.

President Mark C. Anarumo this week hailed the campus community’s efforts to stay healthy and cope with the coronavirus pandemic. In his Wednesday Update from The Hill message, he announced the loosening of some measured restrictions.

In line with the entering of this new phase for campus protocol, Photo of the Day will transition to a weekly feature. Watch this space Fridays for pictures of the week, recaps of the past week’s activity and a glimpse at activity to come.