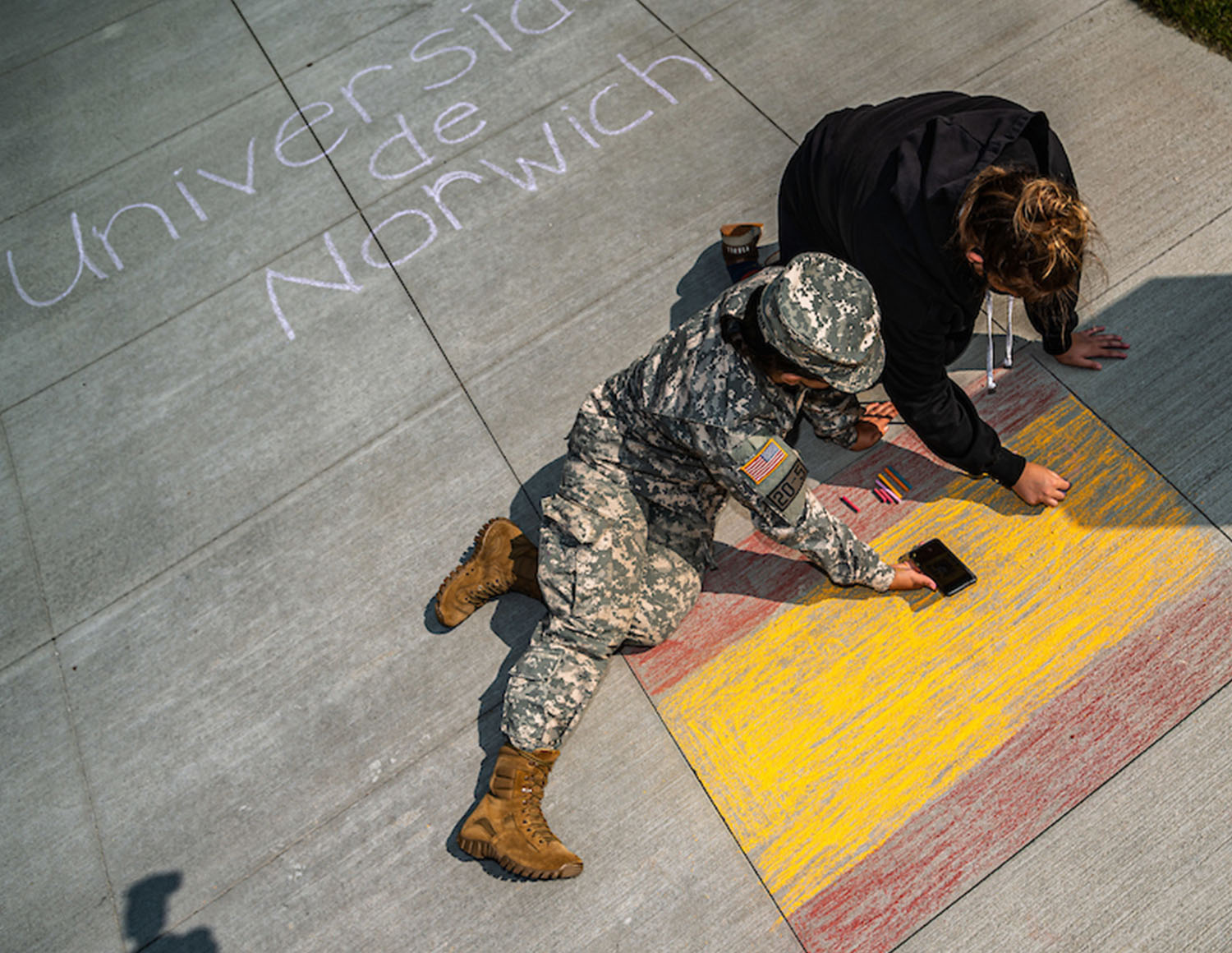 With strokes of chalk, bursts of color and a torrent of creative energy, Norwich University Spanish language students on Wednesday celebrated multicultural richness and the many nations that speak Spanish around the world.

National Hispanic Heritage Month, which honors Hispanic and Latino Americans’ cultures and heritage rooted in all Latin American countries, started Tuesday and continues through Oct. 15. This week, the National Archives and Records Administration (with a virtual presentation of Spanish posters from World War II) and the Smithsonian Folklife Center (with a virtual concert of master percussionists) joined the celebration in the United States.

On campus, Dr. Kaitlin E. Thomas, an assistant professor of Spanish, brought about 30 students outside for a “chalk-in” to celebrate campus’s rich diversity of Spanish-speakers, who hail from many regions foreign and domestic, and the many Spanish-language learners, from beginner to advanced.

“(The students drew) really anything that (they) felt excited about to commemorate Hispanic Heritage Month and to highlight a place that they have a connection with,” Thomas said. “We’re understandably limited in the types of events we can host at the moment, and so being outside, together, but socially distanced to celebrate the Spanish language and culture was a way to create a literal and figurative bright spot on campus.”

Ferraro connected personally with the heritage celebration because she has relatives in Puerto Rico, her mother’s native country. She said she was glad to help her fellow students discover language and connect with international classmates, as she once had.

“Before I came to this school, I didn’t know these opportunities existed,” said Ferraro, who joined two other students in depicting Costa Rica’s flag, with its bands of red, white and blue. “It’s really cool that the Spanish Department is making (these studies) visible.”

Ferraro said the free expression helped fellow students consider the wider world and think about how people with a common language can experience culture differently. She said the drawings may spark reflection on cultural identity. Growing up, as she interacted with her Puerto Rican kin and people who shared her blended Hispanic heritage, she sometimes considered what it meant to be Hispanic or Latino.

“You realize there’s a bigger picture,” she said. “There is so much outside of the U.S., and all countries have their own different cultures and politics.”

Anthony Romano, a senior in the Corps of Cadets with a dual international studies-Spanish major, drew a pudgy llama with the word “Peru” inside it, and a Cuban flag — representing two nations he’s visited.

Romano said the chalk-in highlighted both language and geopolitics, drawing attention to relationships among nations. Like Ferraro, he said the activity amplified a perhaps less noticed aspect of campus life.

“You see a large group of people with personal connections,” he said, “coming out to appreciate a variety of cultures you otherwise might not have guessed were so celebrated on campus.”

Click here to see the full photo gallery from Wednesday.