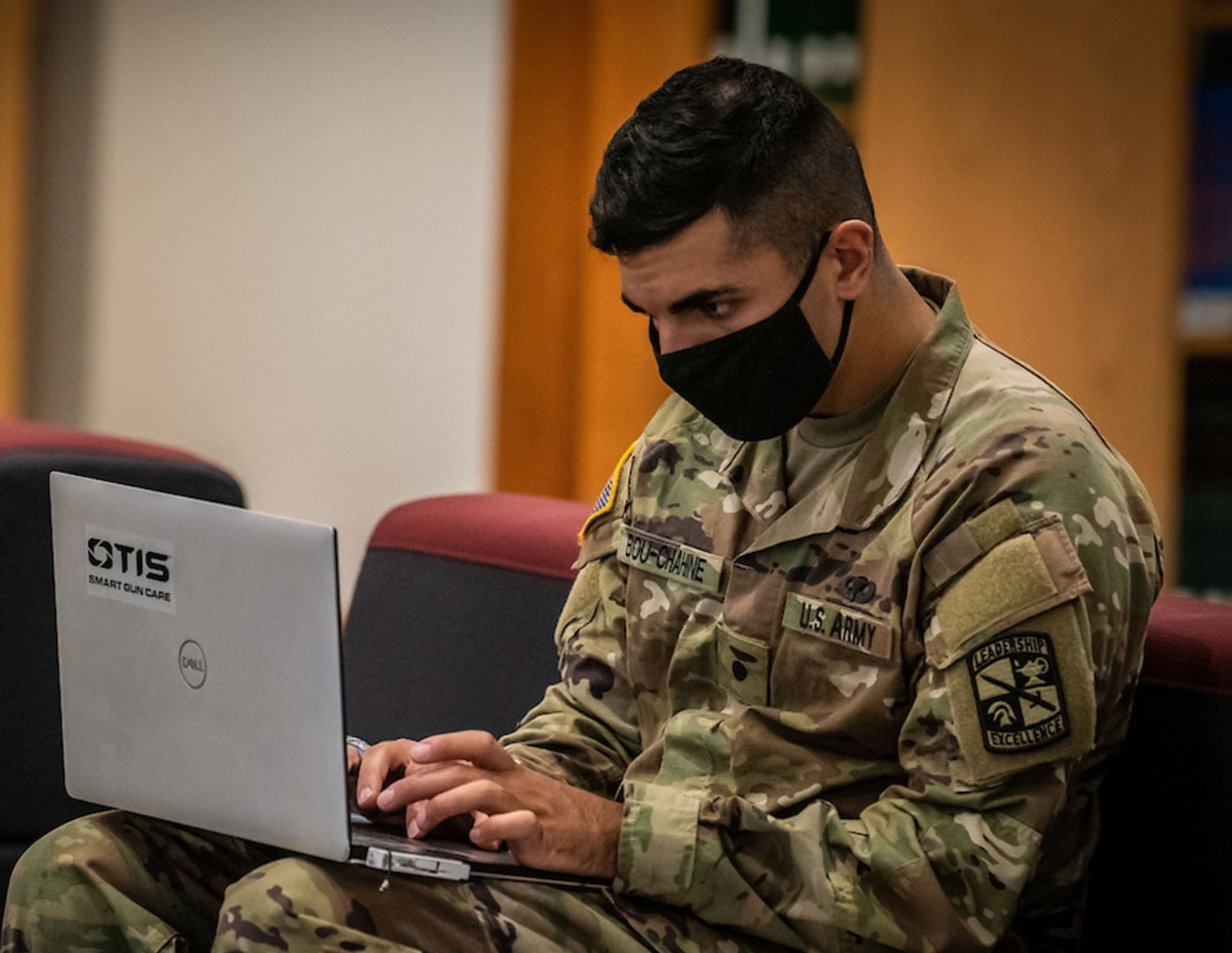 As much as students have gathered in classrooms and outdoor spaces to learn this new semester, they have gathered at Kreitzberg Library. On Tuesday, senior construction management majors Jorge Ulloa and Elias Bou-Chahine were working on a civil engineering assignment and freshman business major Danielle Guerrero was reading stories for her English class.

Guerrero, who is combining final-year studies at Northfield High School with first-year studies at Norwich, was reading “A&P” by the American author John Updike and “Araby” by the Irish author James Joyce. Both stories, she said, are about young men pining for unattainable young women. (Ah, love.)

“It’s a quiet and comfortable setting with enough room to social distance as requested,” he said.

Kreitzberg Library, named for principal donors Barbara and Fred Kreitzberg ’57, was designed in 1991, opened in 1993 and remade in 2015.

Guerrero, who hopes to someday work in events planning, said Kreitzberg was pleasant for thinking, reading and meeting. She’d settled into a quiet, sunny spot near a window and liked knowing she could find other students there.

Ulloa, who was working on a materials lab report for a soils compaction test, said Kreitzberg ably accommodated COVID-19-adjusted study.

Kreitzberg Library, named for principal donors Barbara and Fred Kreitzberg ’57, was first designed in 1991 and completed in 1993 for $8.1 million. Five years ago, the library was remade in a $6.8 million renovation enabled by the five-year $121 million Forging the Future campaign.

Forging the Future, which ended Dec. 31, 2019, and smashed its original $100 million goal, also enabled renovations for Schneider, Dewey and Ainsworth halls and the building of Mack Hall.

“Barbara and I have loved this library since its dedication in 1992,” Fred Kreitzberg said in September 2015. “We know that students have enjoyed using this library and hope that with the new renovations it will be even better-suited for our technologically advanced students.”

Kreitzberg Library’s renovation brought new workstations, group-study and collaborative-learning areas, new technology-enabled classrooms and a café, The Daily Grind. (Baristas there have been known to write affirmations on the cardboard sleeves that protect hands from hot paper cups). This semester, the café is widening student dining options by serving takeaway breakfasts. (On-site eating is banned temporarily).

“Those are the folks that bring money into the economy,” now-Vermont Gov. Scott said. “They have families. They have homes. They fill our schools.”

Dave Magida, Norwich’s former chief administrative officer, told the Norwich Guidon in November 2013 that students and faculty were surveyed to guide the renovations, which aimed to enable better information hunting in hard copy or electronic form, and to make the library an educational and social destination.

“We want it to be a place that’s vibrant and busy,” Magida, who received an honorary doctorate at Saturday’s COVID-19-postponed Commencement, told the Guidon. “It’s an exciting project (because the) library is the learning hub of the university.”