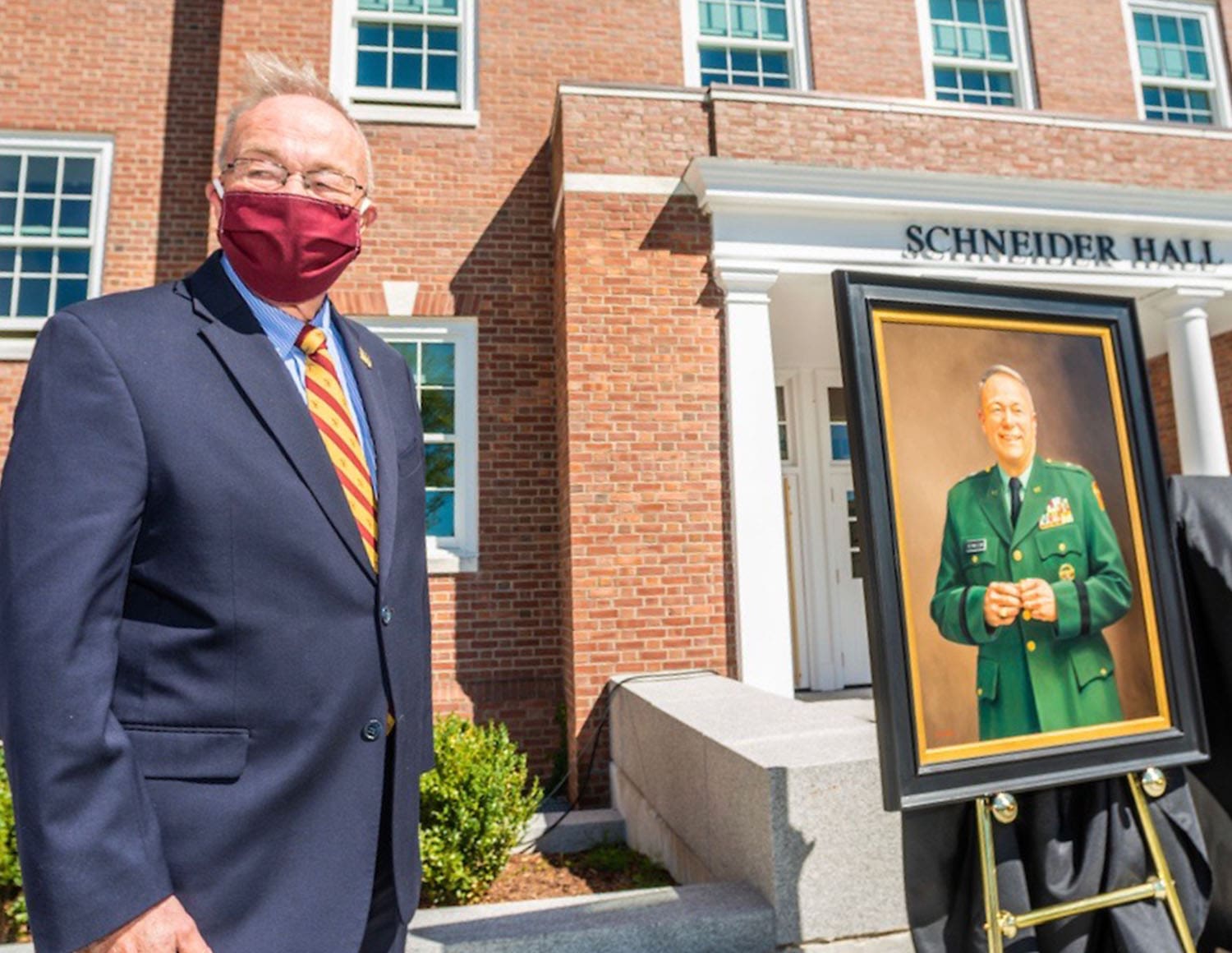 We honor you, President Emeritus Schneider

Saturday’s Commencement honored Norwich University’s Class of 2020, but also honored Richard W. Schneider, who retired in May after 28 years as president.

Late Saturday morning, before he joined President Mark C. Anarumo and Provost Sandra Affenito in honoring the new graduates in a virtual celebration, Schneider, now the president emeritus, and a collection of physically distanced, face-masked onlookers watched as the building that had been called North Hall was renamed Schneider Hall.

Black letters above the entrance showed the new name; a black scrim was ceremoniously yanked from a square form to reveal a portrait of Schneider that will hang inside the building. In the portrait, Schneider wears his green Vermont Militia uniform.

Schneider Hall had been called Webb Hall in honor of trustee J. Watson Webb until it was renamed North Hall in January 2019. The building underwent $13.5 million in renovations from 2017 to 2019, fueled by the five-year $121 million Forging the Future fundraising campaign, which Schneider oversaw and which ended Dec. 31, 2019. The building features traditional lecture halls and technology-enabled spaces for collaborative, hands-on learning. The building’s seminar and meeting rooms allow for high-level classroom discussions in smaller settings or for faculty-student meetings and academic mentoring.

The building’s makeover included the demolition of the 400-seat Dole Auditorium, which was attached to Schneider Hall and adjacent to Mack Hall.

Schneider also has a step named for him in the Bicentennial Stairs.

During Saturday’s Commencement, which was postponed from May because of the coronavirus pandemic, Schneider delivered the keynote address and received an honorary Doctor of Higher Education Administration degree.

Schneider, who was born in Queens, New York, graduated from the U.S. Coast Guard Academy in 1968. He was commissioned as an ensign in the Coast Guard and served eight years on active duty, including a tour of Vietnam; he retired from the Coast Guard Reserve as a rear admiral in July 1998.

Schneider earned a master’s degree in liberal studies from Wesleyan University and a doctorate in public policy from the University of Delaware.

During his presidency, Norwich’s 23rd, Schneider had a plethora of accomplishments, including boosting the university’s endowment fivefold and leading  five straight goal-exceeding fundraising campaigns. He oversaw expansions in enrollment, Corps of Cadets membership, academic majors and course offerings.

On Saturday, Anarumo said Schneider had eased his transition into Norwich’s presidency.

“I have a positive experience like no one else does,” Anarumo said. “That I get to come to be in charge of a high-performing team, of a place that is fiscally stable that is academically exceptional, all these things are wonderful.

“And … that I can talk to the person I replaced as a mentor and a friend and a guide is an unbelievable blessing.”

He also established the online College of Graduate and Continuing Studies, championed undergraduate research and study away and abroad programs and led development of Norwich After Next, a plan released in 2018 to ensure the university’s prosperity through 2035.

“You proudly carried on the tradition Norwich University founder Capt. Alden Partridge began more than 200 years ago of developing citizen-soldiers,” Affenito, who is also dean of faculty, said before Schneider’s honorary degree bestowal. “Through your extensive military experience serving in the U.S. Coast Guard and Coast Guard Reserve and in academia, you epitomized Norwich’s unique position in higher education.”

Later, it was Schneider’s turn to speak. He stripped off his fittingly Norwich-maroon face mask, smiled at the gathered, masked and physically distanced onlookers, who included his wife, Jaime and his daughters.

“It is so nice to be with people,” said Schneider, who continued the Norwich color scheme with his maroon-and-gold necktie. “We have missed you desperately … many of you I’ve grown up with, and what a great honor that is.”

After thanking the university’s trustees for honoring him, Schneider, who’s spending his retirement in Lake Dunmore in Addison County, told a story about Gordon Sullivan, a 1959 Norwich University graduate and longtime former chairman of the board of trustees. Schneider recalled how Gordon had felt humbled and awed by seeing his name on the Sullivan Museum and History Center for the first time.

“The night before the dedication, Gordon and I walked up on the (Upper Parade Ground),” Schneider recalled. “He had not seen his name on the building. And we got to the steps, and it was unbelievably important.”

“Now I know how he felt,” he said. “He stopped breathing. That’s how you feel.”

Click here to see the full photo gallery from over the weekend.