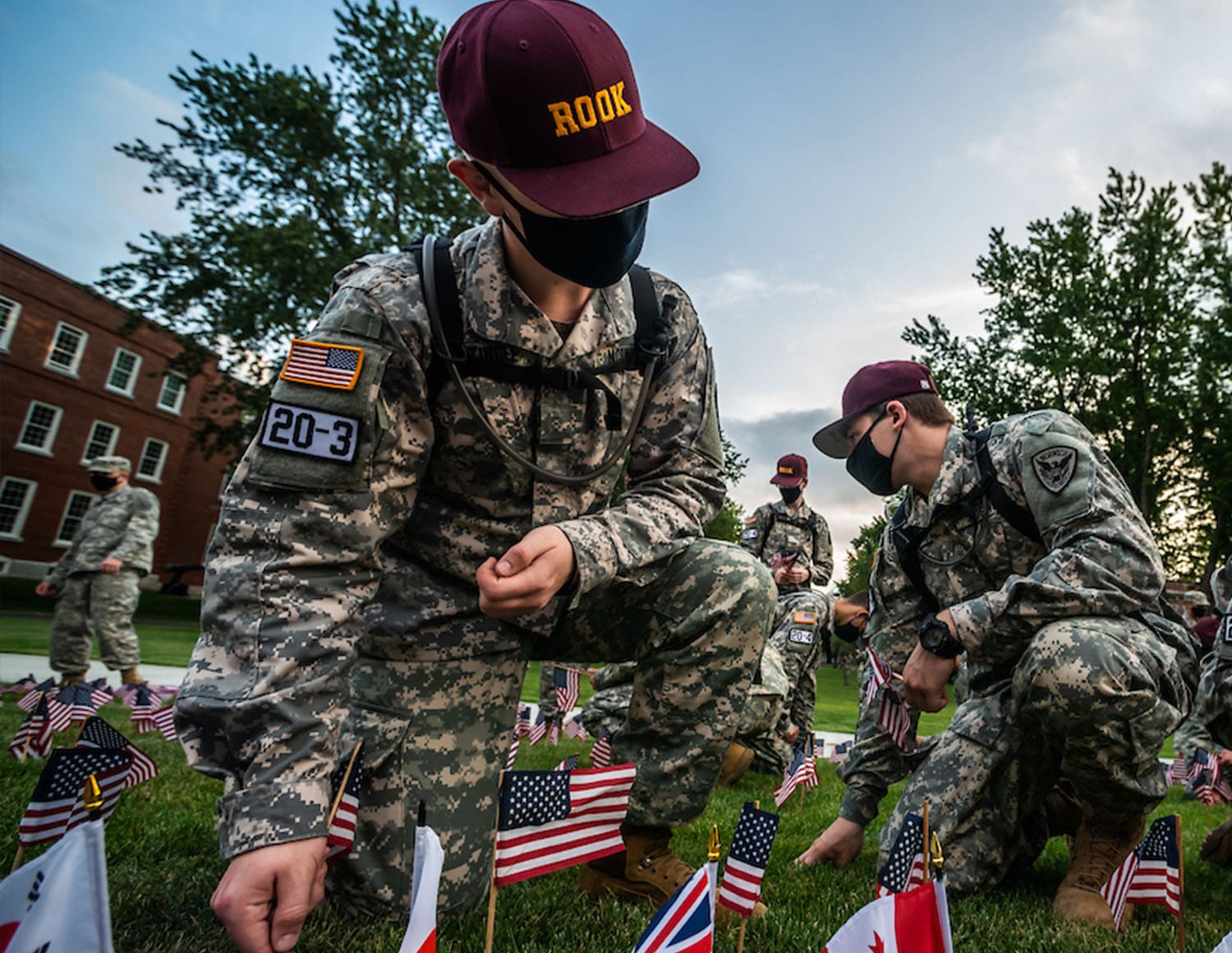 History had its eye on us and we on it as we studied, gathered and learned together this past week (and slightly before).

Speaking of cadets, military labs started for ROTC students Tuesday. Photographer Mark Collier’s lens captured the Army and Air Force ROTC cadets during their first lab sessions of the semester; cadets greeted their leaders, met squads and heard expectations for the semester. These labs are one way our students learn to lead.

This transition was finalized at 11:30 a.m. EDT, as Norwich University President Mark Anarumo, who retired from the Air Force as a colonel in August, administered Olsen’s oath. Olsen, who teaches aerospace studies at Norwich, became the first Space Force officer to take his or her oath in Vermont, and is also the lone Space Force officer stationed in the state.

On Thursday night, many members of the Corps joined other students, some from the Politeia political science club to plant miniature U.S. flags to honor the victims of the Sept. 11, 2001, terrorist attacks. Cadets interviewed said they joined the effort to honor the dead and to unify.

“I believe it is of utmost importance to remember the extraordinary heroism, fortitude, and unity from that day,” said Olivia Kelliher, a junior mechanical engineering major and cadet.

Looking toward futures, the Norwich’s Career and Internship Center touted plans for Careerpalooza, a monthlong virtual event in October that will connect Norwich students with employee-seeking companies and job recruiters.

In the week ahead, we’ll recap the virtual Commencement ceremony, which will run Saturday. President Emeritus Richard W. Schneider will deliver the keynote address for the 2 p.m. event, which was postponed from May because of the coronavirus pandemic.

To coincide with Commencement, the building known as Webb/North Hall will be renamed Schneider Hall. A renaming ceremony will run at 11:45 a.m. Saturday.

The coming week will bring a virtual Introduction to Norwich webinar from the Admissions Office. The event, from 9 to 10 p.m. Wednesday, will deliver information on the university’s academic programs, athletics, financial aid, the Corps of Cadets and more. Click here to register.

And click here to see the full photo gallery from Sept. 10.