On Sept. 11, a moment of solemn, unified reflection 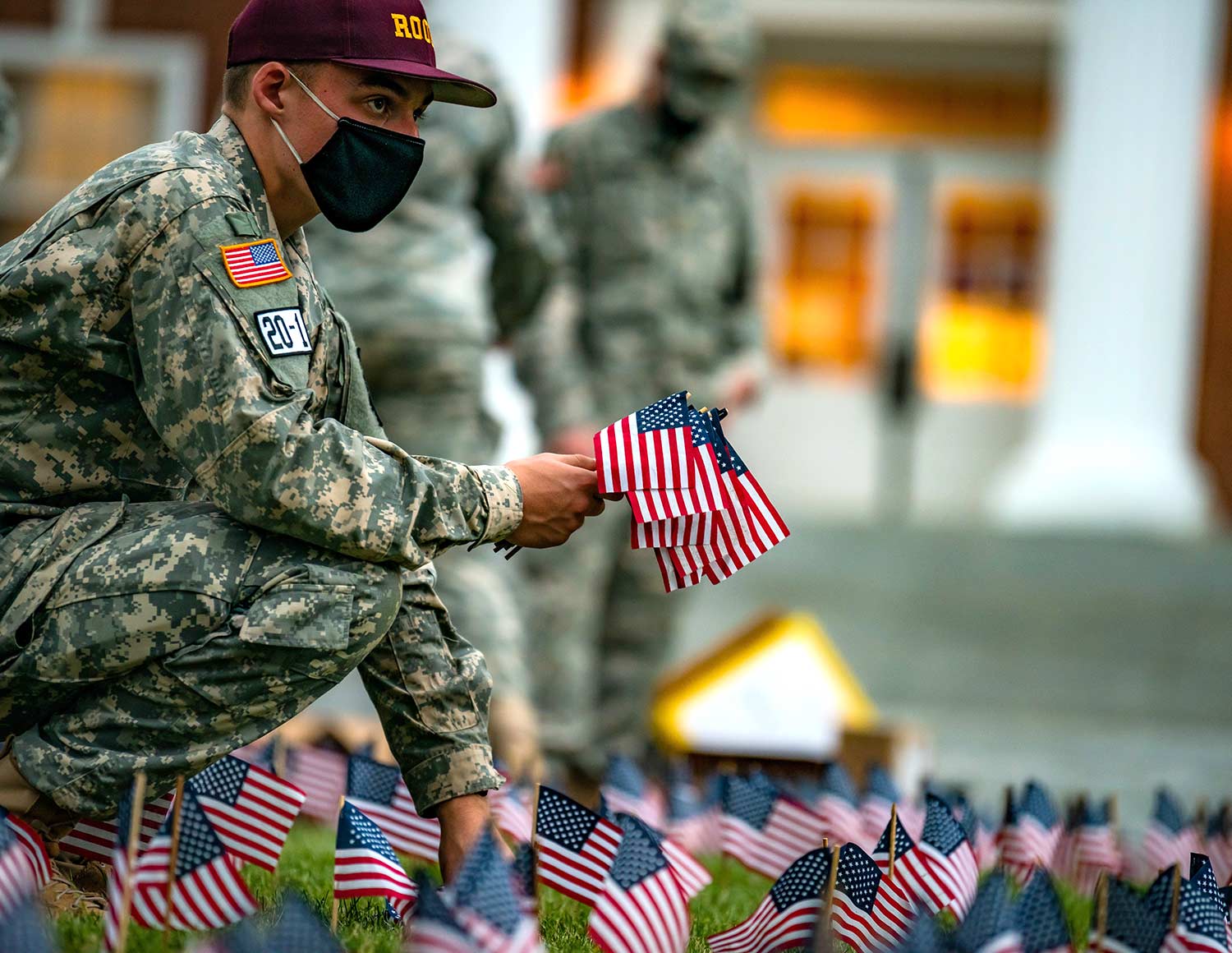 Anyone who turns on a television or reads a newsfeed these days knows, America has been struggling with the stress of political division on top of the coronavirus pandemic. With the U.S. presidential election less than 60 days off, rhetoric has intensified toward crescendo. But on Friday, Norwich University will pause to reflect on a moment that has unified America — remembering the Sept. 11, 2001, terrorist attacks.

Starting at 6 p.m. Thursday, carrying on a tradition started in 2008, members of Norwich’s Political Science Club, aka Politeia, members of the Corps of Cadets and other student volunteers began planting 2,977 miniature American flags — one for each of the victims killed in the attacks. Deaths occurred at the World Trade Center, Pentagon and in Pennsylvania; four planes and 19 terrorists linked to the extremist group al-Qaida were involved. More than $10 billion in property was damaged.

The flags went on the Upper Parade Ground’s northern section. (In 2019, in an exception, grounds resodding pushed the flags to grass beds outside Jackman Hall.)

“I am a firm believer that no matter how divided we may be, it is possible to still have hope and faith in humanity,” Olivia Kelliher, Norwich junior and member of the University’s Corps of Cadets

At midnight Thursday, seniors in the Corps began marching vigil tours, slow, ceremonial half-hour marches on the walkway ringing the Upper Parade Ground. Sam Carlson, a cadet and Politeia member, said 48 students will participate in the vigil tours, wearing face masks to comply with coronavirus pandemic-related Vermont Health Department guidelines. Because the cadets walked one at a time, proper physical distance was observed.

At 8:46 a.m. Friday, a reflection moment was held near the flags to mark the time the first hijacked plane hit the Twin Towers’ north tower. As in past years, standard-size flags mounted on campus will fly at half-staff.

Norwich’s miniature flag display will be removed by noon Saturday.

Olivia Kelliher, a junior mechanical engineering major and member of the Corps of Cadets, said she joined the flag planting to remember the people who died and to show her hope that America can surmount its rifts.

“I believe it is of utmost importance to remember the extraordinary heroism, fortitude, and unity from that day,” Kelliher, a first-time flag planter, wrote in an email. “This past year has put such a divide in our country and its people, and it is important to remember an event that will give us perspective on how we can unite as a community and nation.

“I am a firm believer that no matter how divided we may be, it is possible to still have hope and faith in humanity,” she added. “Remembering 9/11 and the tragedy that happened on that day allows us to thank those who sacrificed their lives but also gives the country hope that even in our darkest times we can still come together as one.”

Because he was 2 years old on 9/11, Carlson said he has no memories of that day. However, he said he understands the attacks’ lasting effects.

“The stories of heroism, sacrifice, and bravery from that event as well as those who served because of that event is still an inspiration for me to this day,” Carlson wrote in an email.

When Norwich began planting the flags in 2008, Jagemann said Anello followed the lead of the Young America’s Foundation’s 9/11: Never Forget Project, started in 2003 to encourage the commemoration. The foundation, born as the Young Americans for Freedom on Sept. 11, 1960, in the home of William F. Buckley Jr., is celebrating its 50th anniversary.

Buckley (1925-2008), an author and commentator, founded the National Review, a magazine that became influential in conservative political circles.

In a Tuesday website post, the nonprofit Reston, Virginia-based Young America’s Foundation said more than 12 million flags have been planted on campus quads and high school sidewalks since 9/11: Never Forget’s inception. The foundation said it will plant flags this year on the lawn at President Ronald Reagan’s Rancho del Cielo, northwest of Santa Barbara, California, and at the Capitol in Washington, D.C.

“In trying and divisive times such as these,” Young America’s Foundation spokesman Spencer Brown wrote, “uniting Americans to honor a day of unbearable loss that brought unbreakable unity reminds us that what we have in common matters more than our disagreements: We are all Americans — a fact worth being proud of.”

The Pentagon attack, involving one hijacked jet, killed 189 people. One hundred twenty-five of the dead were in the building; 64 were on the plane, American Airlines Flight 77, including five hijackers.

Also, he said, although the attacks brought a positive moment of we’re-all-together American unity, they also had a divisive byproduct, leaving Muslims open to unfair broad-brush condemnation.

“What’s most important is not the space where the flag planting is happening,” Jagemann said, “but in other spaces — the classrooms and the dorms where the conversations are happening and students are reflecting on the news of the day.”

The reflections were visceral for Jack LaPage, a sophomore criminal justice major from Bangor, Maine. Although he was born 11 days after the attacks, he remembers his mother’s harrowing recounting.

“(My parents) looked down at me and promised that though the world was suddenly uncertain and frightening, they would bring me into this world and give me the best life they could offer.” Jack LePage, Norwich sophomore and member of the Corps of Cadets

She was at her job, working with special-needs children as a developmental therapist. LaPage said his mother was between appointments and in her office’s break room when his father called her and told her to turn on the news.

“At that moment, her supervisor ran into the breakroom and turned on the tv just in time for the second plane to hit,” LePage wrote in an email. “My mother told me about the instant feeling of dread and hopelessness that ran through her when that happened. But she immediately calmed down thinking of all the kids that were in their care.”

LePage said his mother recalled rallying her fellow co-workers, who were staring at the television dumbfounded, and getting them to call parents to pick up their children.

“When my parents got home and finally saw each other they burst into tears, thankful that the other was OK,” LePage wrote. “They looked down at me and promised that though the world was suddenly uncertain and frightening, they would bring me into this world and give me the best life they could offer.”

READ MORE ON THE CORPS OF CADETS: