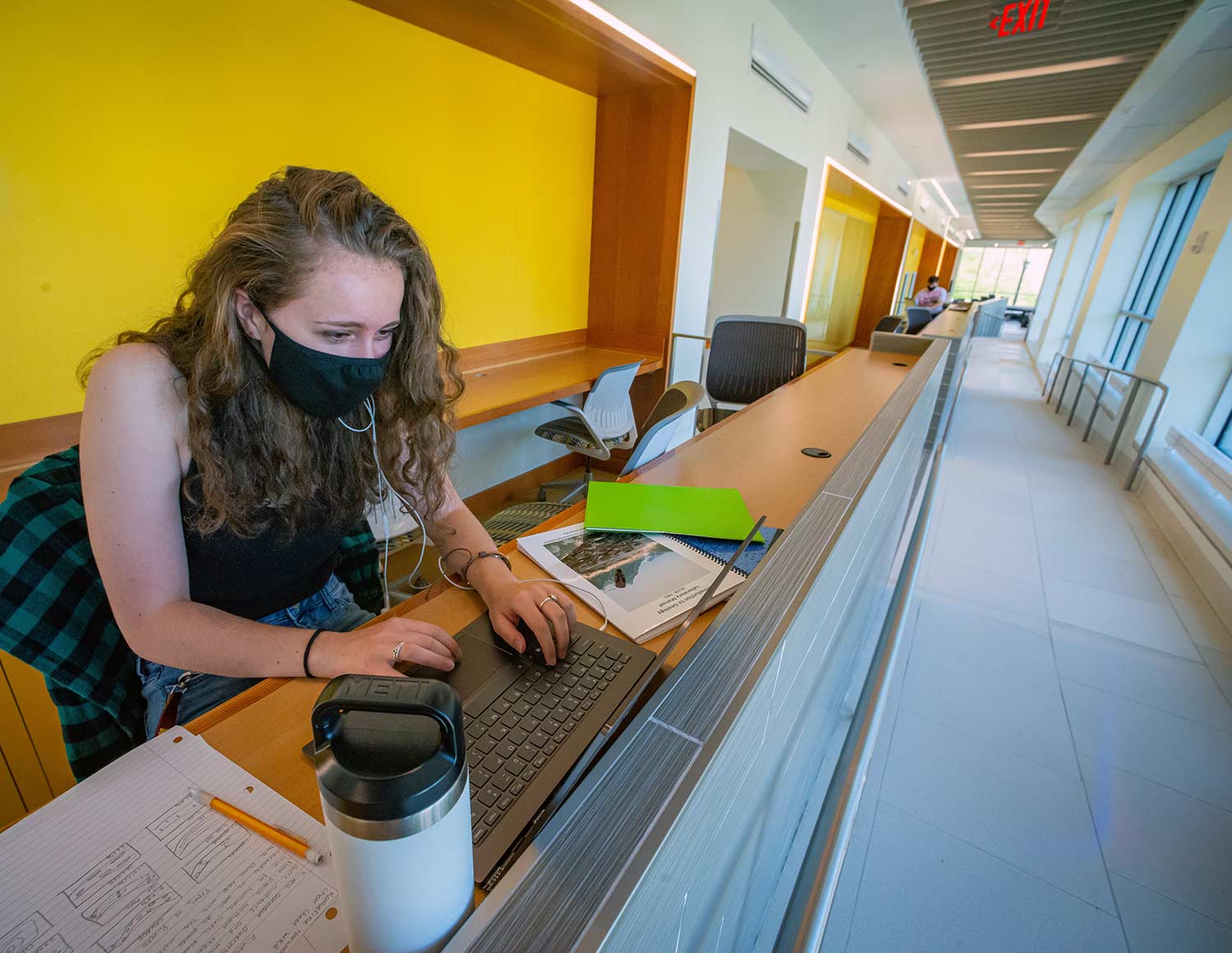 A properly masked student takes advantage of Mack Hall’s Wi-Fi connection and counter space to use her laptop computer to work on an assignment Wednesday. Mack, which is nearing the second anniversary of its official opening, accommodates studying, gathering, performing and, most importantly, learning.

Mack Hall was named for Robert Mack ’64 H’06 and Tammie Mack, who donated $5 million to Forging the Future in January 2015. Robert Mack served in the U.S. Army Corps of Engineers and as CEO of a health management organization in Southern California.

“(Robert and Tammie Mack) have given much to the university in the areas of enrollment, education and athletics, and their support has strengthened and transformed our institution. We could not be more grateful for their support.” Norwich University President Emeritus Richard W. Schneider

A Sept. 13, 2020, Norwich Facebook post marked Mack Hall’s official opening, which featured the unveiling of “Winter Twilight at Norwich University,” a commemorative mural by Vermont artist Sabra Field, and thanks to the Macks.

“Bob Mack has faithfully supported Norwich by establishing a scholarship, serving as a trustee, Norwich ambassador, president of the Friends of the Kreitzberg Library, chairman of the NU Applied Research Institute, and supporter of the university’s Archives and Special Collections,” the post said. “Thank you, Bob and Tammie, for what you’ve done for Norwich and all you do to enable our students to build our society, serve our country and better our world.”

In a January 2015 statement issued after the Macks’ donation, now-President Emeritus Richard W. Schneider said, “Bob and Tammie Mack are true leaders to our founding father’s tradition of service to others and nation before self.

“They have given much to the University in the areas of enrollment, education and athletics,” Schneider added, “and their support has strengthened and transformed our institution. We could not be more grateful for their support.”

Mack’s Thaddeus Buczko war room, which seats 24 students and enables cyberwar games and cyberpenetration tests, is named for Thaddeus Buczko ’47, a retired civil servant and prominent Massachusetts judge. The war room was dedicated to Buczko in a Nov. 10, 2019, ceremony. (Buczko was also honored with a Bicentennial Stairs step during September 2019’s Homecoming celebration).

Facilities Operations Vice President Bizhan Yahyazadeh told the Norwich Guidon student newspaper in October 2018 that Mack was seven years in planning. He added that a committee including the provost, school deans, faculty and the Internet Technology and Facilities Operations departments guided the project.

Ground was broken for the building on April 28, 2017. An Aug. 27, 2018, soft opening celebration featured an ice cream social and building tours.

Jeffry Casey, an English professor and theatre program director, told the Guidon that Mack’s auditorium, which replaced Webb Hall’s Dole Auditorium as Norwich’s primary theatre space, would open new opportunities for meetings, conferences and theatrical performance and let the greater Norwich and Northfield, Vermont, communities see what the university was up to. (This was, of course, pre-COVID-19).

Kate Donley, an English lecturer, told the Guidon that Mack’s classrooms, with their upgraded technology, would intensify active learning.

“I think it’s a campus building we can all rally around. It’s a beautiful, educational and technical space and I’m excited about it,” she told the Guidon.