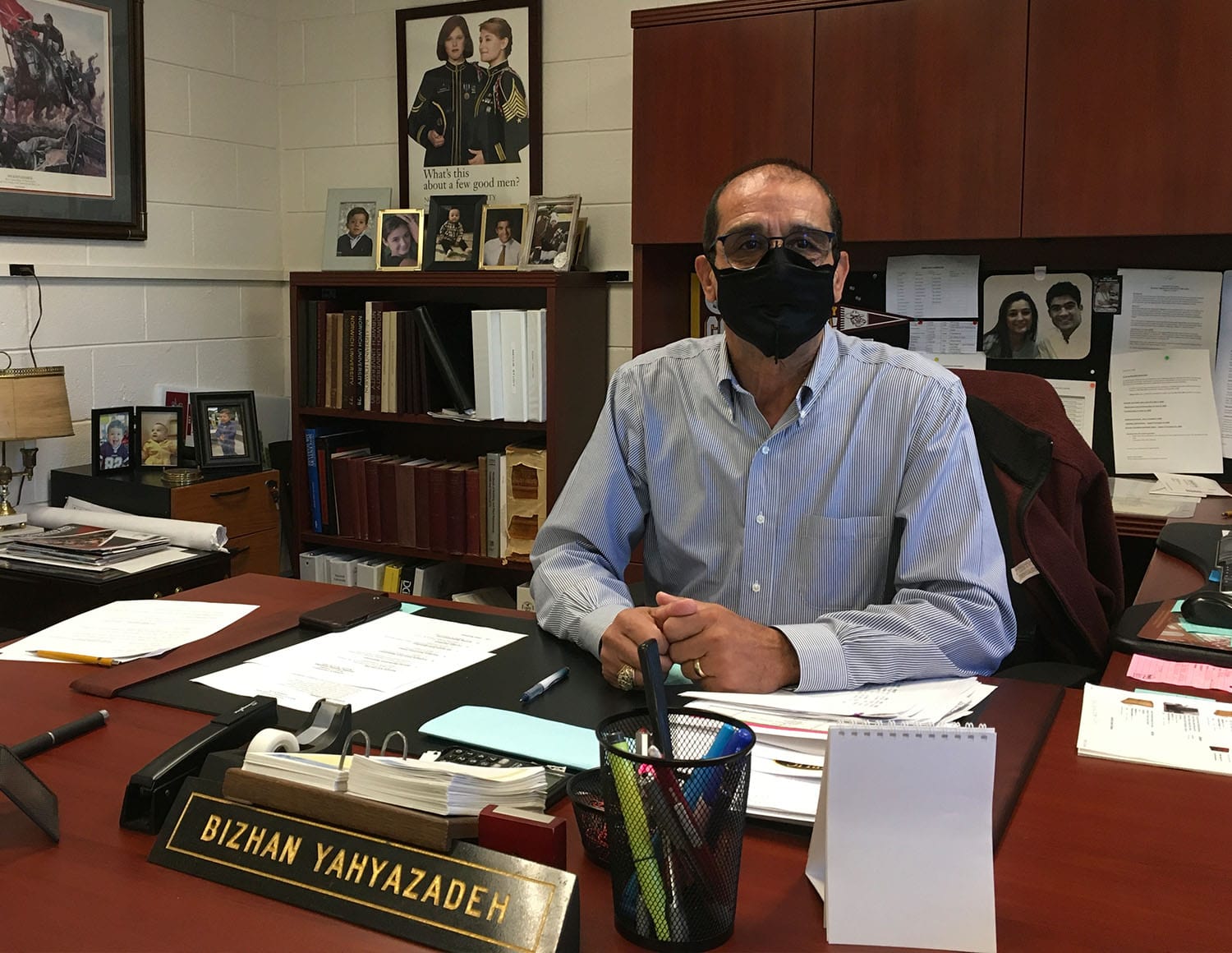 A look at the team that worked tirelessly to get campus up and running, outfitted for COVID-19 prevention

“When planning for COVID, there was no playbook,” Norwich Assistant Vice President of Facilities Operations Bill Nash said in an email last week. “We had to write our own playbook. We made changes and adapted as the summer went on.”

“This is the kind of department that’s ready for emergencies. We’re built around that.”Justin Miller, Facilities Operations scheduler

The hoses shoot a mist called Miracle that gets electrostatically charged as it passes through the nozzle. The charged droplets in the mist repel one another but cling electromagnetically to their targets, enabling 360-degree coverage and on-contact disinfection.

When July arrived, talk time was over; students were due in five short weeks. Rooms were cleaned, grounds were tended and patrolled, mail was sorted and sent, building systems were readied and educational signs posted. Nash said the staff adapted as plans shifted daily, or hourly.

“As essential employees, we have been here every day,” Nash said. “Our staff have been outstanding throughout this ordeal,” he said. “It has been a big learning curve for all.”

Custodial Services Manager Gloria Marceau said imagining the strategy seemed hard at first as everyone thought, “How are we going to do all this extra work?” Facilities Operations Vice President Bizhan Yahyazadeh, who’d worked many jobs in his 40 years at Norwich ­— grounds crew, electrician, facilities operations — knew he’d help figure it out.

Yahyazadeh acknowledged that the COVID-19 work was serious and emotional, given the coronavirus’ potential to kill. It was also challengingly new. But, he said, wary as they were, FacOps staff members carried on professionally, following examples set by university leaders. Justin Miller, Facilities Operations’ scheduler and a 10-year Norwich employee, said the team is built for challenges.

“This is the kind of department that’s ready for emergencies,” he said. “We’re built around that.”

Hatch, a 30-year Norwich employee, fixes doors, windows, ceiling tiles, anything in disrepair. Lately, he’s built COVID-19 protections — he spent a month measuring, cutting, sanding and staining to build more than 50 plexiglass screens for classrooms and offices. With every task, he minds details and delivers his best; he wants the person receiving the work to feel special.

Hatch, whose wife, daughter and son are Norwich graduates, isn’t kidding when he says he’s doing the work of three people. One carpenter retired and one left the university between the academic years. Nevertheless, he persists.

George Sanders, an 18-year Norwich employee, has many duties: grounds weeding, vehicle sanitizing, office furniture moving, event setup and teardown (those duties have been lessened this semester because of the pandemic). He said he’s been doing everything he always did, but distanced and in masks.

With occasional uncertainty has come variety.

“It’s exciting,” he said. “You never know what’s going to happen next.”

Joseph LaValley, a two-year Norwich employee and custodian, by contrast, says he often does know what will happen next — there’ll be another floor to clean, another shower to scrub, more trash to collect in the two dormitories he minds. There are new COVID-19 steps now — every touched surface gets electrostatic spray — door handles, soda machine buttons.

LaValley, whose wife, Shelly is also a Norwich custodian, said students have shown respect for his work. Packs of rooks have lately stopped him to deliver salvos of thanks. Last year, a stairs-descending student in South Hall noticed LaValley mopping the lobby and changed course, going back upstairs, across a hall and out a different door to avoid the wet floor.

“It sold me on being here,” LaValley said of the experience.

Shelly LaValley said that with so many hallways, stairways, byways, to clean, she’s tired, but motivated.

Melissa Godin, the nighttime lead custodian, picks up where daytime workers like the LaValleys leave off, so campus wakes to clean, sanitized spaces. She said she’s fine being mostly invisible; she wants her work to show in safe, healthy students.

Colleagues do, too, she said.

“As a team, we do excellent,” she said. “there’s really good communication, between us all. If there’s extra stuff that needs to be done … I don’t have to delegate. Everybody steps up, because we’re all happy with each other.”

Student lines for mail and mailroom hours this semester will be shorter than in previous semesters. Package piles, though, will be taller; with students confined to campus, they’ve been ordering more stuff. Carleton said he expects 800 to 1,000 packages to come through the mailroom a day when the semester starts, some of it loaded with weighty goods from home or online merchants.

Clarke Haywood, a Norwich public safety officer since 2018 and a Norwich graduate since 2012, said the lifting, physical and figurative, fits the university’s “I Will Try” ethos. He said he sees his duties going beyond the patrols he makes, the body cam footage he checks, the parking permit program he manages, the service calls he answers. Like Godin, he wants the students to feel safe.

“Being that I was in the Corps … and I want to build that trust,” he said. “There are many great alums and non alums (on campus) who want to help. That’s what I get really the most satisfaction from, helping the students, giving advice as time allows.”

The FacOps teammates seemed happy to have campus stirring toward full activity. Marceau said the team has found its groove and Carleton said the students bring structure to the workers’ schedules and energy and humor to their days.

“The students are our focus,” he said. “They come and go in four years, but if you get to be positive role models to them, it makes it, it makes my whole job.”