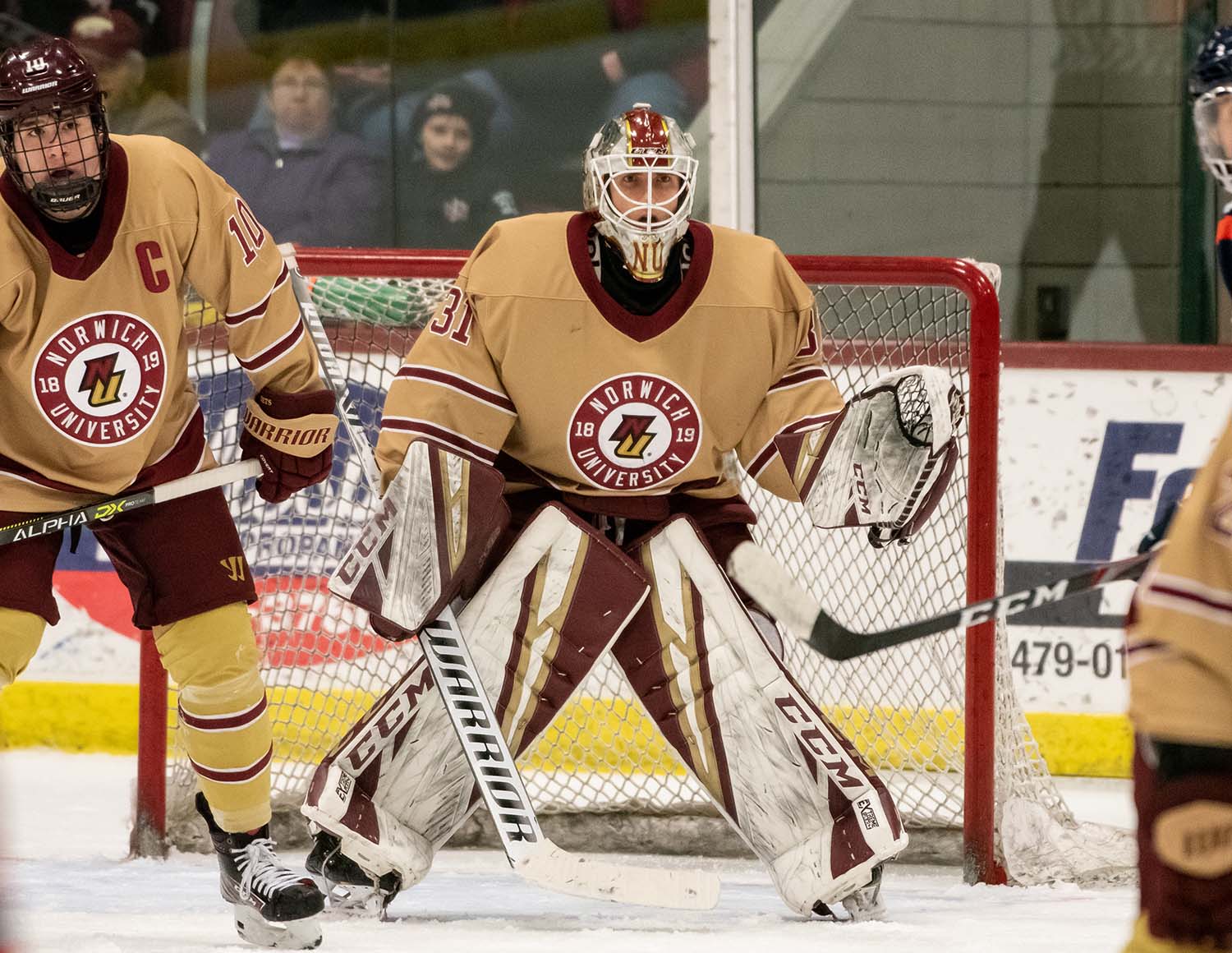 Aubrun and Chicoine mark the eighth and ninth Academic All-Americans in men’s ice hockey history, the most out of all NU varsity athletic programs.

“I would like to congratulate Tom and Gabriel on this tremendous achievement after they have shown tremendous leadership on and off the ice for our team.” Cam Ellsworth, Norwich University men’s ice hockey head coach

“I would like to congratulate Tom and Gabriel on this tremendous achievement after they have shown tremendous leadership on and off the ice for our team,” Norwich University men’s ice hockey coach Cam Ellsworth said. “Their athletic achievements are well documented, but it is nice to see them get recognized for the diligent work that they have done in the classroom as well.”

Off the ice, Aubrun carried a 3.77 cumulative GPA as a business management major. On the ice in 2019-20, he authored one of the most historic seasons in NCAA hockey history.

He is a two-time NEHC Player/Goalie of the Year, two-time NEHC Tournament Most Valuable Player and was a member of the 2017 NCAA Division III National Championship team.

In April, Aubrun signed a two-year pro contract with the Rockford (Illinois) IceHogs of the American Hockey League, an affiliate of the National Hockey League’s Chicago Blackhawks.

Aubrun is the third player in Norwich University men’s hockey history to sign an AHL deal immediately after concluding his collegiate career. Aubrun joins William Pelletier ’17, who also signed with Rockford and enjoyed a successful three-year career, as well as Frank Simonetti ’84, who signed immediately with the Providence Bruins.

Meanwhile, Chicoine is a 3.96 mechanical engineering major off the ice and on the ice he was one of the best defensemen in NCAA Division III this past season.

Chicoine was named a AHCA first-team All-American after ranking fourth in the country with five goals and 26 assists for 31 points.

Chicoine was also an All-USCHO Second Team selection in 2019-20 after he and Aubrun helped guide Norwich to a 24-2-2 record.