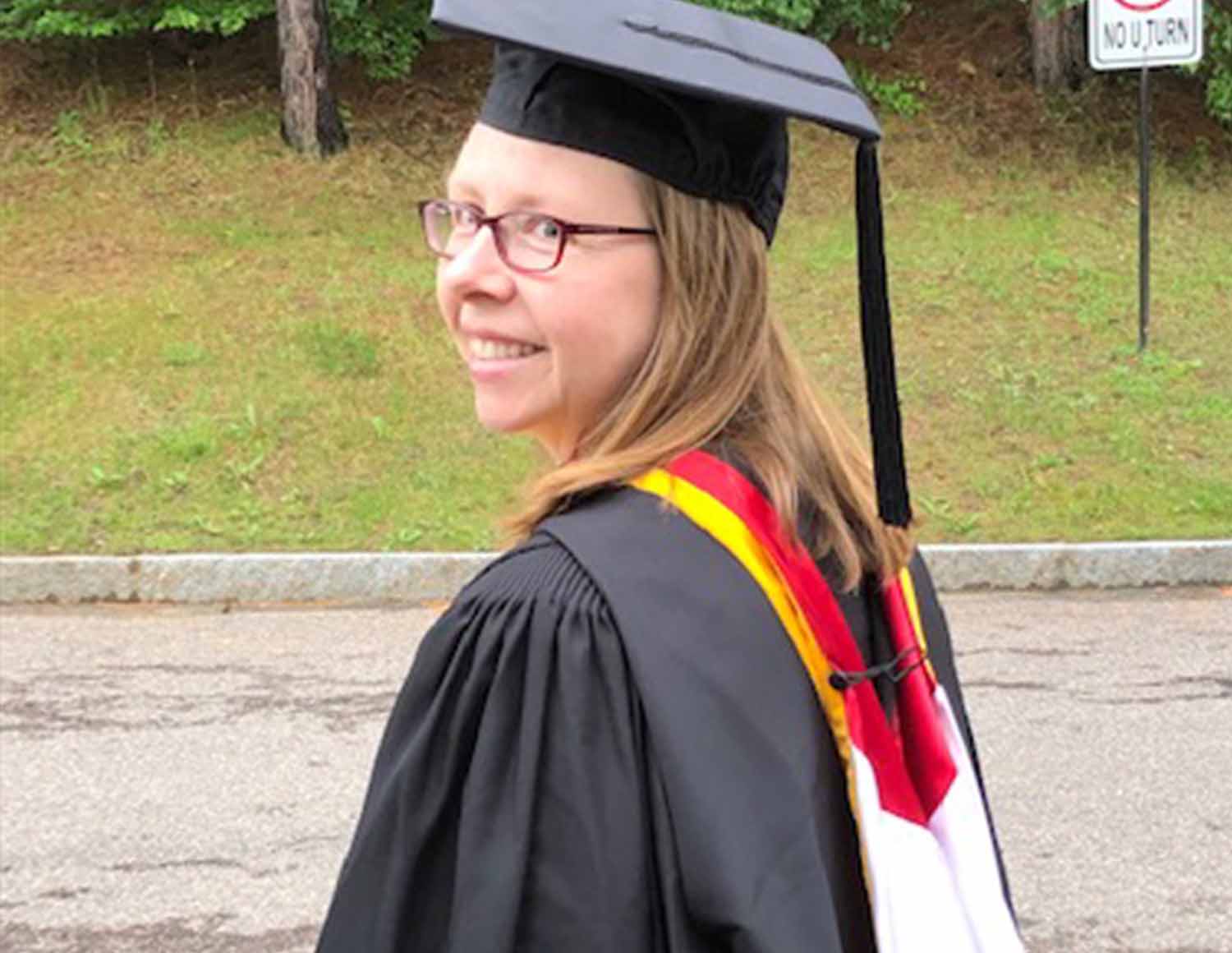 Like solving puzzles? Picture yourself keeping your community, and world, safer? Kathleen Moriarty does all of these things as a high-level professional in the burgeoning cybersecurity industry. And she sees a bright employment future for inspired Norwich University students in the new School of Cybersecurity, Data Science and Computing, especially women.

Moriarty, who serves on the Master of Science in Cybersecurity Advisory Board at Norwich and was a guest at the 2019 Residency Conference, proved that any perceived glass ceiling in cybersecurity is breachable.

Moriarty develops technology strategy and standards as global lead security architect with Dell EMC Office of the CTO in Hopkinton, Massachusetts. From 2014 through 2018, she was area director of the Internet Engineering Task Force, an organization developing and promoting voluntary internet standards. Based on the webpage, she’s the lone woman cybersecurity program faculty member for Georgetown University’s School of Continuing Studies.

“We hope to encourage more and more women to enter this growing field of study.” Rosemary Pelletier, director, Master of Public Administration and Master of Science in Cybersecurity programs, Norwich University

In July 2019, she earned a spot in the prestigious “Women Know Cyber” book for educators and professionals, which is distributed to cybersecurity industries nationwide. Moriarty was chosen from among more than 1,000 security professionals to receive the honor.

Moriarty, who was on campus last year in June for Norwich’s Cybersecurity Summit and the College of Graduate and Continuing Studies’ Residency Conference said her strong voice and unflagging determination informed her career path and stoked her success — both traits befitting Norwich’s “I will try” ethos.

“We will be doing our best to ensure that we provide (students) with a valuable virtual experience,” Liptak said recently.

Meanwhile, majoring in computer science wasn’t top of mind when Moriarty started at Siena College near Albany, New York; she was a math major. She said she didn’t much use, or gain affinity for, the gadgets until her sophomore year, after she took her third computer science class.

At Siena, Moriarty earned two certificates in computer science, including one in information systems management. She had the equivalent credits in math and computer science, but Siena students can declare only one major for their degree. She left it declared as mathematics, feeling it was the stronger degree.

She came to computers through math — a passion instilled by a math teacher at Sacred Heart Academy, the all-girls Catholic high school she attended in Hempstead, New York. Moriarty said she scored 100 percent on her New York state Regents exam.

“I had a really good teacher, I still remember her name, who taught math in a way that worked for me, and everyone else in the room,” she said. “From there, my love of math grew.”

Moriarty acknowledged that Norwich has gained prominence as a go-to academy for cybersecurity. The Ponemon Institute, a Traverse City, Michigan, institution conducting independent research on data protection and emerging information technologies, ranked Norwich No. 2 in the United States in its 2014 “Best Schools” report. The school’s programs consistently rank among the best in the nation for cybersecurity education.

“Leslie and Kathleen also show other women that women belong in this field,” she said. “We hope to encourage more and more women to enter this growing field of study.”

“It’s an ever-changing field … threat actors continue to evolve,” Moriarty said, “and the responses to them need to continue to evolve. Studying cybersecurity gives you an opportunity to keep your mind in shape … you’ll never get bored, you’ll be making a difference and if you’re any good at it, you will have a job.

“The range of professions is so broad,” she added. “There are so many directions to go in to fight cybercrime and have an impact.”

Women will fill more of those openings in the future, Cybersecurity Ventures forecasts, occupying more than 20 percent of the global cybersecurity workforce by the end of 2019, up from the 11 percent Santa Clara, California, research firm Frost and Sullivan estimated in 2013.

“The 20 percent figure is still way too low, and our industry needs to continue pushing to include more women in cyber,” the book’s preface reads. “But heightened awareness on the topic — led by numerous women in cyber associations and initiatives — has helped move the needle in a positive direction.”

“Their connection to the university was huge; it was really powerful. It was wonderful to see,” she said. “Since they had studied online, that connection may not have been as strong if they did not have the Residency week.”