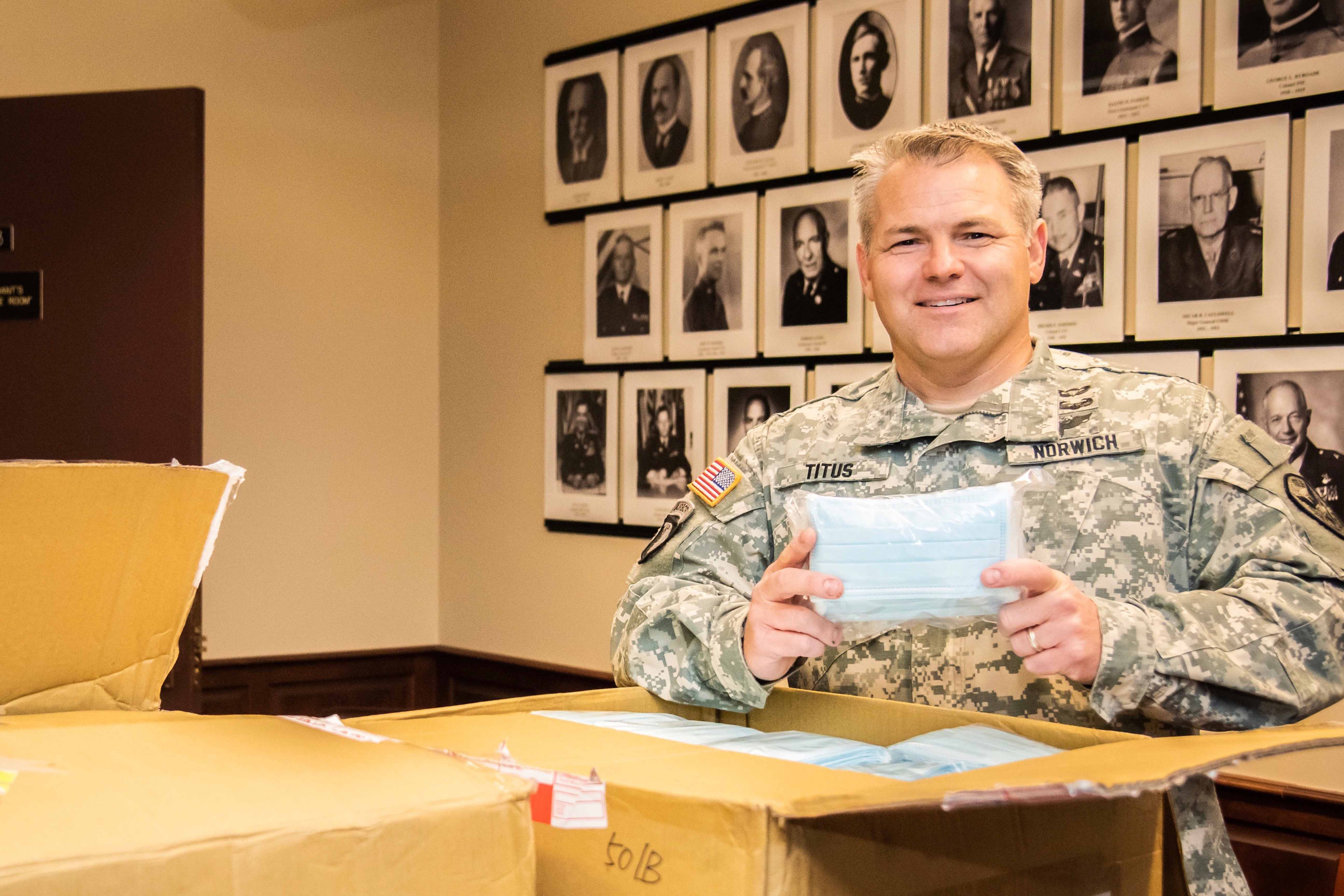 The gift, which arrived in Northfield by postal mail by FedEx, came through the Republic of China’s official Boston-based representative, the Taipei Economic and Cultural Office and its director general, Douglas Hsu.

Norwich has a long-standing partnership with the Republic of China Military Academy. Each year, the academy sends four cadets to  Norwich to study for bachelor’s degrees and one cadet to study on exchange. Norwich has also signed an agreement with the National Defense University and received two cadets for the first time last fall.

“(The mask donation is) extremely generous and shows our solid relations with the Taiwanese government and its military school.” Lt. Col. Michael Titus, Norwich University commandant of cadets

In April, Norwich College of Science and Mathematics Dean Michael McGinnis acknowledged that the university would need to replace the masks it donated to support coronavirus care by Gifford Medical Center in Randolph, Vermont. But, he said, that would have been true also if students’ spring semester lab sessions had continued uninterrupted by the coronavirus shutdown.

McGinnis added that the Chemistry and Biochemistry; Biology; and Health and Human Performance departments had retained enough masks to last the summer and open the fall semester.

Col. Michael Titus, commandant of Norwich’s Corps of Cadets, said the mask donation is welcome and timely, offering cost savings as the university works to reopen campus for the fall semester.

“It’s extremely generous,” Titus said, “and shows our solid relations with the Taiwanese government and its military school.”

Hsu has long advocated for Norwich. In 2018, he delivered a keynote speech on campus for students receiving Project GO scholarships. (GO stands for global officer.) Project GO, a Defense Department initiative sponsored by the Defense Language and National Security Education Office and administered by the Institute of International Education provides institutional grants to U.S. colleges and universities with large ROTC student enrollments.

Norwich uses Project GO money to support study of Mandarin Chinese; 2019’s Mandarin language student cohort studied in Taiwan. Thy Yang, Norwich’s assistant vice president of international education, said Hsu had been scheduled to speak to the Project GO scholarships recipients on campus this spring, but didn’t because of the campus coronavirus closure.

Last fall, Hsu’s office invited Norwich students to two ceremonies in Boston. On Oct. 4, four Taiwanese members of the Corps of Cadets held Republic of China and U.S. flags during a reception for the 108th National Day of the Republic of China at the Boston Park Plaza Hotel.

On Oct. 5, the office included seven Taiwanese cadets participating in a National Day of Republic of China parade, organized by the Chinese Consolidated Benevolent Association. Fifty Republic of China overseas community and student groups attended the parade, which proceeded from Chinatown to City Hall Plaza in Boston.

The Taipei Economic and Cultural Office Taiwan has donated more than 9 million medical face masks to U.S. federal and state governments since early April, with around 700,000 donated to New England alone, Yang said. In all, 44,000 masks were donated to Vermont.

“It’s an obligation to share with our friends around the world,” he told Manchester Ink Link, a Manchester, New Hampshire, online news site.