From a pair of science scholars, a powerful display of ingenuity 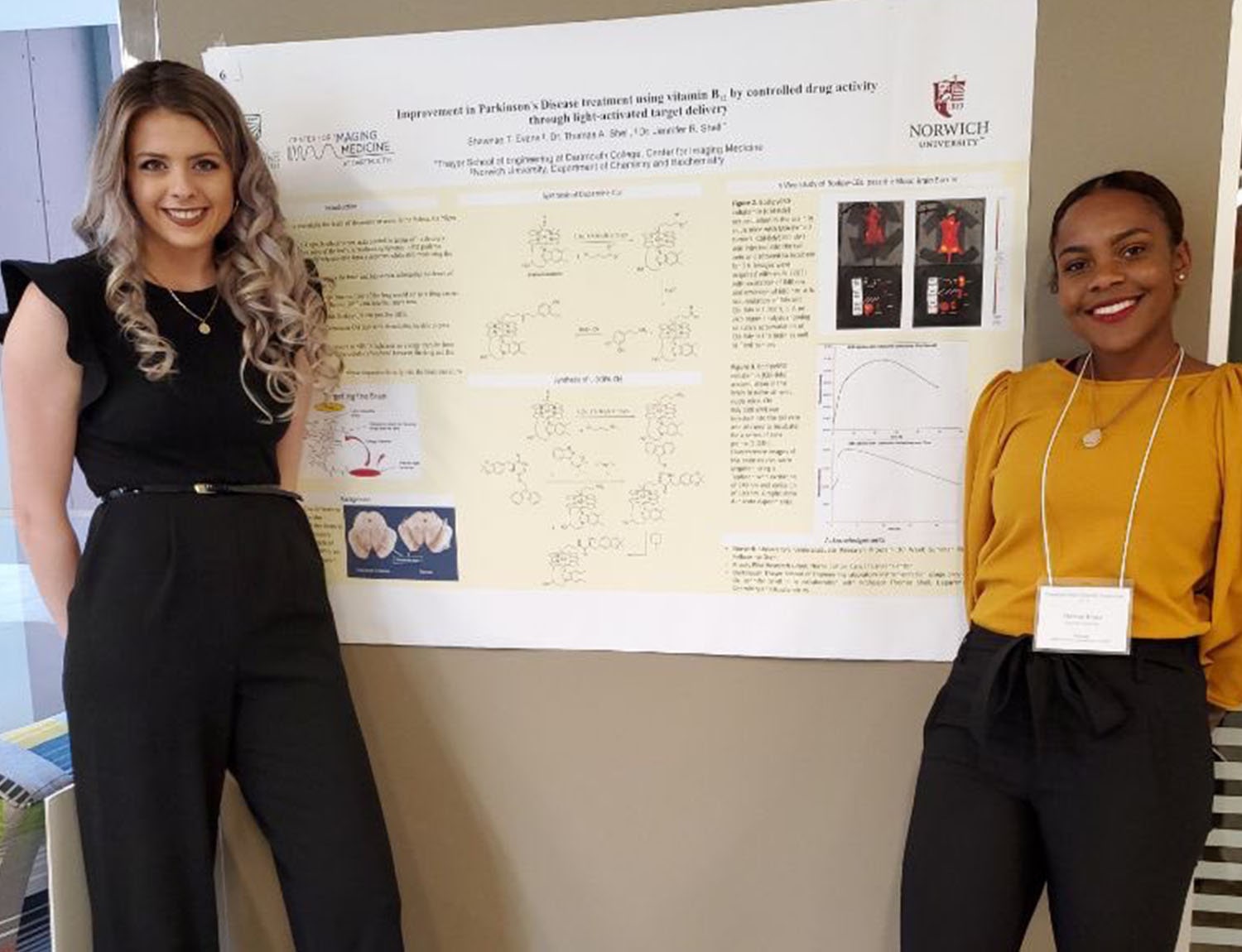 The presentation was virtual, but the thrill was real.

In April, Norwich rising seniors and science majors Shawnae Evans and Halee Lair used social media to participate in Posters on the Hill, an annual undergraduate research poster session directed by the Council on Undergraduate Research, a national nonprofit membership group that was founded in 1987 and supports undergraduate research.

Posters on the Hill would have run from April 20 through April 21 in Washington, D.C., if not for the event-scrubbing coronavirus pandemic. Ordinarily, Congress members and their staffs would attend the event to talk with the student researchers about their work.

For the second straight year, Norwich students were the lone Vermont college representatives at the event. The spot usually accommodates just one student, but Lair, a biology major and Honors Program student from Litchfield, Maine, and Evans, a neuroscience major from Fort Lauderdale, Florida, applied together and were accepted as a tandem.

Only 60 of more than 350 applications were accepted nationwide. Lair and Evans are the fourth and fifth Norwich students to gain Posters inclusion in the past six years; Class of 2020 graduate Dillon Zites, a biology major from Clarksville, Tennessee, attended the 2019 session.

Evans and Lair presented their research, “Development of Cobalamin Drug Conjugates as Trojan Horse Molecules for Drug Delivery” on a small-whiteboard-size placard, an image of which they showed on Twitter. Thomas Shell, a Norwich chemistry professor, and collaborator from Dartmouth College, Dr. Jennifer Shell, mentored the students through their work.

Evans also showed the project at the 2019 Women in STEM Summit, April 6, 2019, at Wheaton College in Norton, Massachusetts.

“We both wanted to go,” Lair said, discussing the Posters on the Hill application during a February interview. “I think we both came up with the idea to combine the poster and apply together. We were very determined, we were like, ‘We are going, we’re getting this done. We want to be there.’"

Lair, who met Evans last year in Shell’s organic chemistry class, said she was in class when Shell texted her with the news.

“I was supersurprised,” Evans said, recalling the call. “I had to hold onto the (steering) wheel really tightly because I was just ecstatic.”

Lair said the Norwich community exulted with them. Congratulatory emails rolled in from faculty.

In their research, Lair and Evans worked to reduce the harmful side effects that can result from chemotherapy drug interactions in mice. Using vitamin B12 (cobalamin) drugs to localize treatment to an area of interest, such as a tumor or brain tissue, they reasoned, would cut these side effects.

In a summary of their poster, Evans, a Corps of Cadets member, and Lair, a civilian student, wrote that their experiments showed these drugs can be delivered both to tumors and across the blood-brain barrier, something other Alzheimer’s and Parkinson’s disease-fighting treatments struggle to do.

Lair and Evans further wrote that they developed drugs linked to vitamin B12 derivatives that are not active in the body until exposed to light. (Zites’ 2019 work also explored this idea.)

When Lair and Evans showed their poster on Twitter on April 21, the Vermont Genetics Network praised it and conversed with them virtually. The network asked whether the treatments can aid ailments beyond head and neck cancer. Yes, the students wrote; the treatment can fight pancreatic and breast cancer, too, basically any cancer with an overexpression of transcobalamin receptors.

Lair said she hopes the Posters experience and her other presentations will steel her to enter medical school and work toward her goal of becoming a surgeon.

“It’s such an honor to be accepted,” Lair said.

Evans, who is contracted in the U.S. Air Force and will commission as an officer following graduation, added, “A great feeling of accomplishment. Something you work so hard for.”

Lair and Evans’ achievement lengthens a research success record at Norwich. Over the past decade, Norwich’s investment in research has grown. Through 2019, endowed income and reinvested grant overhead for research faculty and undergraduate research had topped $800,000, complementing more than $17 million of externally acquired research and institutional grants managed by the Office of Academic Research.

The Vermont Genetics Network has stoked Norwich’s research. In 2019, the network granted Shell and Norwich biology Professor Allison Neal $750,000 each for research. Norwich mathematics Professor Darlene Olsen credited the network for improving grantwriting chops she needed to land $750,000 from the National Science Foundation for science, technology, engineering and mathematics scholarships in November.

“We must cultivate student scholars by giving them opportunities to wrestle with uncertainty,” they added. “What better time than now to do this?”