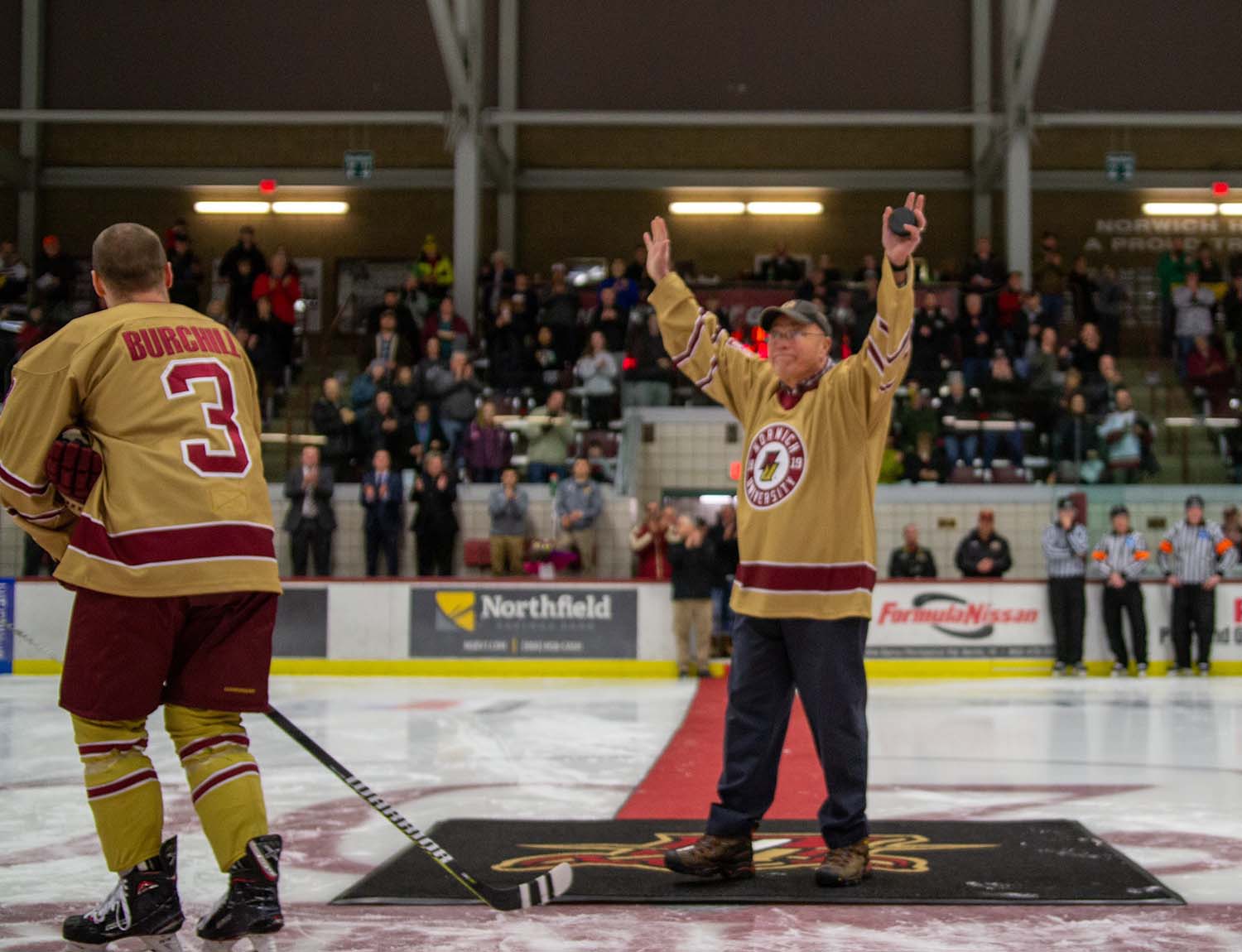 Nine individuals along with the 1969-70 football team and the 2009-10 men’s ice hockey team will be recognized as part of Norwich Homecoming Weekend festivities Oct. 1 through Oct. 4.

The inductees are as follows:

Sophie Leclerc ’10 — Leclerc is the first women’s hockey inductee in the Norwich Athletic Hall of Fame after the varsity program started in 2007. Leclerc was a cornerstone piece to building the women’s ice hockey program to a national powerhouse during her four-year playing career. She is still the program all-time assists leader with 92 assists to go along with 72 goals for 163 career points, which still ranks third on the all-time points list. Leclerc captained the 2010-11 women’s hockey team to the program’s first national championship in just its fourth year at the varsity level with a 5-2 win over the Rochester Institute of Technology. Leclerc has returned to Northfield twice after graduating, serving as an assistant coach from 2013 to 2015 and again as the head coach before the start of the 2019-20 season.

Eric Tallent ’10 — Tallent helped lead the men’s ice hockey to its third national championship in program history as a senior in 2009-10. He scored seven goals and had 13 assists for 20 points en route to earning first team All-American honors in his final season in the Maroon & Gold. Tallent served as an assistant captain during his senior season as the team compiled a 26-1-4 record and defeated St. Norbert 2-1 in double-overtime at the Herb Brooks Arena in Lake Placid, New York. to win the national championship. Tallent totaled 58 points in his collegiate career in 106 games played and was a two-time Eastern College Athletic Conference East first team All-Conference selection. He went on to play six seasons of professional hockey, primarily in the Southern Professional Hockey League.

David Held ’00 — Held was a four-year member of the rifle team, earning All-American honors as a junior and senior in small bore. Held helped lead Norwich to fourth- and fifth-place finishes at the NCAA Division I Rifle Championships in 2000 and 1999 respectively. In 1999, Norwich won the Mid-Atlantic Championships in both air rifle and small bore and won the ROTC-division National Championship. Held also served as a team captain his senior season.

Robert Ulrich ’00 — Ulrich was a four-year standout on the Norwich University wrestling team, compiling a 97-37 career record. He was a two-time New England champion as a junior and senior, including a career-best eighth-place finish in 1999 as a junior to earn All-American honors. Ulrich is a four-time All-New England honoree and is one of the most accomplished wrestlers in program history. He never finished lower than third at the New England Championship meet and posted a 25-3 record as a senior, en route to winning the 133-pound weight class.

Mike Hester ’90 — Hester is the first of two Distinguished Letterwinner inductees in this year’s Hall of Fame class. Hester co-captained the football team as a senior and was named the team defensive player of the year. He earned ECAC New England second-team honors and was an honorable mention Pizza Hut All-American. Hester went on to an accomplished nearly 30-year career in the U.S. Army after graduating from Norwich.

Chuck Allen ’80 — Allen was a rare three-sport athlete at Norwich, as a member of the skiing, lacrosse and soccer teams. He was most accomplished on the snow, though, as a four-time NCAA qualifier and earned All-East ski team honors. Allen helped lead Norwich to a second-place finish at the 1979 Division II Championship meet and a fourth-place finish in 1980. In his senior season, Allen recorded four top-three finishes in slalom and giant slalom races during the season, including winning at Johnson State.

Frank Paul DiMarco ’75 — DiMarco was a two-sport athlete as a member of the men’s lacrosse and soccer teams. He was a two-year captain of the men’s lacrosse team and helped lead the Cadets to a 6-2 record as a senior, while earning All-New England honors. DiMarco was also a three-year member of the soccer team and served as a captain during his senior season.

George Handley ’65 — Handley is the second of two Distinguished Letterwinners in this year’s class. Handley was a member of the men’s hockey and golf teams at Norwich. He took over the team’s No. 1 goalie as a senior, helping lead the Cadets to a 13-8 record and its most wins in a season since the 1951-52 season at the time. Handley went on to a distinguished military career after graduating from Norwich.

President Emeritus Richard W. Schneider, RADM, USCGR (Ret.) — Schneider is this year’s honorary inductee and he is the first Norwich University president to be inducted into the Athletic Hall of Fame. Schneider concluded his 28-year tenure as the longest-serving president in Norwich University’s 200-year history on May 31. Under Schneider’s leadership, Norwich added five new varsity sports — women’s ice hockey, lacrosse and volleyball along with men’s and women’s rugby. Norwich also won 12 national championships during Schneider’s tenure, including its first-ever in 2000 with the men’s ice hockey team. Men’s hockey has gone on to win three additional national titles, while women’s hockey has won twice and the women’s rugby program has won six.

1969-70 Football Team — The 1969-70 football team had one of the finest defensive seasons in Norwich University history en route to a 6-2 overall record. The Cadets defeated American International College, Coast Guard, St. Lawrence, Bates, Middlebury and Worcester Polytechnic Institute. Norwich broke what was then the record for most yards gained rushing in a season. The vaunted Norwich defense finished second in the country in yards allowed per game and gave up just 65 points the entire season, which ranked sixth in the country. The rushing defense ranked sixth in the country, allowing just 54.4 yards per game.

The 2020 Norwich University Hall of Fame brunch and induction ceremony will take place on at 10 a.m. Sunday, Oct. 4 in Plumley Armory as a part of Norwich Homecoming Weekend.