For a pair of new grads, a parallels universe 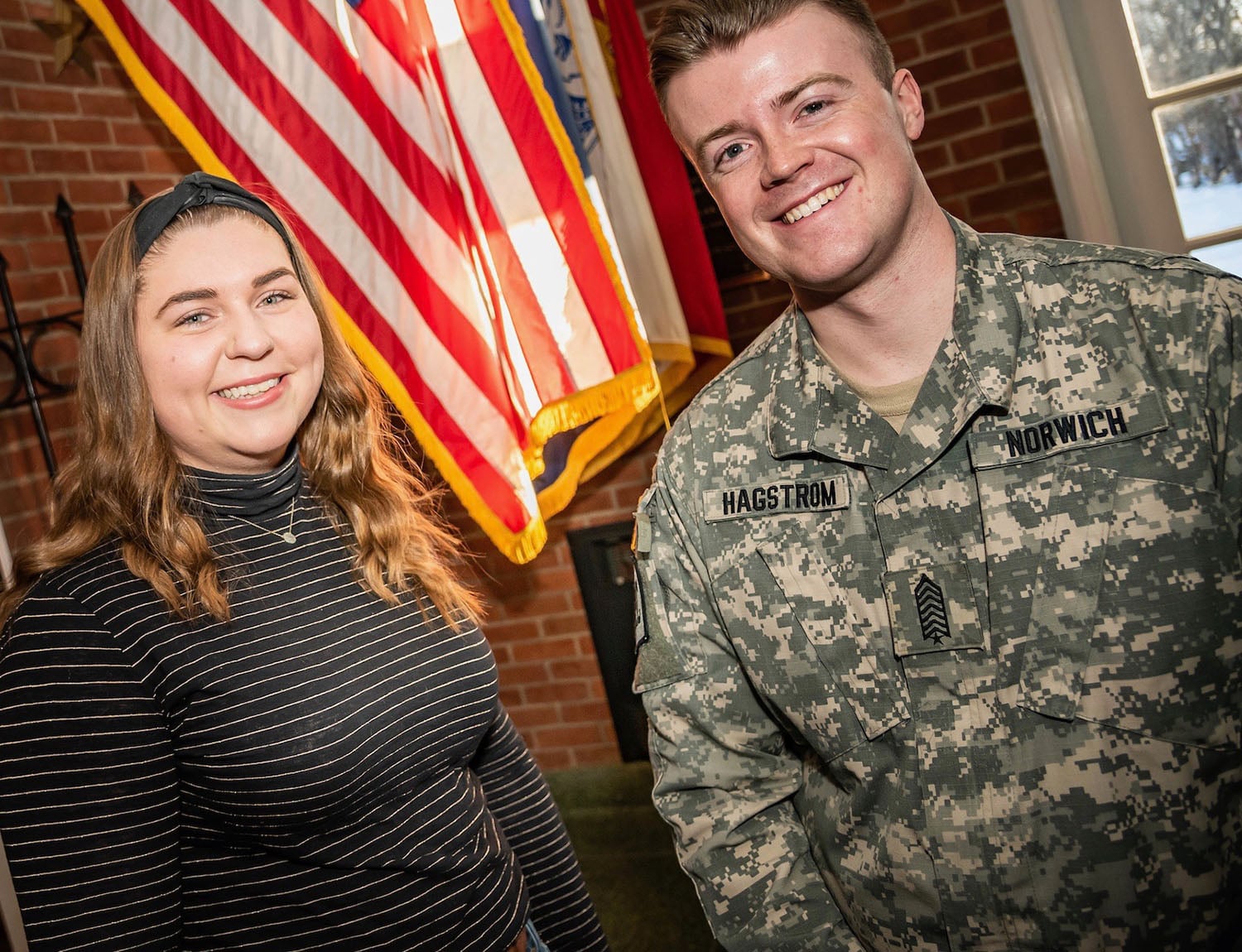 If Ethan Hagstrom and Emma Nettleship were a mathematical equation, they’d express as E2=RC2, and they’d balance beautifully.

The E’s are their matching first initials; the RCs are their Norwich leadership roles. He was regimental commander, overseeing peers in the Corps of Cadets; she was a residential coordinator, overseeing peers in residence halls. They’d balance because they’re longtime friends, having grown up in Bedford, New Hampshire, and continued a bond forged in high school.

Hagstrom and Nettleship have so much in common, they seem to inhabit parallel universes. In Bedford, New Hampshire, they were long aware of each other, having common friends, some from as far back as grade school. They learned they were attending the same college when she spotted him in a gray Norwich University T-shirt, a campus visit gift she’d also received.

“(Ethan and I) can always pick up where we left off like it was nothing.”Emma Nettleship, Class of 2020

Both have family ties — Nettleship’s parents are Norwich graduates, as is Hagstrom’s grandfather.

Nettleship and Hagstrom graduated in May. Both are engaged to be married, though not to each other. (He plans to marry in November; she plans a several-years engagement.)

They had been on track to throw their mortarboards together and deliver commencement speeches until the coronavirus crisis hit. A mid-February interview showed their closeness; they smiled at common memories and frequently finished each other’s sentences.

Nettleship and Hagstrom said their bond strengthened during their freshman year at Norwich as their new social circles intersected. He got to know her civilian peers; she met his rook siblings. Hagstrom said he and his platoon would join her and her civilian friends in the library for group study. Hagstrom and Nettleship said they also discussed their families, their relationships, their studies.

“I was glad to be someone he could lean on, because rookdom’s not easy,” she said. “I also enjoyed listening to the stories he had and learning more about the Corps and gaining that perspective.”

Hagstrom said that after rookdom, life in a civilian dorm offered a different perspective.

“There were just many funny interactions,” he said.

As their college years rolled by, Nettleship and Hagstrom grew into leadership. She continued a high school habit, having led in her high school student council and swim team; he discovered his stride in the Corps. Both shared a drive to succeed, a similar sense of humor and common ideas about life trajectories. Both said they worked to unify campus, helping Corps and civilian students mingle and connect.

As their senior year came, intensifying the pace of everything, their interactions diminished. Nevertheless, Hagstrom said he cherished any meetings, however fleeting. Nettleship said they’d always catch up quickly.

“We can always pick up where we left off like it was nothing,” she said.

Hagstrom added, “It’s not like you get back into small, surface-level talk. It’s right back into how you’re actually doing … which is always really nice.”

Postgraduate life may separate Hagstrom, a communications major and Nettleship, a cybersecurity major. Nettleship’s fiancé is in the U.S. Navy and she’s weighing staying in New England for a while, near her family, or going at once to her fiancé’s current station in San Diego, or his next one, in Charleston, South Carolina. Hagstrom said he’s pursuing a U.S. Coast Guard commission, with freshly retired Norwich President Richard W. Schneider’s support. But Hagstrom said the soonest a commission would send him away is December; he’ll stay, and work, in New England in the interim.

Shortly before May 2’s virtual commencement, Nettleship said, although she and Hagstrom couldn’t wave goodbye to each other, they’d connect. A less-than-10-minute car ride would put them in the same space, where they can say hello from 6 feet apart.

“We are hoping to catch up by going for a ‘(physical) distancing’ walk sometime soon as well,” she wrote in an email. “Ethan and I are also on the Senior Class Gift Committee together and are working on that to help give back to Norwich with some of our peers. I think the ‘big commemorative event’ for us will still be graduation in September. It will give all of us seniors something to look forward to.”

There’ll be other chances to reunite, virtually, through Instagram and Snapchat, text messages, old-fashioned phone calls, or in person, perhaps eventually at the Inside Scoop, a beloved Bedford ice cream shop, on campus at Homecoming or elsewhere.

“If I’m on the West Coast, and he’s still in New England and he comes out to the West Coast, he’ll give me a call,” she said. “We’ll get coffee, grab a drink, whatever.”