With a commission, an important commitment 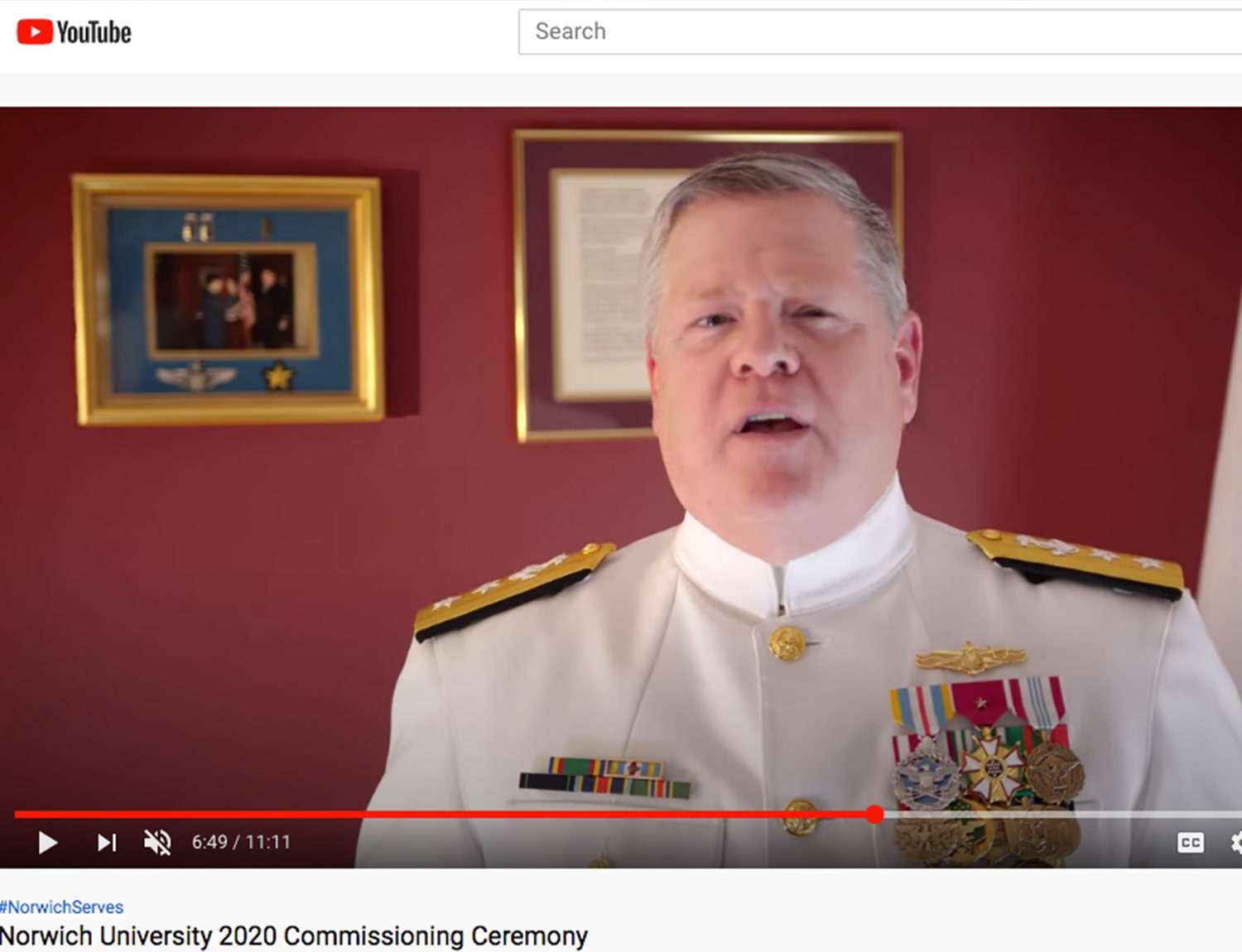 With 74 life-transforming words Sunday, a collection of Norwich University seniors will join a special 1% group and achieve a profoundly proud moment, alumnus and U.S. Navy Rear Adm. Daniel J. MacDonnell said. Although the coronavirus pandemic has separated them geographically, MacDonnell, 2020’s commissioning guest speaker, said the words, in their commissioning oaths, will unite the students powerfully, in spirit and in service.

Wolf said each branch will hold virtual ceremonies to mark the moment. He added that commissioning is special wherever, or however, it happens because of the commitment to country officers-to-be accept. They promise to defend America against all enemies, foreign or domestic.

“You will be leading men and women, the nation’s treasure, our sons and daughters and our grandkids, to defend our liberties,” he said. “All of us support you. We cheer you. We thank you for being willing to take up arms to defend us.” Richard W. Schneider, Norwich University president

“Virtual commissioning is not ideal, but it is indicative of the need to remain positive, adapt to changing circumstances, and achieve your goals regardless of challenges,” Wolf wrote in an email. “Their careers will be full of such moments: moments which are not how they wished they would be, but which they can still benefit from and remember proudly based on what they have accomplished and how they carried themselves despite the difficulties.

“I am proud to be associated with young men and women like these because they are willing to sacrifice for our nation,” Wolf added, “and because of all they have accomplished and will accomplish in the future.”

Because the traditional in-person ceremony wasn’t possible, MacDonnell, a 1985 Norwich graduate, and university President Richard W. Schneider created a virtual ceremony on video. They hailed the commissioning students’ moment and praised them for their promise to defend the Constitution and with it, America’s freedoms.

Schneider, dressed in a white U.S. Coast Guard dress uniform festooned with medals, spoke from Norwich University’s Medal of Honor Gallery. He lamented that he couldn’t see the soon-to-be officers and give them their specially minted Class of 2020 commissioning coins. Then, Schneider told the commissionees they will take many oaths in life, but this was one of the two most important (the marriage vow is the other).

“You will be leading men and women, the nation’s treasure, our sons and daughters and our grandkids, to defend our liberties,” he said. “All of us support you. We cheer you. We thank you for being willing to take up arms to defend us.”

MacDonnell, also dressed in white, in his medal-adorned Navy uniform, spoke from his home office in Wrentham, Massachusetts. He thanked Schneider, who is retiring, for his long leadership of the university. Then MacDonnell had the camera pan to pictures of his Norwich graduation, his commissioning and then to his ensign’s shoulder boards, sturdy if slightly tarnished after 33 years.

The brief oath the students will take will usher them into the 1% of Americans who defend freedoms for the other 99%, he said. The commissioning oath’s constitutional ties make it unique, MacDonnell said, linking it to the Founding Fathers, the republic’s origins and the liberties promised to America’s people. The oath is the same for all branches, he said, and will be said again each time commissionees gain rank.

MacDonnell encouraged commissionees to use, and sharpen, all the leadership skills gathered at Norwich and to expect the unexpected. MacDonnell said he could never have imagined serving boots-on-ground for a NATO commander in Afghanistan or working at the National Security Agency for a four-star Army general. He said he also could never have fathomed technology’s leaps from his relatively analog world to the digital one full of email, cellphones and the internet.

MacDonnell promised the commissionees a great adventure; quoting President John F. Kennedy, he said the torch has been passed to a new generation of Americans, and they’re that generation. In a telephone interview, MacDonnell said he’d remind the young officers, and his younger self if he could, to take their duties seriously, but enjoy the ride.

“Stop, take a deep breath, embrace where you are, and go do something,” MacDonnell said. “Once you leave that assignment, to leave that location, you may never go back to it again. Take a pause, take it all in.”

Wolf said he felt lucky to work with the commissioning seniors and other students, who, he said, always strive for excellence and handle adversity with grace and humor. For the young officers, Wolf said, commissioning marks the end of a long journey and the start of another.

“Whether you stay in (the armed forces) for five years or 35, my advice to you is not to judge your success based on what ends up on your chest or on your collar. Rather, measure yourself by the successes of the people you are fortunate enough to lead,” he said. “So long as you take care of them, they will not let you down, and our nation will be in good hands.

“Your families, your friends, and the staff and faculty at Norwich have all spent countless hours helping to prepare you for what’s next, and now, it is your challenge to face,” Wolf added. “I know that you are ready.”

To view these videos, and other messages to our graduating class, please visit :