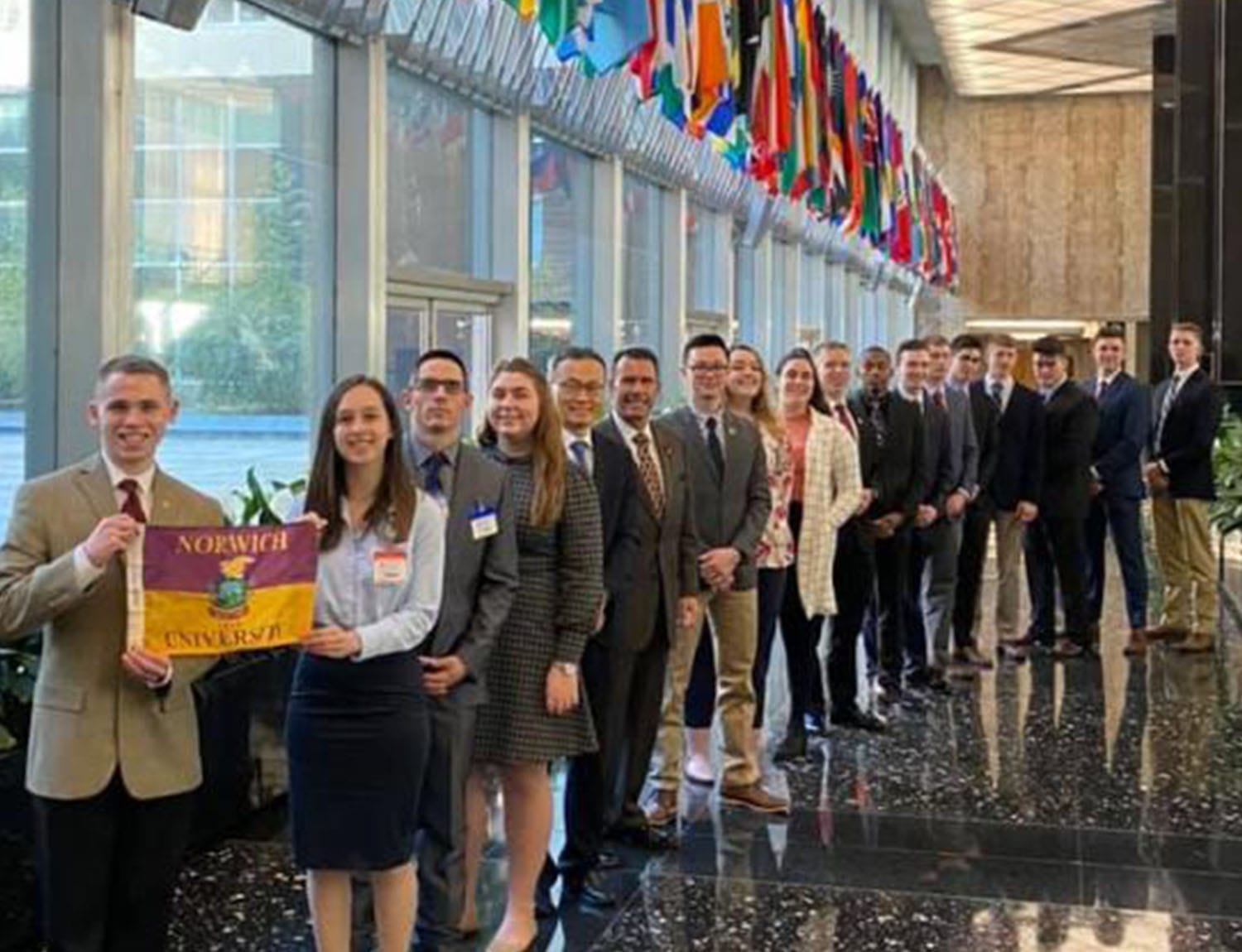 Norwich University’s political science students got an up-close look at the inner workings of federal agencies during the recent Policy Week tour of Washington, D.C., from March through March 13.

Norwich University Alumni and Board of Fellows members, Jayson A. Altieri, a retired U.S. Army colonel who is now a professor at the Air War College, Maxwell Air Force Base, Alabama, and Mary Bati, U.S. State Department, Washington, D.C., served as coordinators and mentors for the experiential learning week.

The Policy Week students and faculty began the first two days by visiting the U.S. State Department and meeting ambassadors, desk officers and foreign policy experts who discussed the challenges and successes of U.S. policies in Afghanistan, China, Iraq, North Korea, Russia and Turkey. The students also met with the Diplomatic Security Service, a State Department subsection responsible for the security of all U.S. foreign service personnel and facilities worldwide.

“Having the opportunity to visit the TSC was terrific, especially considering that the focus of my studies is terrorism and organized crime.” Aleia Manning, Norwich University senior

Day three let students meet with members of the FBI’s Terrorist Screening Center.  In an “In Their Words” blog, graduating senior Aleia Manning wrote, “The highlight of our time in D.C. was probably the Terrorist Screening Center (TSC), in which they had artifacts from notorious acts of terror that were incredibly symbolic. They also told us about how their operations center functions, as well as the watchlist that they maintain.

“Having the opportunity to visit the TSC was terrific, especially considering that the focus of my studies is terrorism and organized crime,” she added. “We also ended the week with a simulation of the National Security Council, in which my team successfully thwarted a bioterror attack through interagency cooperation and teamwork.”

On day four, the Policy Week team received briefings from Gen. (Ret.) Carter Ham and retired Army Sgt. Maj. Daniel Dailey at the Association of the U.S. Army in Arlington, Virginia. Ham and Dailey briefed the students and faculty on the national strategic land power challenges the U.S. Army faces in the 21st century and the role the Army plays in addressing them.

Later that evening, the students attended the NU Alumni-Student Social at the Crystal City Sports Pub in Arlington, Virginia. This was an opportunity for the Policy Week and criminal justice students (who were also on a weeklong learning excursion in D.C.) to meet and network with Norwich alumni who work in the nation’s capital.

The weekend ended with a strategic simulation exercise that had the students split into two teams and receive a series of national security policy scenarios involving WMDs, national disasters and a national election season. Based on these scenarios, the students used earlier policy discussions and implemented the interagency process to meet U.S. national security objectives. Linda Mills, a Marymount University professor and a former senior executive at the Office of the Director of National Intelligence, served as the U.S. vice president in this exercise and took students’ briefings.

“The 2020 Policy Week started by Dr. Ku mirrors similar programs used at the U.S. Army and National War Colleges,” Altieri said. “The level of interaction Norwich students experience during the week, combined with the strategic simulation exercise gives those majoring in criminal justice, economics, and political science a better understanding of the national security challenges faced by our civilian and military leadership in a volatile, uncertain, complex, and ambiguous 21st century global economic, political, and security world.”

“Even further than being briefed on operations and policies from several agencies, it was fun to be able to explore Washington D.C.,” she wrote. “I was really excited to go back and visit some of my favorite restaurants and hang out with amazing people.

“The U.S. Security Policy class goes on this trip every year,” she added, “so if any of this sounds exciting to you, I would keep an eye out for information on the course next spring!”