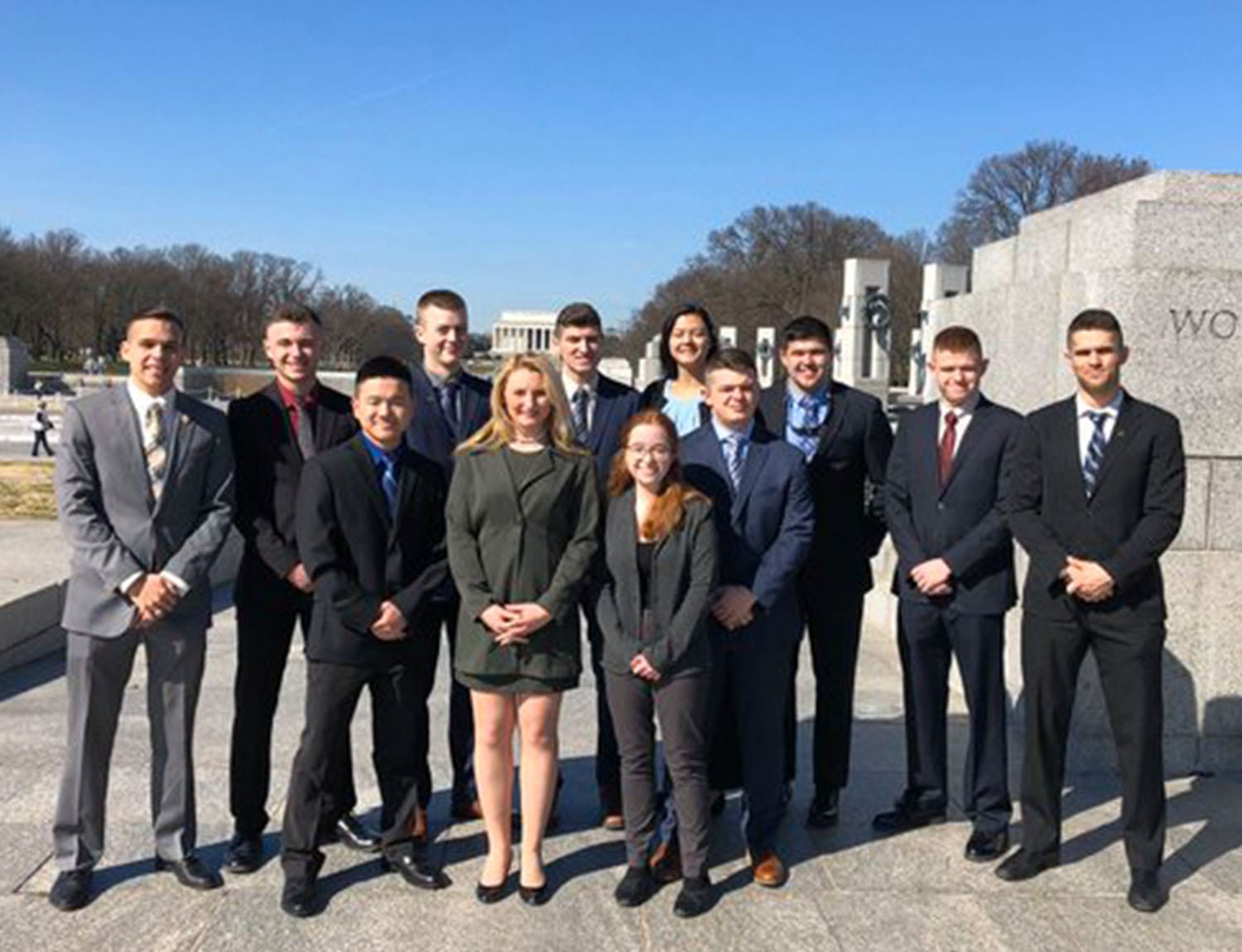 “It’s good to put students in situations in which they might be uncomfortable, they lack experience in, but they will discover themselves in that process; they will discover what they’re very good at and what they need to improve upon.”David Sem, criminal justice Washington, D.C., trip coordinator

The group will also connect with Norwich alumni at Norwich Connects gatherings in Arlington, Virginia, and Annapolis, Maryland.

Sem said alumni, particularly Meghan Kennedy ’12, a member of Norwich’s Board of Fellows and a supervisor in U.S. Customs and Border Patrol, helped arrange the itinerary. Fundraising by the Criminal Justice Students Association (partly through movie nights) and money from the Campus Activities Board, the School of Justice Studies and Sociology and the J.P. Morgan Chase Foundation (landed via the provost’s office) enabled the trip.

By visiting Washington, Sem said, students will get off campus, meet important officials and, following Norwich’s traditions, learn from experience. The group will hear how top federal agencies are developing policy to fight the opioid crisis and methods to halt human trafficking.

“You can’t teach what they’re going to learn (in Washington), you just can’t teach that in a classroom,” he said. “You can teach concepts in leadership, you can teach strategies but you really don’t know the type of leader you’re going to become, or you are, until you’re in a situation in which you actually have to deploy those tactics.

“It’s good to put students in situations in which they might be uncomfortable, they lack experience in,” Sem added, “but they will discover themselves in that process; they will discover what they’re very good at and what they need to improve upon.”

Sem said he hopes the students will see the alumni, who also went through rookdom and on-campus parades and dining hall meals and say, “This is what I can be.”

Caylen De Los Reyes, a senior criminal justice major and Corps of Cadets member, went on last year’s criminal justice trip to Washington to tour the Pentagon and meet with its officials. He said this year’s trip will have equally excellent opportunities to network and learn in places most people never see.

“It’s interesting to get the point-of-contact side of the story with regard to what (officials) do for work because there’s always an aspect of their job that we aren’t privy to,” said De Los Reyes, a U.S. Army enlistee interested in combating transnational crime. “There’s always a tendency to take the more Hollywood-esque version and use that as the entirety of what they think.”

Kenneth Powers, a senior criminal justice major and cadet, said he’ll be excited to take the trip, an opportunity he’s craved since his freshman year, and visit the White House, a place he’s seen only through gates. He said he’s also especially interested in exploring the Secret Service, an agency he might like to join after graduating and serving in the U.S. Army’s Signal Corps.

“I hope to learn something where maybe I can take my Army job and switch it right over into a government-type job with the experience that I get,” Powers said.

Rebecca Finley, a junior psychology and criminal justice major and cadet, said she’s expanding her D.C. story, building on the past — she went on last year’s criminal justice trip — and preparing for the future — she’ll intern with Customs and Border Protection’s Intelligence Office in the fall.

“This trip will really get me to jump into networking and communicating,” said Finley, who plans to commission into the U.S. Army. “I want to specialize in human intelligence, so it’s really important to be able to communicate with … different personalities, different types of people … who have a lot of different experiences.”

Finley added that the group’s members will feed off collective experience; big city savvy students might help novices get their bearings. Sem said he hopes the trip will get students thinking — about topics to research, passions to pursue or paths to follow.

“They may become trendsetters, or people who write policy,” Sem said. “They might affect how we govern, how we’re governed, and they’ll look back and say, ‘This was first introduced to me when I was on a trip to D.C.’”