Fill your plate, broaden your perspectives 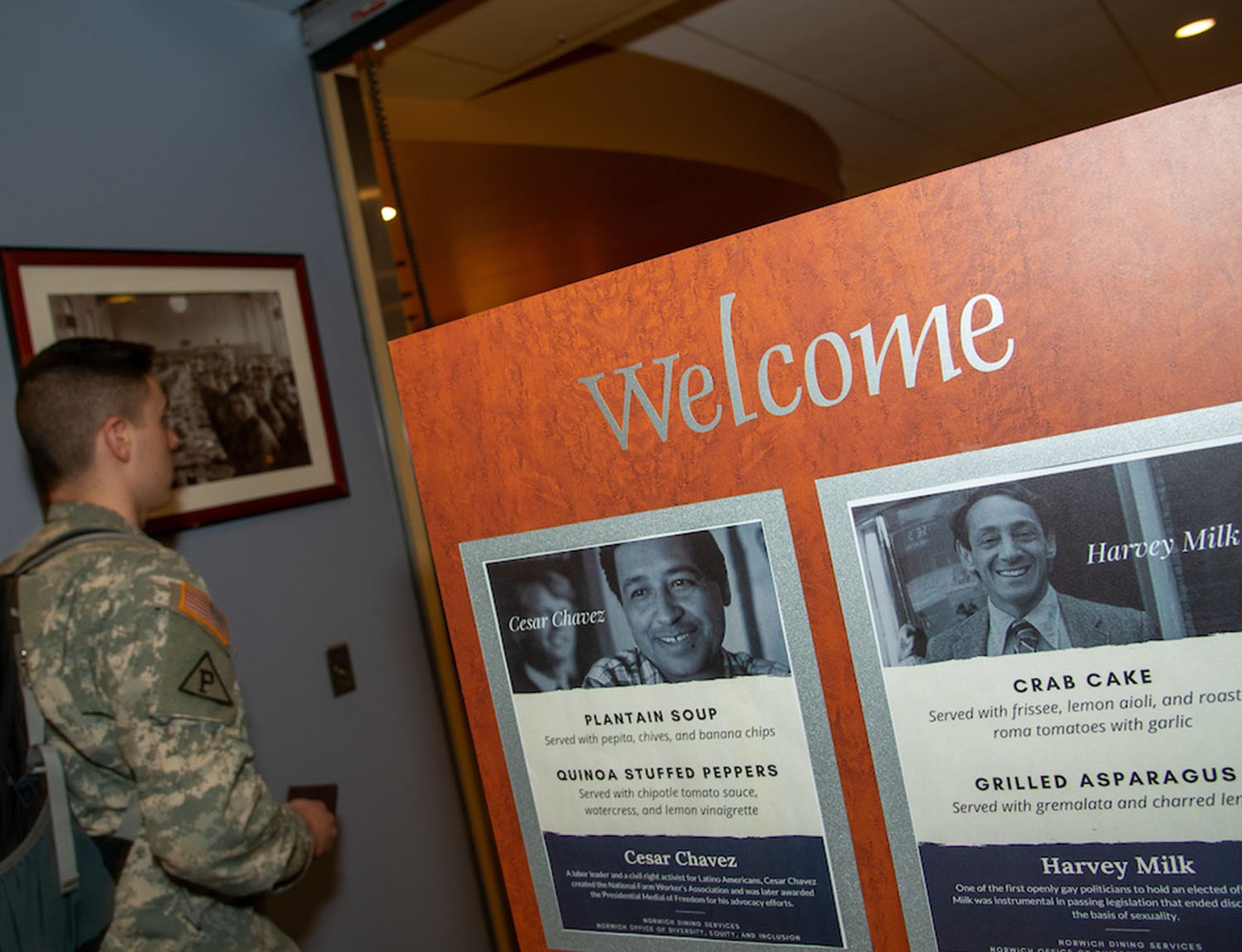 You know the good cop-bad cop trope from television police procedurals: A witness (or suspect) enters a room, meets two police officers and faces two questioning styles — one aggressive (the bad cop), one friendlier (the good cop). Whatever the questioning style, the interviews are usually fraught and impatient; the denouement must fit neatly into 44 minutes for an hourlong episode and commercial breaks are always looming.

But on a cold February morning, as clouds of snowflakes swirled furiously outside Ainsworth Hall, Vermont State Police detectives conducted interview simulations with preternatural calm. A pair of students recounted a real-life incident — a car wreck for one, teenage tomfoolery for another — to detectives Tylor Rancourt, a Norwich 2010 graduate, and Dan Burrows.

From a second-floor classroom through a closed-circuit television link, a collection of police personnel ringed a large conference table and watched the questioning, which took place in a sparely furnished first-floor classroom.

“Instead of like it is on TV, all ‘good cop-bad cop,’ the questioning like the one I just watched was very calming, very human.”Josh Skelley ’23, criminal justice major

Detective Sgt. Daniel Trottier of the Vermont State Police’s Middlesex Barracks helped organize the exercises, helped by Aimee Vieira, the School of Justice Studies and Sociology’s interim director. In an email, Vieira said the trainings have been conducted for more than a year. Volunteer interviewees have come from Norwich courses Criminal Justice 308, The Police and Criminal Justice 101, although sociology and theater students and some College of Liberal Arts faculty have also participated, she said.

The detectives used the PEACE model of interviewing, which holds that interview subjects are likelier to cooperate with calmer, less confrontational interviewers.

Law enforcement officials and psychologists in England and Wales developed PEACE in the early 1990s to stem mounting false confessions linked to confrontational interviewing. (PEACE stands for preparation and planning; engage and explain; account; clarify and challenge; closure and evaluation.)

The late-February students were in a two-week interview simulation module, Trottier said. In the first week, students played witnesses and victims, answering questions on a life moment they’d chosen. In the second week, students played suspects; they’re assigned a crime and a defense to explain it away.

“We don’t want to run through having the same person interviewed 500 times,” Trottier said. “We want … new people coming in who have never gone through the interview experience. We bring (the interviewees) upstairs and ask them how it went and they give fresh perspective. It’s good for the students and it’s good for us.”

By asking open-ended questions and letting interviewees talk, the troopers could get cooperation and avoid unduly influencing answers, Trottier said. Someone asked whether he likes coffee or tea, for example, might feel compelled to pick one. It’d be better, Trottier suggested, to ask whether someone has a favorite beverage.

The exercise acknowledges how questions can shape what people remember, Trottier said. He said a sexual assault victim he’d interviewed had long questioned what happened to her because her mother had once asked, “Are you sure this is the person you think did this?”

Tell me what you remember

In the first Ainsworth interview, Burrows, backed by Rancourt, was talking to Norwich freshman Josh Skelley. Burrows told Skelley he wouldn’t rush anything and asked him for all the detail he could remember about a viewed-in-passing freeway collision of a sportscar and an SUV.

After Skelley said the SUV, hit from behind, had spun out, hit a guardrail and sustained rear-end damage, Burrows asked him to close his eyes and remember more. What had he heard? What had he smelled? Who had he been with in the car?

Skelley said he’d been on Interstate 90 with his father, who was driving. Traffic had been light. The SUV had been a red Honda; the sports car had been a black Ford Mustang. At Rancourt’s further gentle prompting, Skelley remembered it had been late October; the leaves were changing color.

In a postinterview debriefing, Skelley said the troopers had made him feel thoroughly heard — they seemed to take notes on every detail shared — and calm — their laid-back demeanor slowed his pulse.

“Everything they did made me feel like a real person,” Skelley said. “They didn’t come in hard or anything like that, they came in soft and quiet, if that makes sense.”

In the second interview, another freshman criminal justice major, Sulaiman Jalloh took questions from Rancourt, backed by Burrows. Jalloh described a day from his freshman year of high school in which someone in his group of friends had taken a grocery store shopping cart and hit a car with it. Jalloh recalled how on surveillance video, police had noticed his high school’s logo on a bookbag and then called Jalloh and his friends individually for interviews afterward.

In the debrief, Jalloh said the officers jogged his memory by asking questions he hadn’t considered and that closing his eyes had helped him visualize further. Like Skelley, Jalloh said the troopers made him feel heard with their notetaking and oral recaps. Jalloh added that the trooper in the exercise had made him feel more comfortable than the police officer in the long-ago shopping cart incident.

Skelley, who said he hopes to someday join the police, perhaps as a state trooper, said the exercise satisfied lingering curiosity.

“I wanted to learn what it’s like to have a real talk with real people,” he said. “Instead of like it is on TV, all ‘good cop-bad cop,’ the questioning like the one I just watched was very calming, very human.”

Jalloh, like Skelley, called the exercise unexpectedly tranquil, nothing like the noisy battle for domination he knew from television.

“This taught me that there’s more than one way to get what you need out of people,” he said. “There are different ways you can approach situations.”

Rancourt, who was a Burlington police officer before joining the state police in 2014, said Norwich professors had prepared him well for his career, broadening his thinking and showing him the theory underpinning criminal justice’s practice. He said he was glad to be back on campus, helping students benefit from his experience and reminding them that their current lessons will have long-lasting value.

“I don’t think I have any perfect pearls of wisdom,” Rancourt said. “But, really, (the message is) take your education and adapt it to your career and use it the best way you possibly can. And return back some of wisdom if you can.”