You make a compelling argument 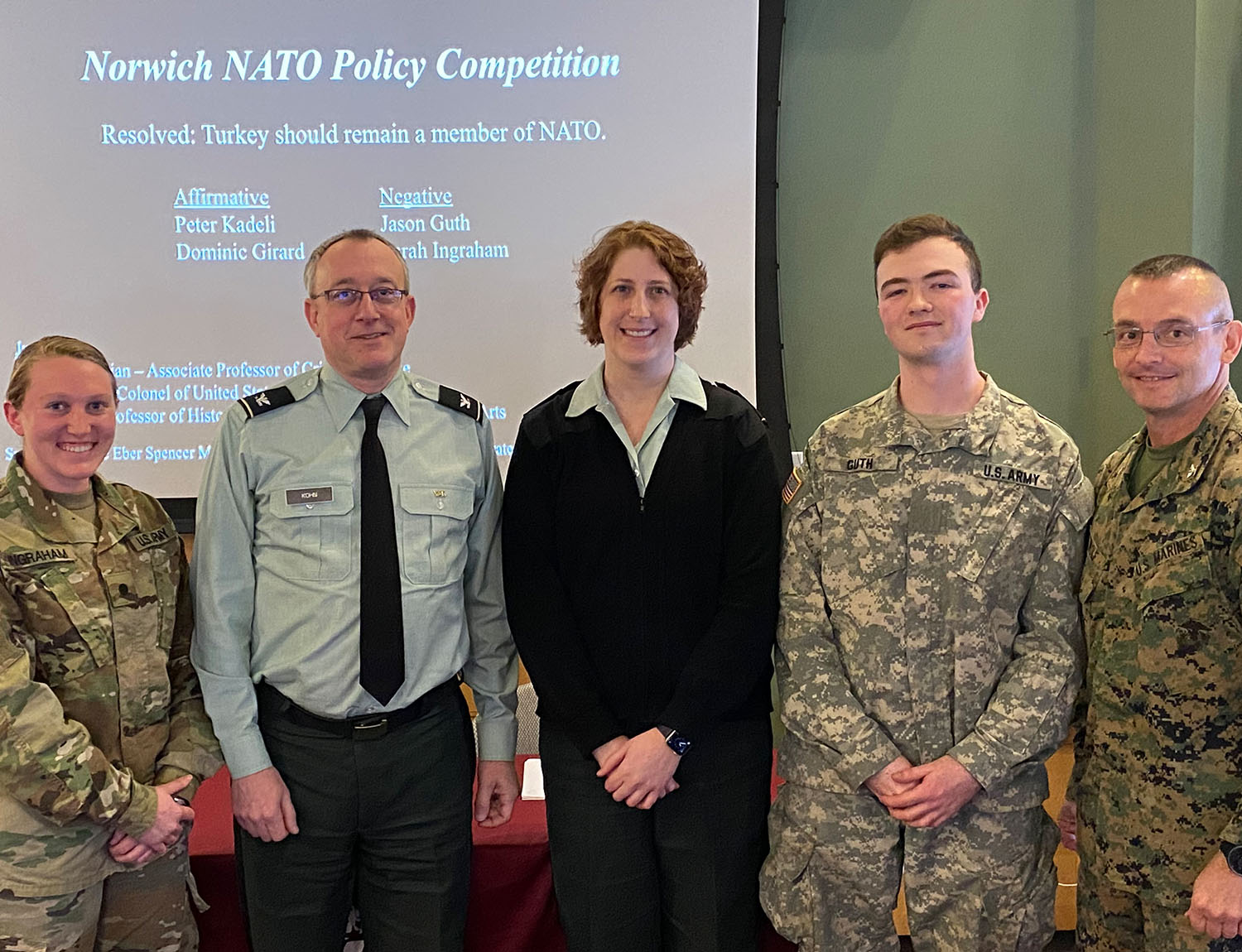 Resolved: Turkey should remain a member of NATO.

This pressing question with strategic implications for the United States and the North Atlantic Treaty Organization was discussed and debated Feb. 3 and Feb. 4 during Norwich University’s first NATO Policy Competition. Six two-student teams reached the elimination round and presented arguments to a panel of expert judges to address this resolution.

During the elimination round, held in the afternoon Feb. 3 in the Dean’s Conference Room in Dewey Hall, each presentation lasted about 25 minutes; the student teams had 10 minutes for presentation, 10 minutes for questions from the judges and five minutes for debriefing. Expectations for the elimination round were high; only one team from each side of the argument would advance to the final round the following afternoon in Kreitzberg Library’s Todd Multipurpose Room.

Dr. Alexis Vahlas and Pierre Le Goff served as the elimination round judges. Both are experts in the European Union and NATO and are serving as political advisers for the French government in Gaza, West Bank. Their academic and practical experience gives a unique lens to examine issues from a large, strategic perspective while also keeping an eye to functional approaches. Their questions were rigorous and students were challenged to defend their positions and examine the topic from alternative perspectives.

Final-round presentations lasted 20 minutes — 10 for the presentation and 10 for judges’ questions. Judges deliberated for about five minutes after hearing both presentations. The entire final round lasted about an hour.

During the final round, Dominic Girard (studies in war and peace) and Peter Kadeli (criminal justice) argued that Turkey should remain in NATO. After a rigorous round of questioning by the judges, Sarah Ingraham (international studies and political science) and Jason Guth (international studies) argued that Turkey should put on provisional status before full removal.

After deliberations, the panel named Ingraham and Guth the competition’s winners, based on research quality, examples, proposal creativity and ability to field questions. Students celebrated their victory over dinner at Cornerstone Pub in downtown Northfield with Dr. Michael Thunberg, a political science professor and the competition’s coordinator.

Here are student reflections on the experience.

Dominic Girard, ’22, studies in war and peace — Alexis Vahlas and Pierre Le Goff were a pleasure to meet. As judges, they showed their expert knowledge of the subject and were very critical thinkers; they offered great critical analysis and advice on how our arguments could be improved. The competition itself was an opportunity to conduct research and experience presenting it rationally and convincingly. I enjoyed the chance to compete.

Aubri Strachan ’23, political science  – Competing in the first-ever NATO Policy Competition at Norwich gave me an opportunity to interact with international scholars on a personal level and discuss real-world problems. The opportunity to interact with other students and the guests on campus about something that is of interest to us all that separates Norwich from any other university or Political Science program.

Aleia Manning, ’20, criminal justice – I really enjoyed visiting with Alexis Vahlas and Pierre Le Goff while they were at Norwich, both inside the classroom and through the NATO Policy Competition. It was extremely interesting to hear about the Israeli-Palestinian conflict from the perspective of the different international coalitions they have both worked with.

READ MORE STORIES FROM THE COLLEGE OF LIBERAL ARTS: