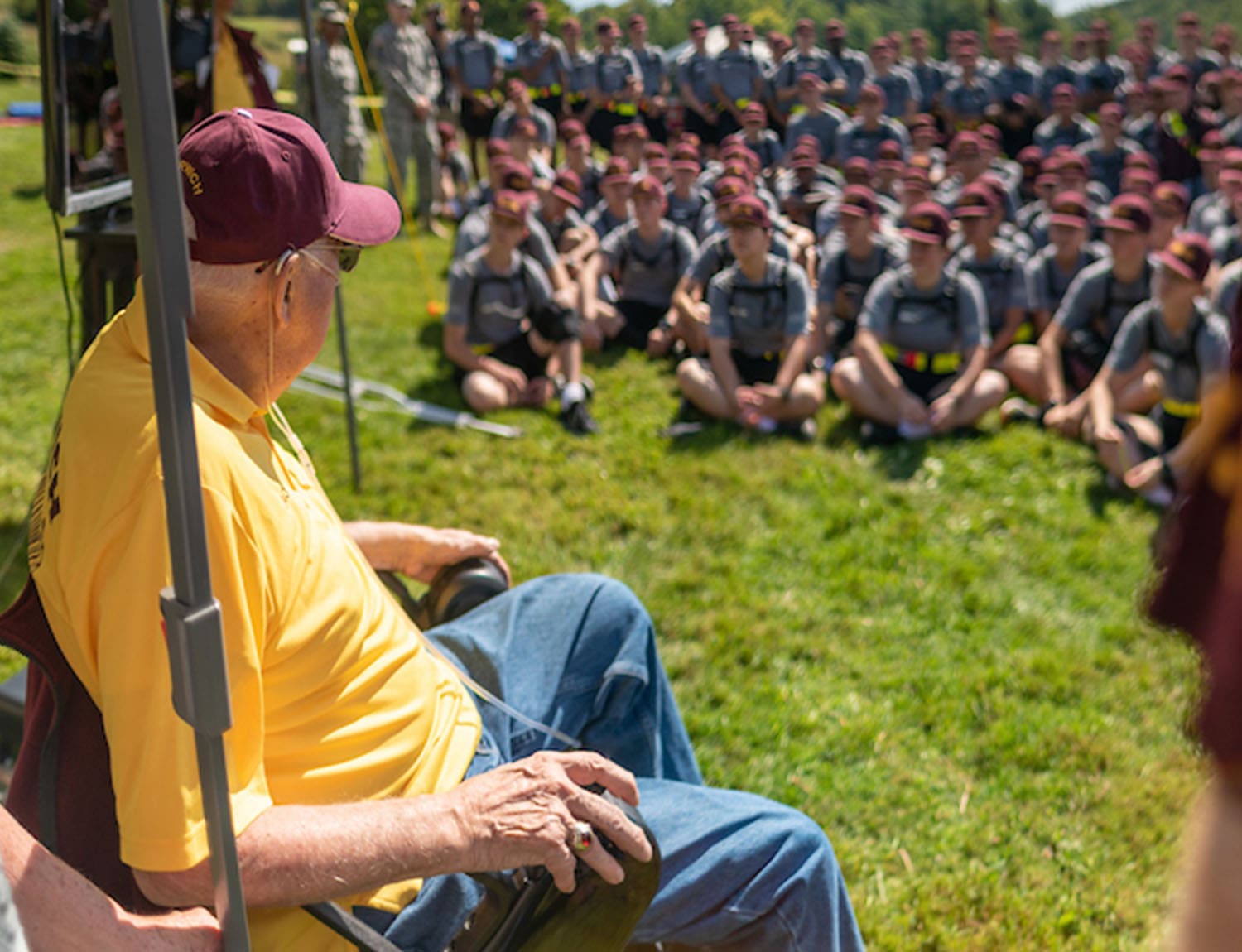 James C. “Jack” Abare, a Norwich Class of 1957 alumnus and decadeslong Norwich advocate whose fall cookouts became a cherished rite of passage for rooks in the Corps of Cadets, died Saturday at age 86.

Abare earned a Bachelor of Science in business at Norwich and was chapter historian of Sigma Phi Epsilon and a member of the drill team and Newman Club. He was father to David Abare ’87, cousin to Ronald Celentano ’83, and uncle to Joseph Wright ’96.

After graduating from Norwich, Abare entered the U.S. Army as a 2nd lieutenant and went to the Armor School at Fort Knox in Kentucky. He later served nine years in the U.S. Army Reserve. Along the way, Jack married Lona St. Cyr, his high school sweetheart; they lived for most of their married life in Boxford, Massachusetts. Jack later lived in Salem, New Hampshire.

“Jack has a binding interest in Norwich. He had all the freshmen up to his house, they became known to each other and if you think how many of them there were, it was a very, very fine thing to have happen.” Maj. Gen. W. Russell Todd ’50, Norwich University president emeritus

Abare has a long record of service to Norwich. He spent time on the Board of Trustees, the Board of Fellows and the board of directors for the Norwich Alumni Association and the Partridge Society. He was also a member of the Friends of the Kreitzberg Library and among 30 plus Norwich men in the Ancient and Honorable Artillery Company of Massachusetts.

Abare was also a Partridge Society Five-Star General and a Garrison Associates Founding Member with over 35 years of consecutive giving to Norwich. For his many contributions to Norwich, Abare received the Board of Fellows Medallion in 1994, the Norwich University Alumni Association Distinguished Alumnus Award in 1981.

The Abare Dining Hall at Wise Campus Center is named for him. And, this past fall, Abare was one of 78 people honored with a step on the new Bicentennial Stairs off the Upper Parade Ground.

For 34 years, Abare, who in his career was CEO of Plastic Distributors & Fabricators Inc., hosted the fall semester cookouts, dubbed Rook Dining Out, with his wife, Lona. (Lona, who was married to Jack for 61 years, died in 2017).

The Rook Dining Out picnics were festive affairs, featuring skeet shooting, tugs-of-war, volleyball games, music and a Norwich banner-carrying skydiver. In a January 2019 NUTV video commissioned by Norwich’s Department of English and Communications, Abare took a microphone and addressed a Rook Dining Out gathering.

“Good morning freshmen,” Abare said in the video, made to honor his 85th birthday.

Abare said, “I want to tell everybody to enjoy themselves.”

At last fall’s Rook Dining Out, Abare recounted the event’s origin story. He said he purchased the farm in the 1980s, when one of his four sons was at Norwich, and started the cookout after hearing that some rooks were unhappy and considering quitting the Corps and leaving school.

At the Norwich president’s behest, Abare invited about 10 or 15 rooks to the farm for a cookout.

Abare said he liked making the rooks happy; getting into the Corps is taxing and its newest members merit a rest. He added that he was glad to encourage students to stay at Norwich and learn life lessons, like the need to take orders, in a spirit of camaraderie and friendship.

“The Abare picnic … allowed us to truly relax together, with our platoons, and as a rook class,” Adele Cousland ’22 wrote in an “In Their Words” student blog in September. “And, of course, at the end of the day we had to go back to our cadre and march back to school, but in all honesty, even that part of the day was fun, because we were all together.”

A dining hall with his name

In the Jack Abare Rook Dining Hall, pictures of rooks with their platoons, often taken at Rooks Dining Out picnics, line the walls.

In the aforementioned tribute video honoring Abare’s 85th birthday, Norwich President Richard W. Schneider said these pictures are often the first time the platoons are photographed together. The images stay on the Abare Dining Hall’s wall during the students’ full university stays, he said.

“This is where the bonding happens,” Schneider said referring to the Abare Dining Hall. “This is where we start to grab their heart and soul, right here, on this deck, with their cadre members, teaching them what it means to be men and women at Norwich.

“And, Jack,” Schneider said, looking into the camera, “you are one of my shining examples of what it means to be a Norwich man.”

“Jack has a binding interest in Norwich,” Todd said. “He had all the freshmen up to his house, they became known to each other and if you think how many of them there were, it was a very, very fine thing to have happen.”

Besides the fall cookout, Abare hosted the annual Abare Excellence Dinner, inviting any rook who achieved a grade point average of 3.0 or higher for the fall semester.

And, in 1983, Abare and Mike Frangos ’52 started the North Shore Scholarship, to help students from Massachusetts’ North Shore, particularly Essex County, attend Norwich. (Abare graduated from Lynn High School in Lynn, Massachusetts, in 1953.) The scholarship is open to all class years. He also started the Abare Family Scholarship, which has helped several students every year.

“The key thing I always told the students,” Vanecek said, “is that Jack is a simple guy. These are things you, the rooks, can do, and you can be great like Jack.”

POSTSCRIPT: Buglers from the Corps of Cadets played echo taps in Jack Abare’s honor the night of March 6, 2020. Sideshow photos from Mark Collier are below.