Now we’re talking, all around the world 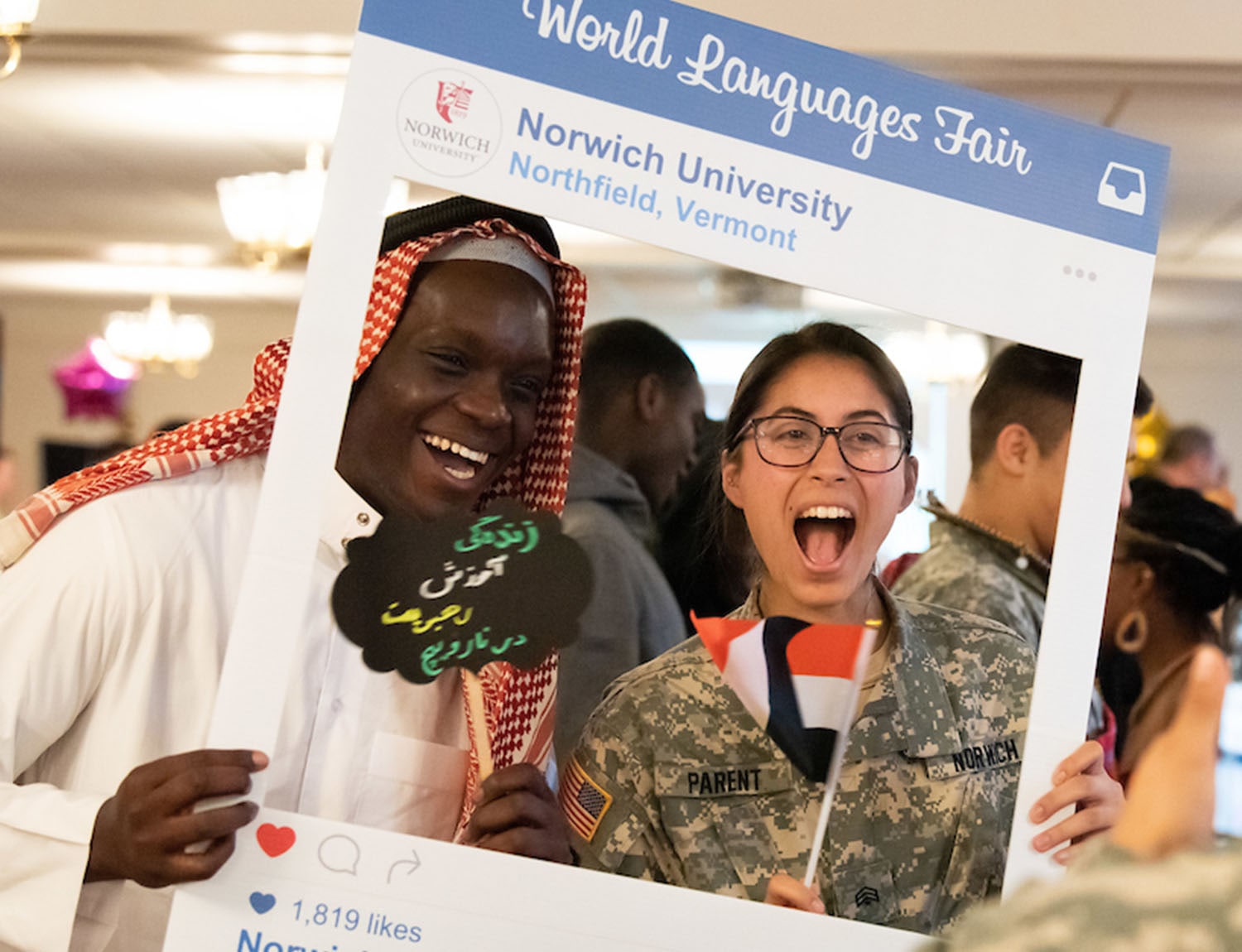 Bagpipes bleated, dancers stomped and laughter burbled from Milano Ballroom’s every corner. The collective message was, “Yes, we speak your language.”

The second annual World Languages Fair on Feb. 21 brought 150 people to explore 23 languages (24 if you count dog, spoken by a friendly canine interloper), and traverse the globe without a plane ticket or passport. Forty-five student volunteers staffed tables and exhibits.

As it had in 2019, the fair featured the best student-made videos showing a common Norwich phrase spoken in many languages. Last year’s phrase was “Norwich Forever”; this year’s was “Live, learn, lead at Norwich.” The phrase was spoken in 30 languages in the final videos, shown on a big screen at one end of the ballroom.

Students at the fair sported full international regalia, such as the wool jacket and kilt freshman political science major Shane O’Hara wore. Some observers might have thought the outfit Scottish, but O’Hara said it was Irish, featuring a blue, red and gold plaid of his ancestral home in Sligo, Ireland.

O’Hara had helped give the fair a musical backdrop, playing bass and tenor drums with the pipe and drum band. The sound more than filled the ballroom, he said.

“Basically anything that goes ‘boom, boom, boom,’ that’s me,” O’Hara said. “We actually had to open the doors so some of the sound could travel out because this room is so small and tight.”

Kelly, who acknowledged her name reminds some people of another international figure, Monaco’s Princess Grace, said having the languages fair showed that even a relatively small university can diversify in a big way.

“It’s always important to recognize diversity,” Kelly said. “It broadens your horizons and allows you to see things from another perspective, which makes you a little more worldly.

“I absolutely love to see everyone in their traditional clothes,” Kelly added. “Everyone is having so much fun … and I think this is a way for people to say, ‘Whoa, there’s so much more in Northfield and Vermont.’ People are curious, they see this picture and say, ‘How do you say this?’”

Nirmal Tamang, a junior engineering student from Nepal, said because his nation speaks 123 languages, there are myriad ways to say just about everything there. His tablemate and fellow Nepali, Sarbashree Rayamajhi, a senior electrical and computer engineering major, said her classmates helped her adjustment when she arrived in the United States three years ago; although she’s a civilian student, cadets from a Corps of Cadets platoon welcomed her as one of their own, she said.

Rayamajhi wore a kurta, a long knee-length top, and trousers called salwar, traditionally worn by Nepali women. She said that from her first year on campus, she’d bonded with other international students, from China, Kenya, Macedonia and her native Nepal.

Kpatcha Massina, a junior international studies major and cadet from Lome, Togo, wore a thobe, a long-sleeved, ankle-length robelike garment worn by Arabian and Iraqi men, and showed an oud, a pear-shaped instrument he described as an Arabic stringed guitar. Sadly for the evening’s audience, he didn’t play.

Massina said he enjoyed celebrating and learning about other languages at the fair; such activities constituted the Norwich experience, he said. And though he liked the dancing, he wasn’t sure he’d do any.

Donley said the fair emphasized languages, not nations, for inclusivity; many languages, including French, Spanish, Swahili and Tagalog are widely spoken across borders, she said. Donley added that working with Thomas has helped introduce new ideas and unity, blending modern language and international students.

“I might have a Francophone student from Rwanda and Kaitlin might have a modern language student speaking French and we can bring them together to have a conversation,” Donley said. “And it brings the world together in a really cool and exciting way.”

“They’re experiencing, here, where they live, the diversity that makes everything so fun … and so dynamic,” she said. “It’s something we experience every day in our departments … we have this chance to open up what we do to everybody and we just want to keep spreading that positivity and making it really well known that it’s here at Norwich.”

Given enough positivity, it seemed, anyone could gather a little more language fluency or dance fluidity. As the fair wound down and the last dance group took the ballroom floor, even the once reluctant Massina joined in.

He would try, after all.