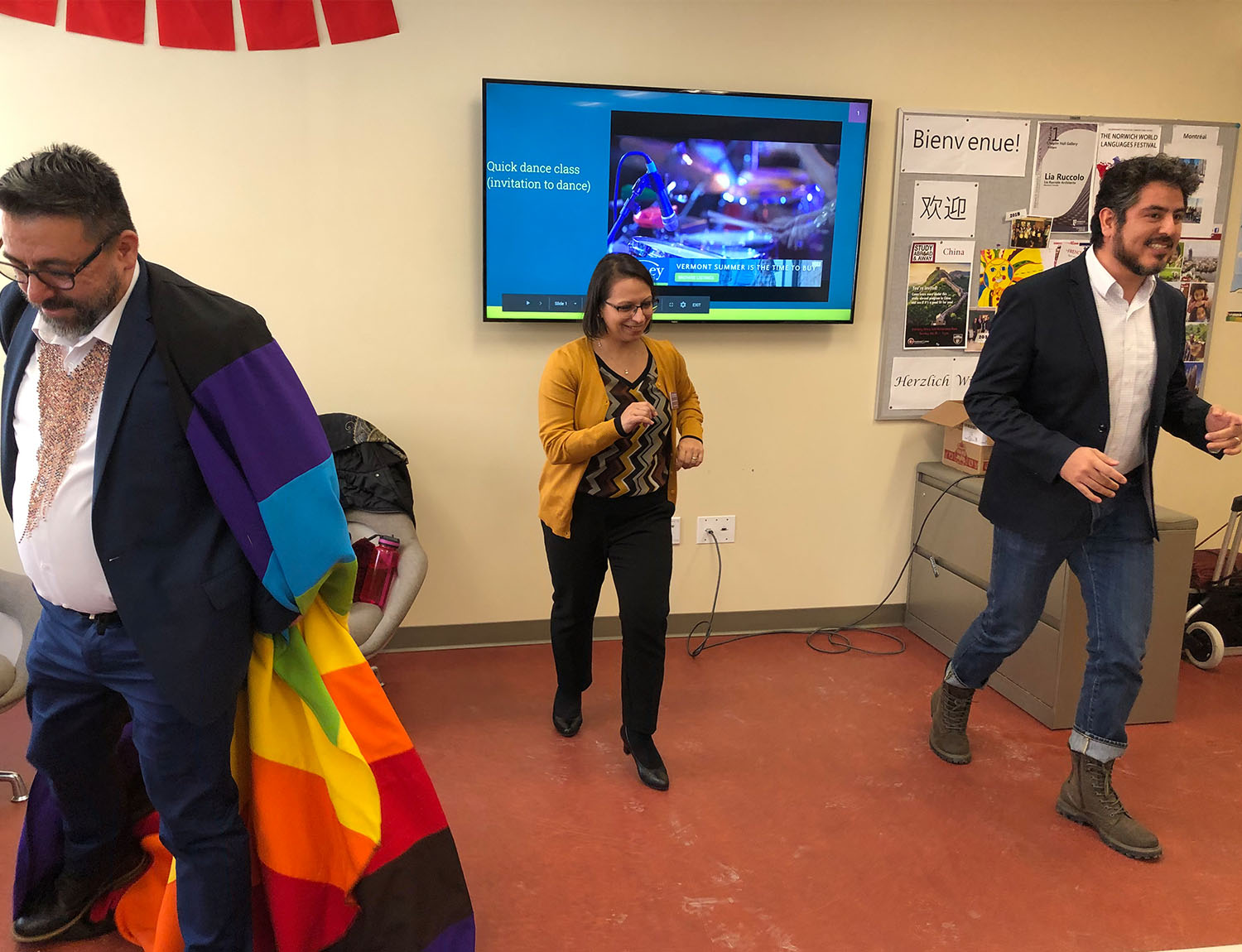 In English, definite and indefinite articles “the” and “a” are blissfully gender-neutral. For example, “I left my cellphone on a table.” There goes several hundred bucks. “The ice arena? I left it after Norwich University won the hockey game.” But in Spanish, every object has a gender. The building? El edificio, masculine. A table? Una mesa, feminine.

All of this is objectively anodyne, until we turn from articles to personal pronouns. What if someone is Latino but identifies as neither masculine nor feminine? Is there an alternative, and who gets to decide?

“In the Spanish of 2020, there are aspects of the language that are intimately tied to issues like identity and representation because those are topics being explored more broadly within society, politics (and) culture.”Kaitlin E. Thomas, Norwich University Spanish professor

Students from several Norwich foreign languages classes, mostly Spanish but some German, explored this question on Friday at North Hall in “Latinos/as, Latinx and Latiné,” a session on language and identity.

Dr. Marialuisa Di Stefano, a lecturer in language literacy and culture from the University of Massachusetts, Amherst; Abelardo Almazán-Vazquez, a  Spanish teacher at the Putney School, a private Vermont boarding school; and William Yepes-Amaya, a world language and Spanish teacher from the Belmont Day School in Belmont, Vermont, led the discussion, which involved 50 people, Corps and civilian students and some faculty.

Dr. Kaitlin E. Thomas, an assistant professor of Spanish at Norwich who organized the seminar, said discussing identity and representation matter because social and cultural influences affect how languages are written (masculine or feminine words) or spoken.

“We can’t learn a language without learning how it is actually used in the real world,” Thomas said. “In the Spanish of 2020, there are aspects of the language that are intimately tied to issues like identity and representation because those are topics being explored more broadly within society, politics (and) culture.

“Topics like Latinx-Latin@-Latiné foster an awareness of conversations taking place within a culture that is not one’s own, and prepares our students to, at least peripherally, be aware,” she added. “If, in a postgraduation capacity, one of our students were to work with or for a Spanish-speaking individual who opts to use Latiné-type grammar for whatever reason, our students are culturally, linguistically prepared to do so in an appropriately sensitive way.”

In the 90-minute session, Di Stefano, Yepes-Amaya and Almazán-Vazquez discussed how people identify themselves — at Norwich, they might give their Corps of Cadets company, or major or class year. There are myriad other ways to identify, too, the guests said — as immigrants of different nationalities (Yepes-Amaya, Colombian, Almazán-Vazquez, Mexican, Di Stefano, Sicilian), by sexual orientation (gay, in Yepes-Amaya’s case) or by gender — male, female or nonbinary alternatives.

Starting the session by dancing salsa, the group illustrated shifting, or fluid, gender roles. Although in many Latino cultural traditions (or U.S. television shows like “Dancing with the Stars”), male dancers lead, women dancers follow and partnerships are homogenously heterosexual (male-female), these roles are shifting, they said. Thomas danced first with Yepes-Amaya (after he asked her to do so) and Di Stefano with Almazán-Vazquez, but then Thomas partnered with Di Stefano, leaving the men to pair off.

“If I can show you something like this that’s not only about dancing, but about intercultural competence, interpersonal communication, consent, respect,” he added. “May I dance with you, may I hold your hand? May I be the person that leads you or allows me to be led? This is an invitation to start seeing this with a different lens.”

Di Stefano said gender and identity discussion mattered particularly for Norwich students, because when they graduate and enter the armed forces or private sector, these students will serve and lead in the ever-diversifying United States or abroad.

So, the presenters led exercises in which students examined and challenged gender roles and identity assumptions. In one activity students tied genders to life rites: Learning to walk? Neutral, the students agreed; same with learning to feed oneself. Having tea and cake with grandma? Feminine, said one student, raising arguments from another. Playing sports? Could go either way, they said.

AnnaLeigh Runion, a senior and Corps of Cadets member who’s studying exercise science, international studies and Spanish said the exercises, and the lesson, showed how the Spanish language is perhaps also wrestling with identity, trying to adapt to a time when gender is more fluid.

“Before this, I never really knew that it was so hard for people to identify as ‘X,’ Some people are left out between these big labels.”Kpatcha Massina '21, Norwich University student

“The exercises we did revealed to me that gender does have an impact on our everyday experiences, whether we like it or not,” Runion wrote in an email. “Something that stood out to me … was when we were talking about … riding a bike. On the surface, I didn’t think gender would’ve impacted that experience until someone said that the kind of bike that you would get would be different whether you were a girl or a boy. I resonated with that because that was me as a kid.

“I would have hated getting a pretty pink bike with a basket and streamers on the handles. I rode this cool red mountain bike my dad bought for me,” she added. “I loved it, but I was asked by my family and friends why I didn’t want a different bike that was more girly.”

“Before this, I never really knew that it was so hard for people to identify as ‘X,’ Some people are left out between these big labels, and they just reminded me that,” Massina wrote in an email. “I also learned that many words in French, Spanish, English and other languages mean different things to us based on our gender. … I learned not to assume things and be more mindful of others.”

Beyond gender, Di Stefano said, people identify with geographic space, experience and language. For example, although Di Stefano grew up in Sicily, and not Latin America, she embraces the Latiné culture as one of the multiple aspects of her hybrid and fluid identity.

She suggested that many Spanish speakers may prefer to call themselves Latinos rather than Hispanics because Hispanic was a term U.S. government Census takers began using widely in the 1960s to generically identify Spanish speakers, regardless of their geographical roots. Yepes-Amaya added that the nomenclature is archaic, having evolved from “Hispania,” the Romans’ now centuries-old name for the Iberian Peninsula’s residents.

The Latinx-Latin@-Latiné debate, Di Stefano said, aims to decolonize the teaching of the Spanish language, to understand its many identity markers, and address inclusivity partly by resisting linguistic male dominance. Under traditional Spanish language tenets, a room of 100 adults would take the masculine adjective “Latinos” even if it had 99 women and just one man.

Replacing the “o” in “Latino” with the x, @, é or changing it to the classical Latin diphthong ae have been floated as solutions for singular nouns; “e” has been suggested as a replacement for “o” in plurals (“Latinos” would become “Latines”). Replacing the masculine “o” at the end of nouns would fight male language dominance and nod toward gender inclusivity for people identifying as “agendered,” nonbinary or gender-fluid, she said.

Resolving the Latino nomenclature and Spanish pronoun conundrums will happen slowly, after meeting fierce blowback, and probably have many iterations, Yepes-Amaya said. For example, Latinx, championed by the feminist and Chicano movements and refracted through critical race theory, isn’t perfect partly because it’s hard to say.

However, Yepes-Amaya said, by evaluating the meaning of labels and their social impact, societies can work to make themselves more accepting, so people can meet, interact and feel included without ever having to hide who they are.

“Ask a question to yourself or the person next to you,” Yepes-Amaya told the students. “That’s how we open spaces to understand what our worldview is and where our worldview needs to get to.

“Because, later on,” he added, “you’ll see that being able to ask ourselves questions and ask others questions is going to help us build those bridges that we need.”