Up where he belongs 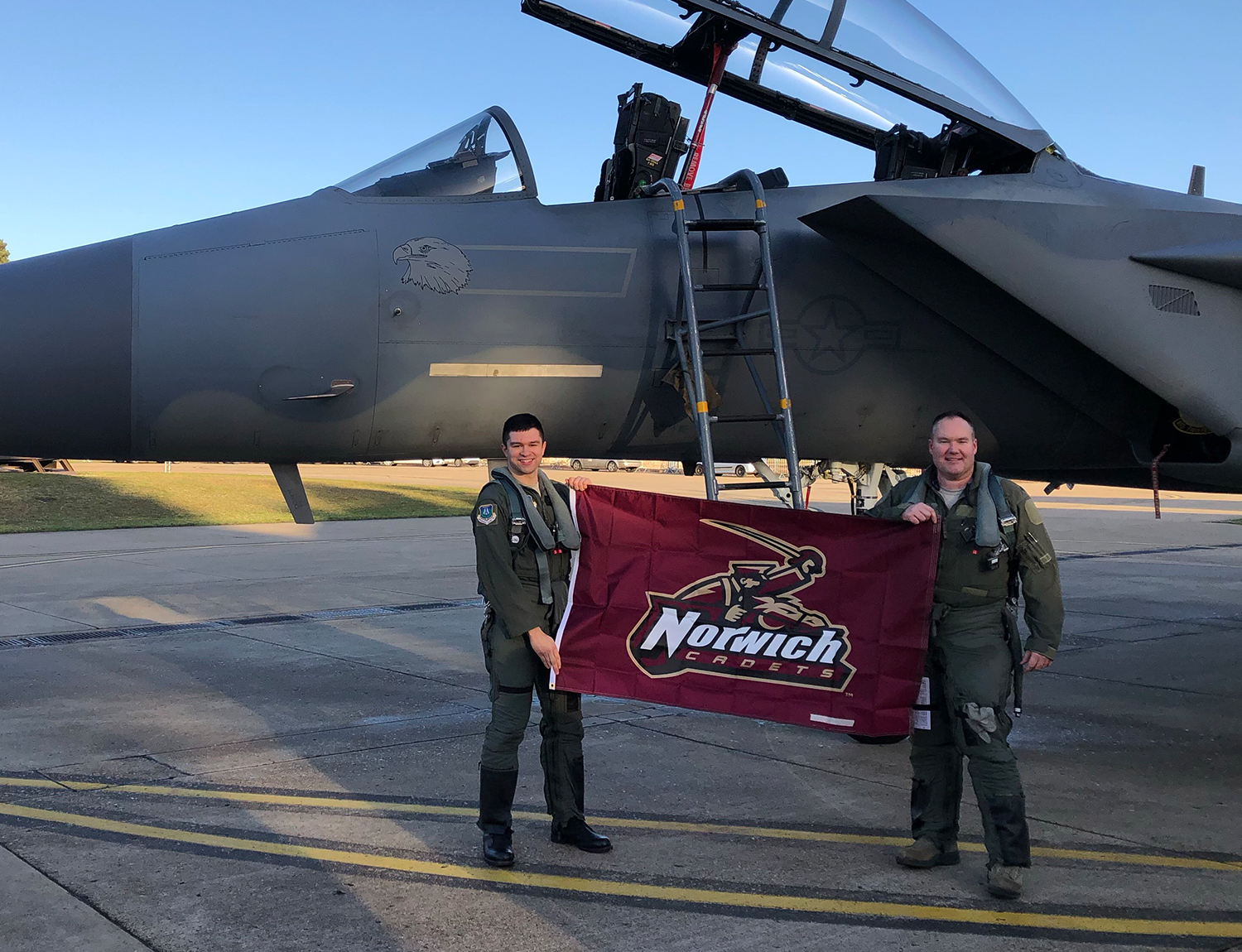 Zane Fockler was chasing rare air last summer. The Civil Air Patrol cadet and current Norwich University student had reached the exam phase for the Gen. Carl A. Spaatz Award, the Civil Air Patrol’s top prize. Since the award’s launch in 1964, fewer than 2,400 cadets have won the Spaatz Award, less than 0.5 percent of all cadets.

At last, he’d reached final testing. For the physical fitness portion, he practiced situps and pushups and ran for hours, cutting his mile time to less than 6 minutes, 30 seconds, as required to pass. For the academic portion, he’d spent three hours a day for a solid month rereading and highlighting hundreds of pages of text for two 60-minute, 60-question multiple-choice tests.

One test covered four volumes of “Learn to Lead” (about 580 pages in all), five chapters of “Cadet Program Management” and the 100-page Drill and Ceremonies Manual. The other covered the 680-page “Aerospace: The Journey of Flight.” Anything, from any page, was fair game for a test question.

The final test step was writing a 60-minute essay on moral character. Fockler had studied the topic; his fingers were poised to wring paragraphs from laptop keys.

But he sat slumped, and stumped.

“You don’t know what they’re going to hit you with. You just have to be prepared to argue your point,” he said. “There I was, half an hour in, and I had just two sentences. And I was like, ‘There’s no way.’ I thought, ‘I’ve got squat. I’ve got nothing.’”

“There was a poster … that said, ‘Live the values of the United States Air Force,’” Fockler said. “And I looked at that and it clicked in my mind. … I just elaborated on what the core values of what Air Force were in relation to the prompted question.

“That last half hour was spent furiously typing,” he said. “But I got it done.”

Fockler, who was born in Las Vegas, lived in Japan until age 2, and grew up in Suffolk, England, said he joined the U.S. Air Force Junior ROTC and the Civil Air Patrol because flying fascinated him. He said he loved watching U.S. Air Force jets take off and land on the Royal Air Force Lakenheath base, where his family had moved, and the nearby RAF Mildenhall base.

Fockler said he joined the Civil Air Patrol, which follows similar rank structure, customs and courtesies as the U.S. Air Force and is devoted to aerospace education, emergency service support and cadet programs, at age 14. He worked his way up to cadet commander of Suffolk’s Mildenhall Cadet Squadron.

Fockler, 19, began study at Norwich in the fall and in December returned to England to receive the Spaatz award, which honors cadets who have demonstrated excellence in leadership, character, fitness and aerospace education. He became the first Civil Air Patrol cadet from the United Kingdom, and only the third ever overseas, to earn the award.

The award is named for Carl “Tooey” Spaatz, the U.S. Air Force’s first chief of staff. Spaatz commanded the Allied air campaign against the Nazis in World War II and the atomic bombings of the Japanese cities Hiroshima and Nagasaki.

Fockler is Norwich’s second Spaatz Awared winner this decade.Josiah Boggs, who attended Norwich from 2011 to 2016, and graduated with a physics degree, received the Spaatz Award in January 2014. He’s now a U.S. Navy aviator.

“Listening to Zane’s senior leaders talk about him and his achievement and watching the younger cadets looking up to him with so much respect filled my heart with pride, joy and appreciation,” Kelli Fockler said by email from England. “Of course, I was very proud, but also thankful for so many people who believed in my son and took time ... to guide him, teach him, train him and help build him into a leader.”

“He had caring JROTC instructors in high school and additionally outstanding leadership in (Civil Air Patrol) via (U.S. Air Force Lt. Col. Darren) Cruz and Maj. (Walt) Brown (the Mildenhall Cadet Squadron deputy commander),” John Fockler said, also by email from England. “I was amazed at how caring the squadron personnel were at making the flight experience so memorable for Zane.”

Stratton showed his appreciation by granting a piece of Fockler’s dream — a familiarization flight in the back seat of an F-15D. Fockler took the flight on a clear early January afternoon and was thrilled, calling it “something special.”

The power of ambition

In a January story on the Royal Air Force Base Mildenhall’s website, Brown said Fockler’s determination to earn the Spaatz Award had radiated like heat.

“He immediately decided that he would achieve the Spaatz Award,” Brown said, “and set himself on the path to completion.”

Cruz, a 35-year Civil Air Patrol veteran who served with the Ramstein Cadet Squadron and in the Kentucky, Georgia and New Mexico wings, issued the document clearing Fockler to pursue the Spaatz Award. In a June article on the Civil Air Patrol website, he said Fockler generously shares knowledge and supports peers.

“Zane is a leader of cadets and thoroughly enjoys sharing his knowledge with his peers and subordinates,” Cruz said. “His determination and willingness to strive for higher achievements has always been evident as a young cadet.”

Fockler said those experiences, and winning the Spaatz Award, readied him to pursue new ambitions (an environmental science major and an Air Force commission) and seize new leadership chances in the Corps of Cadets and at Norwich.

“I hold no special weight on this campus; as a freshman, I’m at the bottom rung,” he said. “But you’ve got to start, and work your way back up to the top.”