Watch me zoom around, way up off the ground 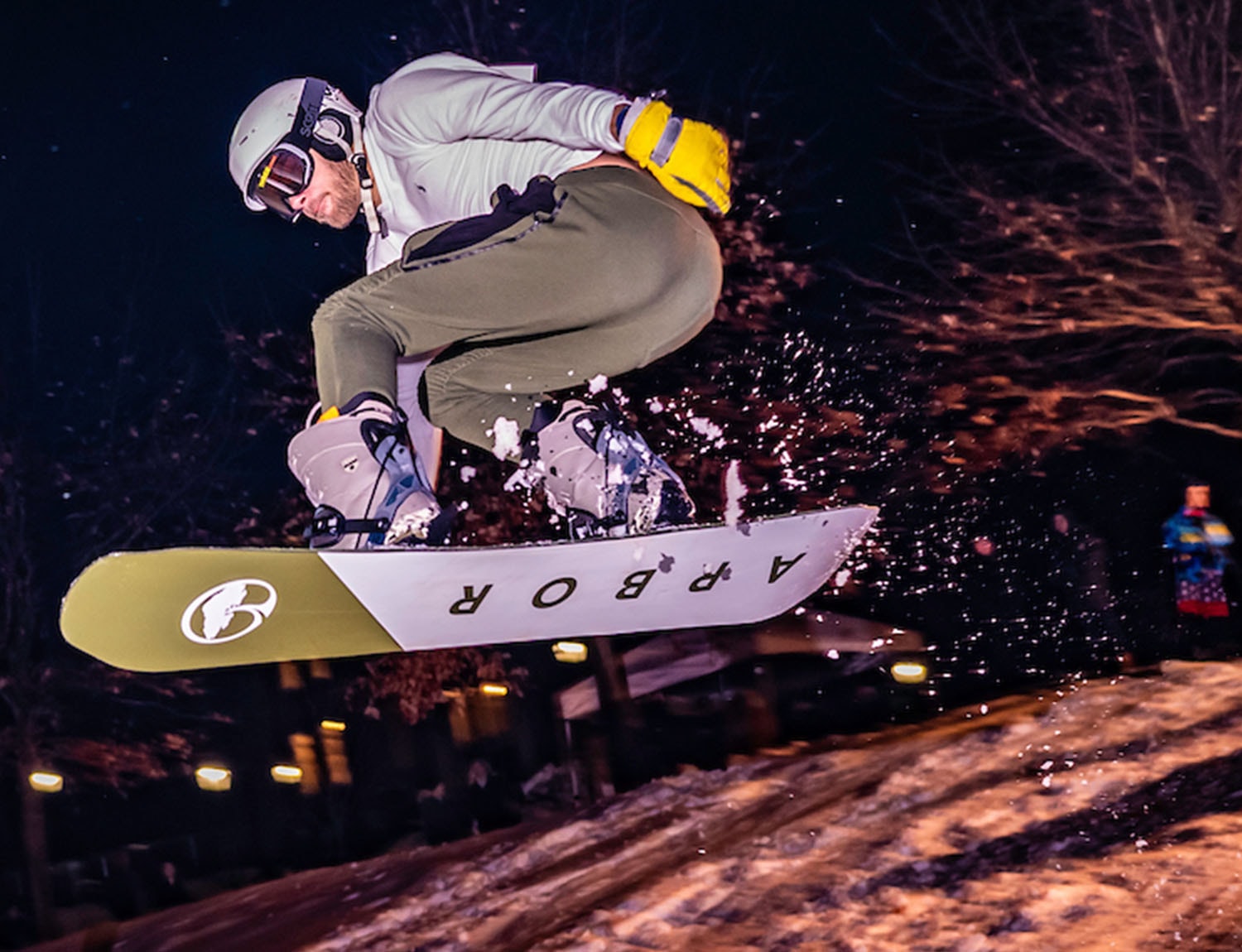 Temperatures on the Wise Campus Center green hovered in the single digits Fahrenheit on the evening of Feb. 14, but the annual Rail Jam put plenty of thrill in the chill. Skiers and snowboarders pressed, spun and caught air with flair.

Rail Jam, hosted by Norwich University’s Ski and Snowboard Club, was a marquee event for the Winter Carnival, which included a Skate Night at Kreitzberg Arena and a Winter Ball at Plumley Armory on Saturday.

“There is really nothing else like it,” Meyer said by email. “It is a place where you can break away from looking like everyone else in uniform and show off skills that would otherwise never be seen.”Ryan Meyer ’20, skier and Rail Jam competitor

For the uninitiated, a rail jam involves snowboarders and skiers traversing a course that includes a ramp, a fixed “rail,” which can be a pipe or a collection of boxes (the Wise Campus Center green course had both), and a landing area. Often if not enough natural snow exists to enable the competition, an ice rink or ice company will bring in manufactured snow. (Real snow was abundant this year).

Competitors ascend the ramp, travel down to the rail element and perform turns, presses (when bodyweight is applied to either end of a snowboard), slides, flips and occasionally face-planting crashes. Meghan Oliver, the Ski and Snowboard Club’s faculty adviser, said Norwich’s Rail Jam has an open format, meaning competitors can get several chances to hit the rails during allotted periods for skiers or snowboarders.

Judging has varied, she said, from student panels to crowdsourcing.

The United States of America Snowboard and Freeski Association website lists judging criteria including body balance and body control during takeoff and execution, cleanliness of the midtrick grab of skis or snowboards and the smoothness of landings. Ski and Snowboard Club President McKenzie DeBruin, a senior architecture major, said popular tricks include backside or frontside 180s (tricks including midair 180-degree turns) and nose or back presses, when snowboarders balance on the noses or backs (tails) of their snowboards.

Norwich’s Rail Jam, which turned 10 years old this year, has attracted hundreds of students and some local media, including Burlington CBS affiliate WCAX-TV, Channel 3, in prior years. But DeBruin said the cold thinned this year’s crowd to about 60, though spectators flowed in and out of the sidelines.

Nevertheless, Rail Jam had all the elements for fun, thanks to Student Activities Director Greg McGrath and the Campus Activities Board — food vendors, music from a disc jockey and prizes to encourage the 18 competitors, including hoodies, mittens and a top award of a Rome Snowboard and Armada skis. Sponsors included Darkside Snowboards of Killington, Vermont, the Sugarbush Resort in Warren, Vermont, and the Bolton Valley Ski Resort in Bolton, Vermont.

REMEMBERING WHEN: Watch video of the first Norwich Rail Jam from 2011

Staying chill in the chill

DeBruin, who competed on a snowboard, said the Rail Jam attracts all ability levels; she said she’s a relative novice compared with many other students. And although there’s a prize for the winner, she said the competition is relaxed.

“It’s supposed to be fun … the stakes aren’t very high,” she said, adding that layered clothes and trips up and down the stairs to the ramp kept her warm. “We want to see what other people can do and encourage more people to join us and draw out the ski and snowboard community from the student body.

“No one cares if you’re a civilian, cadet, a freshmen, a senior, or if you’re the best out there or not,” added DeBruin, who has worked as a snowboard rental and repair technician at Jay Peak Resort in Jay, Vermont, “as long as we’re sliding on snow we’re all having a good time.”

Oliver, who is also associate director of Norwich’s Career and Internship Center, said she helped start Rail Jam to build community and camaraderie. Many students on campus ski and snowboard, she said, and Rail Jam lets them show their skills and revel in seeing others’.

“Rail Jam is just a way to allow students to do something different than the typical. Having it on the green lets students come out of their dorms and the barracks and be part of it,” Oliver said. “There’s a lot of community feel.”

Ryan Meyer, a freestyle skier, Corps of Cadets captain and senior cybersecurity major, helped prepare the Rail Jam before competing as a freestyle skier. (He’s competed all four years at Norwich). Meyer said he began working on the course at 2 p.m. and didn’t go back inside until the competition was over.

“There is really nothing else like it,” Meyer said by email. “It is a place where you can break away from looking like everyone else in uniform and show off skills that would otherwise never be seen.”

Meyer, who won this year’s ski event, said he’s always enjoyed the thrill of competing and excelling in front of his cadre and peers.

“It wasn’t one single trick that got me the win, but the ability to be consistent and do harder tricks than everyone else,” he said. “Competing is always a stressful but fun time, the thrill you get from winning or the pain you get from defeat is like no other.”