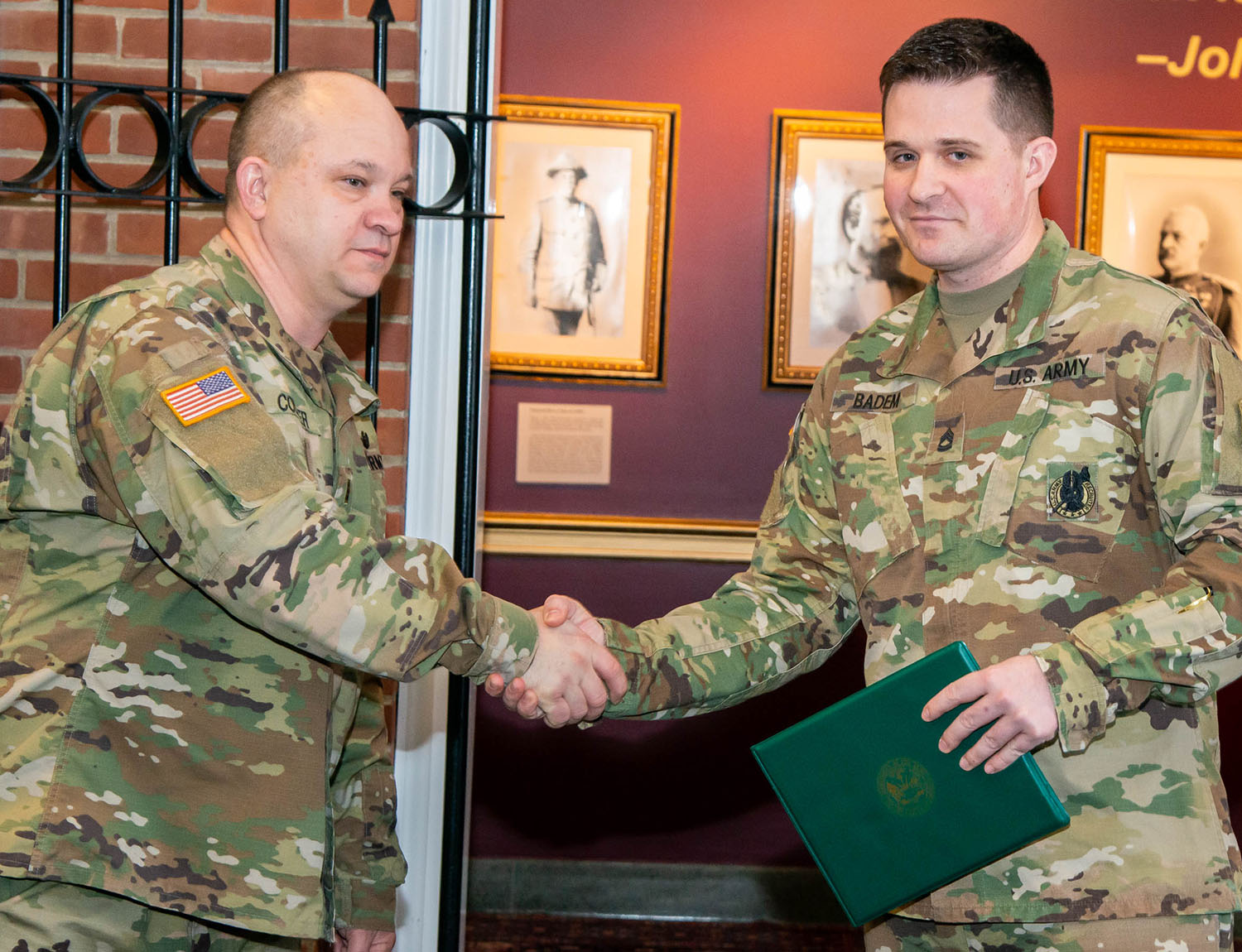 The message from James Montgomery Flagg’s famous recruiting poster is 103 years old, but still applies for young people — yes, Uncle Sam wants you for the U.S. Army. And if prospective students choose the Army and college studies at Norwich University, a Vermont reservist and Army recruiter said, Uncle Sam has scholarships to help.

Army Sgt. 1st Class Rick Badem, chief of the Army’s Barre Recruiting Station, has made it his mission to get scholarships, particularly the Minuteman Scholarship, to more Vermont recruits. In just a year, he helped boost the number of Norwich students backed by the scholarship from one to 10. (He also helped boost the size of the 75th Innovation Command’s Boston City Group Detachment on Norwich’s campus from three cadets in spring 2019 to 16 now.)

Badem said in December that the Army Reserves awarded more than $1 million in scholarships to students attending Vermont colleges in 2019. On Tuesday, in a ceremony in Jackman Hall’s foyer, the Army awarded Badem an Army Commendation Medal for his work.

“The young men and women who join the Army Reserve and get Minuteman Scholarships, they come to Norwich and walk out pretty much debt-free, which is really awesome.”Henry Collier, U.S. Army Reserve

“We’ll hopefully have a lot more (Army Reserve enlistees),” Collier said. “Next year, I’d like to see 25 or 30 cadets in the fall.”

The Minuteman Scholarship, introduced in 2015, pays full (uncapped) tuition and fees or $10,000 toward room and board at any college or university served by an Army Reserve Officers’ Training Corps program. It comes in one-, two-, three- and four-year varieties and will pay the full tuition and fees at Norwich. Then, Norwich’s ID White Scholarship covers the room and board.

“The young men and women who join the Army Reserve and get Minuteman Scholarships, they come to Norwich and walk out pretty much debt-free, which is really awesome,” said Collier, who is also program manager for Norwich’s online degree-completion bachelor of science in cybersecurity degree. “(The scholarships also) capture that pool of candidates that Norwich really wants to have as students coming in — bright young men and women who want to serve their country, who want to give back to society.

“The scholarship shows these young people that college is a reality,” he said. “It takes that burden of cost away so they can say, ‘I can go to college. I can better myself … I can set myself up for a much better life after graduation.”

In a December interview, Badem said he’s used face time at university events and career fairs and social media’s power (mostly on Instagram and Facebook) to spread the word about the Minuteman Scholarships, which are new enough to be fairly unknown. A 2016 news story on the Army Reserve’s website reported, for example, that although 120 Minuteman Scholarships were allotted that year, only 34 were awarded.

Grateful for a gateway

“I’ve always wanted to be in the Army, but I’ve also wanted to be in law enforcement, so this scholarship lets me do both at the same time,” said Moshier, who’s the fifth person in his family, including his father, to attend Norwich.

Vinny DiMauro, a Norwich sophomore business management major from Shrewsbury, Massachusetts, received a three-year Minuteman Scholarship. He said he chose Norwich to poise himself for real-world success and that he hopes to one day help the military as it has helped him.

“After graduating, I plan on joining a business that will help with hiring vets or reservists or active-duty soldiers,” he said.

“Having all the branches together, I thought, was a great way to have camaraderie,” Reihs said in the video.

And Faith Odegbami, a sophomore English and Spanish major from Manassas, Virginia, received a three-year Minuteman Scholarship. She said the scholarship and Norwich have helped her prepare for a plethora of postcollege opportunities.

“The plan is to pursue a Ph.D. program in English and get my master’s in Spanish so I can teach,” she said. “And later on, in the future, there’s a lot of possibilities. I like to bounce ideas around about it.”

“When I first met him, I knew he was a bit different than others … he’s one of the top recruiters I’ve ever worked with,” Collier said, lauding Badem for strengthening the Army Reserves’ ties with the university. “He doesn’t play any games, he’s not a high-pressure salesperson, he simply has conversations and creates relationships, which is what recruiters should be doing.”