Drawing out the narrative 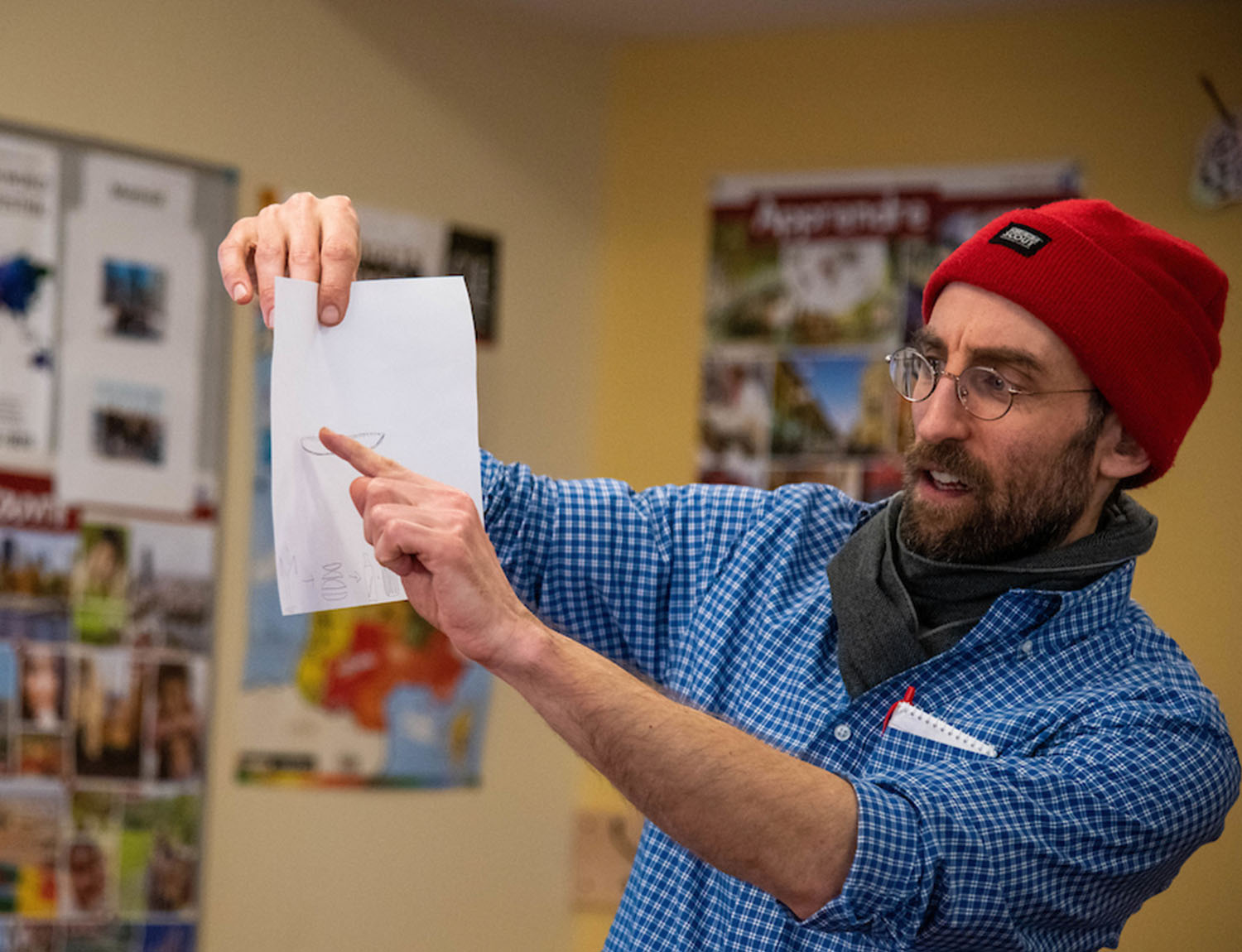 From the simplest tools — slips of paper and stubby eraserless pencils — and the briefest moments — a five-minute cartooning session — can come sharable art and insightful expression, graphic artist and cartoonist Marek Bennett showed Norwich students Wednesday. Lengthen the drawing time and add contributors and collaboration, he suggested, and this art can direct social change.

Bennett was on campus to discuss “El Viaje Más Caro” (“The Most Expensive Journey”) a graphic novel to which he contributed that spotlights the experiences of Latino migrants in Addison County, Vermont, and to work with students from Dr. Kaitlin E. Thomas’ Spanish classes, including some from her upper-division La #Hashtag Nation course. The #Hashtag Nation students had been studying graphic novels and comics as tools of activism to give voice to the voiceless.

“(‘El Viaje Más Caro’) is a project that’s here in Vermont, about migrant workers who are in Vermont, in the community where our students are.”Dr. Kaitlin E. Thomas, Norwich University Spanish professor

“(‘El Viaje Más Caro’) is a project that’s here in Vermont, about migrant workers who are in Vermont, in the community where our students are,” Thomas said. “So, it’s a really amazing opportunity to connect the dots between what we’re doing on campus and what’s happening around.”

Bennett is one of 18 contributors to “El Viaje Más Caro,” which, as Thomas wrote in a story posted Tuesday on Public Radio International’s website, was sparked by Julia Doucet, an outreach nurse at the Middlebury, Vermont-headquartered Open Door Clinic.

Doucet sought an outlet to tell these workers’ stories and found it in a graphic novel.

Thomas, who joined Norwich’s faculty in 2015, said this artform offers an accessible way for people of all ages, especially students, to explore complicated, controversial topics, like immigration, deportation and detention.

Bennett, who’s been a professional artist since about 2009, agreed.

“That’s why I’m here,” he said, “because these classes that are working with these issues are using graphic narratives to address and explore and learn about the issues, not just to raise awareness, but to really discover things about them.

On Wednesday in North Hall’s Language Resource Center, Bennett showed about 25 assembled students and guests a short live-action film of a Nicaraguan migrant worker’s young daughter making a comic. With a series of circles and lines, she told the story of a chicken who had been eating corn but was caught and killed by people and made into tasty soup. (Mercifully for readers, she skipped the blood and guts.)

The comic lasted only a few panels, but showed unfettered creation — the child didn’t care that her chicken, a featherless oval, hardly resembled real fowl — and experimentation — the bird’s legs sprouted from different angles in different panels.

Bennett, 45, said he’s been cartooning all his life, inspired by pencil-wielding adults including his doodler dad. As a kid, he said he loved Tintin, Transformers and G.I. Joe comics.

At Brown, he learned from artists on his campus and the nearby Rhode Island School of Design. And, though he was studying math, he drew a daily comic for the student newspaper. The strip, a science fiction adventure called “Quasar Blasters,” he said, taught him to generate new ideas quickly, finish projects and effect change. He drew the strip he’d wanted to read.

People may abandon drawing because they think they need artist-level verisimilitude to be legitimate, but Marek called this notion constricting and false; imperfect drawings, he said, make some of the most interesting cartoons.

Furthermore, he said, anyone, even little kids, like the one in the film clip, can create visual narratives, adding that calling this work “comics” is limiting. People expect comics to be comedic, or somehow frivolous.

“This is something much bigger than that,” he said.

Comics are wonderfully everyperson, Bennett told the class. Anyone with a single sheet of paper, scissors and a few folds can make a comic book. (He showed the class how to build in surprise plot reveals in even eight tiny pages.) Anybody with a photocopier can become a published author, he said; draw, duplicate, voilà. And because pictures are universal, any reader who speaks any language can understand them.

Bennett suggested the students think FAST, using faces, action, settings and text, to tell their stories. The students practiced Wednesday, first depicting how food they’d eaten for lunch had reached their plates, then starting a narrative on an experience from where they live.

“It gives everyone a viewpoint, and gives a background knowledge that a lot of people would never think of or never imagine,” she said, explaining why she liked the exercise. “It gives them both a verbal and visual representation.”

Blanca Ostos, a junior neuroscience, psychology and Spanish major, said she could relate to the class’s recent lessons particularly because her family is Mexican. She hadn’t realized a project like “El Viaje” existed.

With her pencil, Ostos had heeded Bennett’s call to embrace imperfection, skipping judgment and just drawing. Because she’s a U.S. Navy enlistee, Ostos said she’d start with Navy sorts of images, an American flag, perhaps, and go from there.

“I always used to think that to do not just cartooning, but just art in general, you needed to have a lot of training and experience,” she said. “But I realize that anyone can be a cartoonist. Just put (down) words and draw something. It could be anything, it doesn’t have to be supremely good, as long as a person understands it.”

Bennett said he always marvels at how much students come to understand, as they draw. Breakthroughs and discovery come quickly and often.

“(Students) always come up with ideas that I never would have come up with, or that I wouldn’t on my own,” he said. “And when I see their projects … a couple of those projects they were drawing just now, I can see that even in a couple of minutes, they looked like they’d be really interesting and readable to second- or third-graders.

“I love that you can take something from a complicated college-level course and draw it out and suddenly lots more people can read it.”