A life marked by monumental tasks 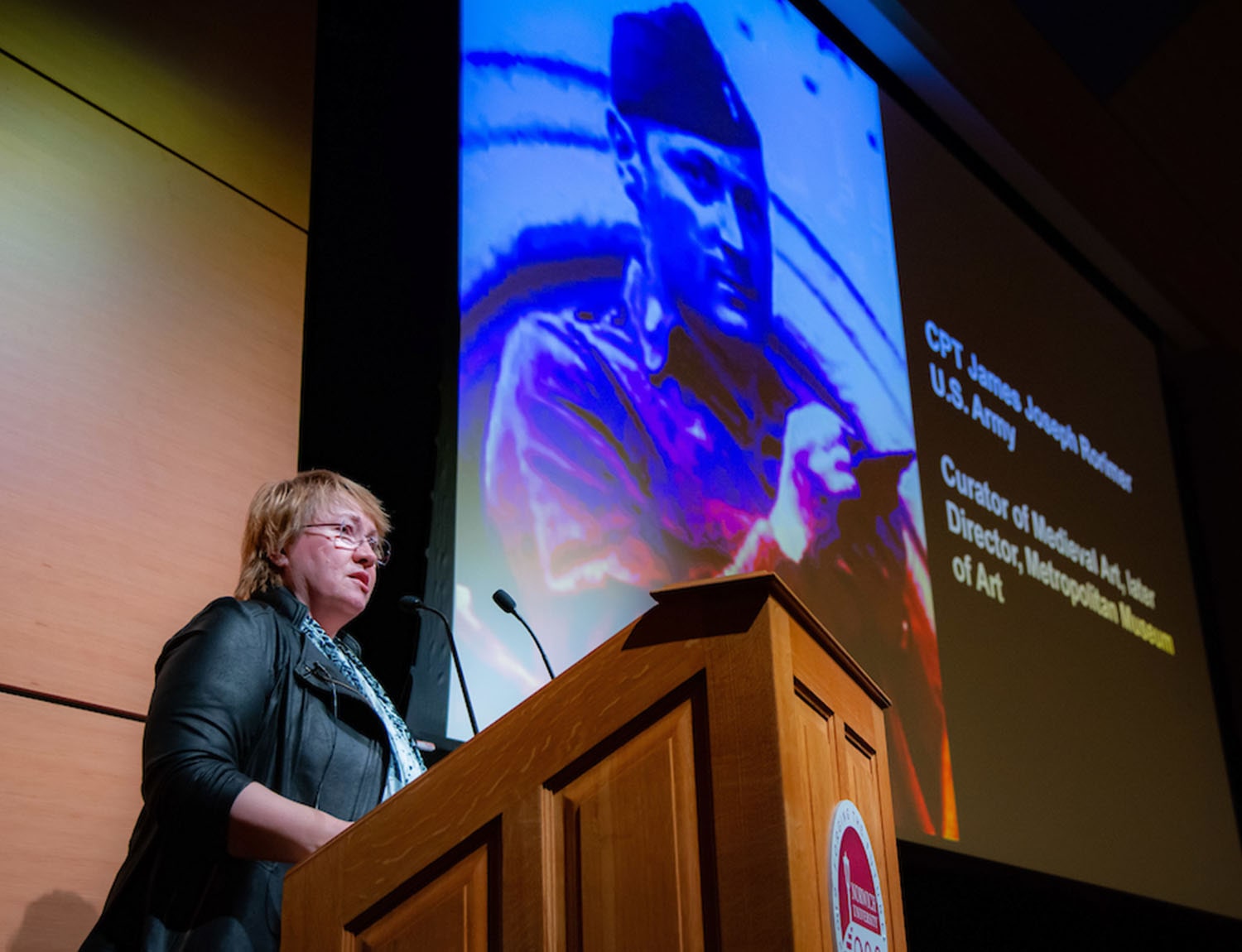 Buried amid war’s rubble and ruin may lie artwork — paintings, pictures, sculptures — that speak to and about a civilization, culture and era. Corine Wegener has spent years working to save them.

On Feb. 5 in Mack Hall Auditorium, Wegener, director of the Smithsonian’s Cultural Rescue Initiative, described the U.S. Army’s efforts to save cultural artifacts past — the post-World War II push depicted in the 2014 movie “The Monuments Men” — and the present — a modern initiative announced in October.

In her talk, “Today’s Monuments Men and Women: The Role of the Military in Cultural Heritage Protection,” presented by Norwich University’s Sullivan Museum and History Center, Wegener first highlighted her origin story. She joined the U.S. Army ROTC at the University of Nebraska, Omaha (following her Army veteran grandfather’s example), entered the Army Reserve, deployed to Bosnia-Herzegovina and, upon returning to the United States, concurrently joined the Army’s Civil Affairs Corps and the Minneapolis Institute of Arts, first as an intern, then as a research associate, later as an associate curator of decorative arts, textiles and sculptures.

“We’ll have to grow our own (force). ... And we’ll look around in the Army and see who else might be interested in joining us for this task.”Corine Wegener, Smithsonian Cultural Rescue Initiative

Along the way, she married and earned an art history master’s degree from the University of Kansas, pivoting from political science. Reading about the World War II monuments men, she said, inspired her to pursue cultural preservation in wartime.

Those World War II monuments men, she said, recovered priceless art collections the Nazis had looted across Europe. Adolf Hitler had been a frustrated artist, Wegener said, denied entry to his chosen art school in Vienna, and was bent on building his own museum full of stolen artworks.

Some major European museums, aiming to forestall looting, stashed important works away from museums. After Pearl Harbor was bombed in December 1941, the United States followed suit, sending some collections off to the Biltmore Estate in Asheville, North Carolina, while keeping major museums open as a refuge for weary civilians or military personnel.

The resulting Roberts Commission, named for its chairman, U.S. Supreme Court Justice Owen Roberts, was born. The resulting team included George Stout, a World War I veteran and U.S. Navy reservist who’d studied how bombing would affect museums and James Rorimer, who would eventually become director of the Metropolitan Museum of Art in New York.

“They’re not quite as handsome a bunch as George Clooney, Matt Damon and Cate Blanchett (the cinematic monuments men),” Wegener said, “but they were really important to saving the world’s cultural heritage.”

Wegener said the monuments men worked first to save art in Europe, sometimes, with the supreme Allied commander’s backing, telling armed forces personnel where not to strike, then to find art, sometimes digging into salt mines and searching remote warehouses.

When she returned from Bosnia in 1988, Wegener said she asked around and knocked on doors to learn more about the United States’ responsibilities under the Hague Convention for the Protection of Cultural Property in the Event of Armed Conflict, which was established in 1954 and evolved from iterations in 1899 and 1907.

“I was told, ‘You know, we did this during World War II, this really isn’t a thing we have to worry about anymore,” Wegener said, “so just worry about your own job.”

But then came the 2003 Iraq War, the fall of Baghdad and the looting of the Iraqi National Museum. Wegener watched in horror as it happened on television, and though she was supposed to deploy to Afghanistan, she wanted the Army to send her to Iraq.

So, again, Wegener called and queried Army brass. This time, a former commander she’d served under in Bosnia and who’d become the leader of Army civil affairs operations, heard her and granted her wish.

“He said, ‘Yes, we would really like you to come … please immediately pack your bags, do not pass ‘go,’ come to Fort Bragg (North Carolina), get processed, and we’re going to send you straight to Baghdad,” Wegener said.

Because the Iraqi National Museum had housed both its collection and the artifacts from looted regional museums, a vast trove of artifacts was lost or damaged during the 2003 war, Wegener said.

When she arrived in Baghdad, though she promised aid, Wegener said she was met with apprehension; Iraqis, already wary of Americans, weren’t sure she was trustworthy.

Eventually, though, she did work with them. As the University of Kansas’ alumni magazine reported in 2015, Wegener and her team restored the museum and staged a one-day exhibition of rescued art objects, including priceless treasures that had been stashed in Central Bank vaults that had flooded after a bombing. Despite their recovery efforts, though, 15,000 art objects were lost, Wegener said.

In October, the Army said it will begin training a new group of monuments men and women — reservist officers who will help preserve artifacts in war-torn countries and follow the 130-nation Hague Convention, which the United States finally joined in 2009.

As The New York Times and other news outlets have reported, the new Army unit will be based at the Army Civil Affairs and Psychological Operations Command at Fort Bragg, North Carolina, and will consist of museum directors, museum curators, archivists, archaeologists, conservators and new recruits with those qualifications. Wegener said the effort will help fulfill a Hague Convention’s provision that each of the treaty’s 130 nations will train specialists to help preserve cultural property and work with civilian groups safeguarding it.

Wegener and Scott DeJesse, an Army Reserve colonel and lecturer at the Army War College in Carlisle, Pennsylvania, will lead the U.S. Army’s new unit. Army officials told the Times they hope the new monuments team will include 25 experts, who, because they’re reservists, won’t be deployed full time but will go with military units as conflicts arise, perhaps to war zones. The new force will start training over five days next month at the Smithsonian Institution in Washington, D.C.

The Times reported the Army might waive the age 35 upper limit for joining the Army Reserves to let the unit better recruit experienced professionals. Wegener appealed to Army and U.S. Marine Corps-bound members of her Norwich audience to consider branching into the Civil Affairs Association and perhaps one day become heritage and civil affairs officers.

Wegener said her recruiting goal will be delivering a clear mission-based rationale for joining the new monuments team. Part of the mission, she suggested, will be countering nonstate looters and opportunists who will flout the Hague Convention’s ban on looting, pillaging and reprisal destruction of cultural sites.

“We’ll have to grow our own (force); we’ll have to train those folks,” Wegener said. “And we’ll look around in the Army and see who else might be interested in joining us for this task.

“I have given talks in the supply room of Army Reserve units,” she said, showing an overhead slide of her standing among stacks of boxes of meals ready to eat. “And I will talk to anyone who will listen. Even if it’s two guys cleaning their M-16s, I will talk to them about the Hague Convention while they do it.”