For Amanda Conway, a hundred reasons to celebrate 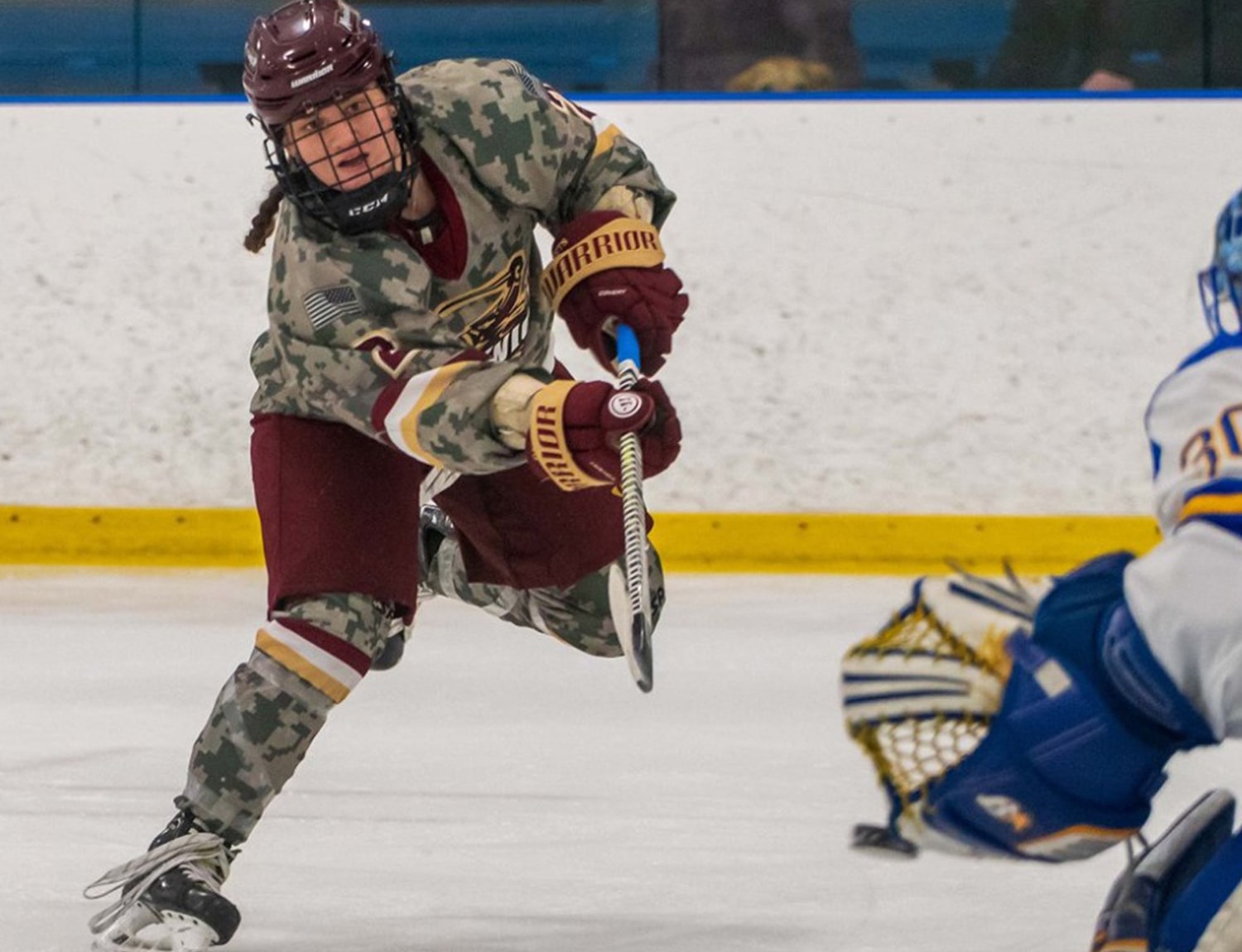 For Amanda Conway, it was a turn-of-the century mark moment. Two, actually.

With that goal, against New England College, Conway became only the seventh women’s hockey player to ever score 100 goals in NCAA Division III. The score was her second of the game in a 6-0 Cadets shutout.

“(Amanda has) done it all, she checks off all the boxes this year and she continues to do it and continues to pick up her teammates around her even in the biggest of moments.”Sophie Leclerc, Norwich women’s hockey coach

Remembering the play, Conway said she took a pass from Norwich defenseman Morgan Tefft at the midline, skated up the ice’s right side to the New England College blue line and pushed the puck, then herself, between two defenders.

“I saw the opening in the D (defense) and put the pucks through their sticks and split ’em,” she said.

She then scored, sparking a brief mini celebration. Norwich’s bench cheered and the feat was announced on the public address system, a classy touch by New England College for a visiting player’s milestone.

Everyone was excited, but Conway was humble. She called the goal nice, but not earth-shaking.

“It was exciting,” she said, “but it’s just like another goal, so I don’t really take it as anything other than that. It was exciting for the first couple of minutes.”

Conway, named the New England Hockey Conference women’s ice hockey Player of the Week for the seven days ended Sunday, said she knew the goal was her 100th, because her teammates knew and had reminded her regularly.

She credited those teammates for helping her continue to achieve.

“I’m not all about that,” Conway said of her goal count, adding that she hadn’t watched the highlight on film and probably wouldn’t for a long while. “I’d be nothing without the team so it’s hard for me to focus on myself. It’s obviously cool, but we’re moving on now.”

After adding two goals at home Friday against Salem State and two more against Johnson & Wales on Saturday in Providence, Rhode Island, Conway has 20 goals for the 2019-20 season.

“It’s incredible,” Leclerc said of Conway’s 100th goal. “She speaks the truth when she says that she doesn’t think it’s a big deal. And I think it just speaks to her teammates and how much they’re excited for her, because they were over the moon for her.

“You could feel the energy on the bench, just an extra cheer for her every time she was out there, they were just hoping that she would … reach that goal. They were just thrilled. It was a race to see who could pick up that game puck first.”

Hockey has been a lifelong passion for Conway, a psychology major who grew up in Methuen, Massachusetts, surrounded by a father, older sister and older brothers who all played. Conway tore up the record books before landing at Norwich, scoring 204 goals over four high school years for the Methuen/Tewksbury co-op girls’ hockey program, including a state-record 86 goals as a senior.

Leclerc said Conway’s calm comes from consistency,. And this season, as ever, she’s been consistently stellar. Whether the 100th goal came in the game it did, or the next, Leclerc was sure it would come.

“Her trajectory this year has been nothing but up,” Leclerc said. “I think just recognizing what this year is, this being her last year. How much that means to her. When I thought we’d seen the best of Amanda, there’s always been more, whether it’s effort, winning her battles, scoring goals for her team, setting up her teammates.

“She’s done it all, she checks off all the boxes this year,” Leclerc added, “and she continues to do it and continues to pick up her teammates around her even in the biggest of moments.”

Conway hopes for another big moment, and a goal that won’t fit into a net.

“It’s to win a national championship,” she said.

She’s done that once, in 2017-18, on her way to becoming U.S. College Hockey Online’s NCAA Division III MVP. The Cadets, who are a perfect 12-0 in the conference and 15-4-1 overall, will keep that achievement in sight when they play Middlebury on Tuesday at Kreitzberg Arena.

POSTSCRIPT: Amanda Conway became the first three-time Player of the Year in the 19-year history of the New England Hockey Conference on Feb. 20; she tied the Norwich's women’s hockey points record Feb. 15 in her team's final regular season game against Johnson & Wales and broke it Feb. 22 in the New England Hockey Conference quarterfinals against Salem State. ... She finished the 2019-20 season with  her second NCAA Division III scoring title, having netted 32 goals and 27 assists for 59 points.