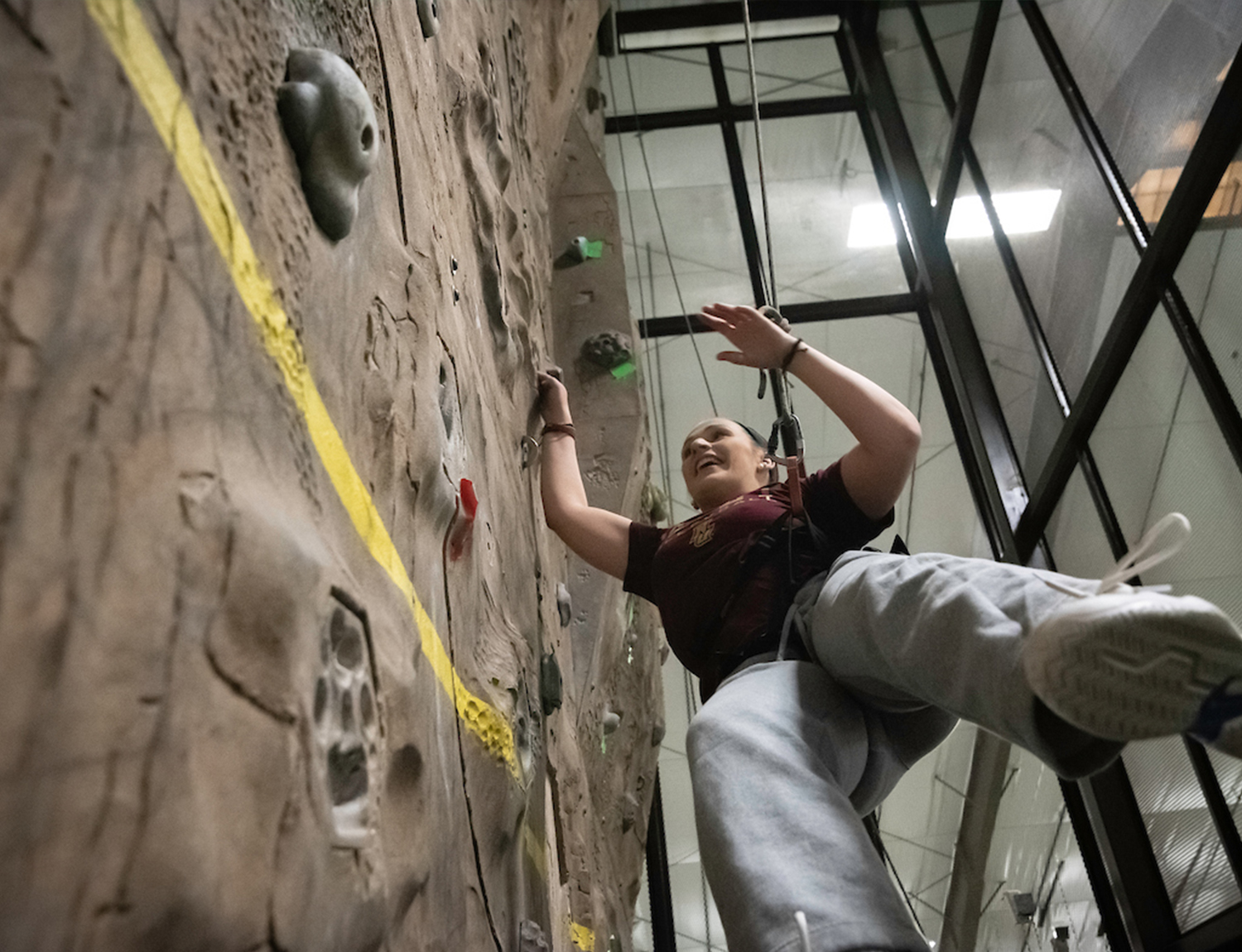 Never measure the height of generosity until you’ve reached the top.

On Saturday, the men’s lacrosse teams from Norwich and Castleton universities and the greater Norwich community will reach for new altitudes to honor Connor Roberts, a Norwich men’s lacrosse player who died in 2015 from a sudden, hypertrophic cardiomyopathy-triggered heart attack.

In concurrent 12-hour shifts from noon to midnight Saturday, Norwich and Castleton players will climb indoor rock walls in a fundraising competition. Castleton will climb at the Glenbrook Gym Rock Wall; Norwich will climb Hurley Rock Wall in Shapiro Fieldhouse. It’s the climb’s sixth year and the first with the 12-hour format; in previous years, the teams climbed around the clock for one full day. Also, this year, one climber from each university community must be on the wall and climbing throughout the competition.

“Connor was a hard-working player who embodied selflessness and was prepared to play in the big moments. Getting picked to wear No. 9 for me was both an honor and a challenge that I was thrilled to accept.”Peter Orlandella, Norwich men’s lacrosse player

The teams aim to raise $5,000 for the CJR Memorial Fund Ltd., which awards scholarships to high school students to pursue higher education and support youth sports programs in St. Albans, Vermont, where Roberts lived. The climbs have raised $25,000 to date, helping the foundation support a new cardiac unit in the hospital Connor was born in and later died in. The foundation also hopes to raise money for hypertrophic cardiomyopathy testing so other student-athletes can avoid Roberts’ fate, Norwich men’s lacrosse Associate Head Coach Nick Fischer said.

The universities’ climbing teams will compete in several subcategories, including overall participation (measured in total climbers), most vertical distance climbed, most feet climbed by one person and the oldest and youngest climbers to reach the climbing wall’s apex. The player with the most feet climbed will be honorary captain for the March 25 Norwich-Castleton men’s lacrosse game at Castleton. The team with the most points in the climb competition will get the game’s first possession.

After the game, to honor Roberts’ skills as a social bridge builder, the teams will meet for a meal.

Roberts, who played two lacrosse seasons (at midfielder) and one football season (at running back) for Norwich, was a 21-year-old junior when he died from hypertrophic cardiomyopathy, a disease in which the myocardium, or heart muscle, thickens abnormally, which can impede blood circulation.

Ben Roberts managed Castleton’s rock climbing wall in his college days and with friends of his and Connor’s hatched the idea for the climbathon, Fischer added.

Many current Norwich men’s lacrosse players have heard about Roberts, who studied construction management, as being kind, generous and driven. Peter Orlandella, a long-stick midfielder who was chosen by previous senior class players to wear Roberts’ No. 9 jersey, said the team continues to follow Roberts’ positive example.

“Connor was a hard-working player who embodied selflessness and was prepared to play in the big moments,” Orlandella, who this week was named co-captain of this year’s men’s lacrosse team, wrote in the 2019 annual report for Norwich’s Center for Civic Engagement. “Getting picked to wear No. 9 for me was both an honor and a challenge that I was thrilled to accept.

“Wearing No. 9 means always putting the team first no matter what, and bringing the team together in the hardest of times. Having the ability to carry on Connor’s legacy is not just the job of one player, but rather the entire Norwich lacrosse community, and we do it proudly.”

On Friday, Orlandella, who is a cybersecurity major and now a senior himself, said the team remembers Roberts before every game.

“We always pass his locker on our way out to the field and bring his helmet with us,” Orlandella said Friday. “He’s always with us … whenever we step on the field, we get a quick reminder of how lucky we are to be here and why we play.”

Brandon Milburn, a junior goalkeeper, said the memory of Roberts helps the team live in, and enjoy, the now.

“Above all else, it’s a constant reminder that any day could be your last,” Milburn said by email recently. “You can’t take anything for granted because all you have is the present moment. Connor embraced this mentality because of the way he lived; always being the life of the party and a constant presence in all he did.

“His legacy is a constant reminder that any practice, game, rep, or sprint could be my last. Life is too uncertain to not go 110% all the time.”

Fischer said Roberts played well himself and elevated his teammates. Roberts also connected people, Fischer said, bringing the football and lacrosse teams from Norwich and Castleton together, and bringing his fellow Norwich civilian students together with students from the Corps of Cadets.

“He really brought people together, and that’s what this event is all about, building the bridges within the Norwich community,” Fischer said. “Meeting people that you don’t know and getting them involved to really continue (Roberts’ legacy).”

All are welcome at the event to climb, donate, or to support other climbers during the Climb for Connor. Climbing experience isn’t necessary and all equipment is provided for free.

Orlandella, who’s on his fourth Climb for Connor, said he always meets interesting people during these competitions — Northfield residents, Norwich nonathletes or Norwich professors who come to climb or watch. He also sees inspiring things — young children who don the helmets and ropes and head up the wall.

“Such a great variety of people come down,” Orlandella said. “From the climb, I learned … how important family, friends and teammates are. You never know what can happen to people.”

A GoFundMe page has been set up for donations to this year’s event. The page can be accessed at https://www.norwich.edu/connor