Celebrating the Year of the Rat 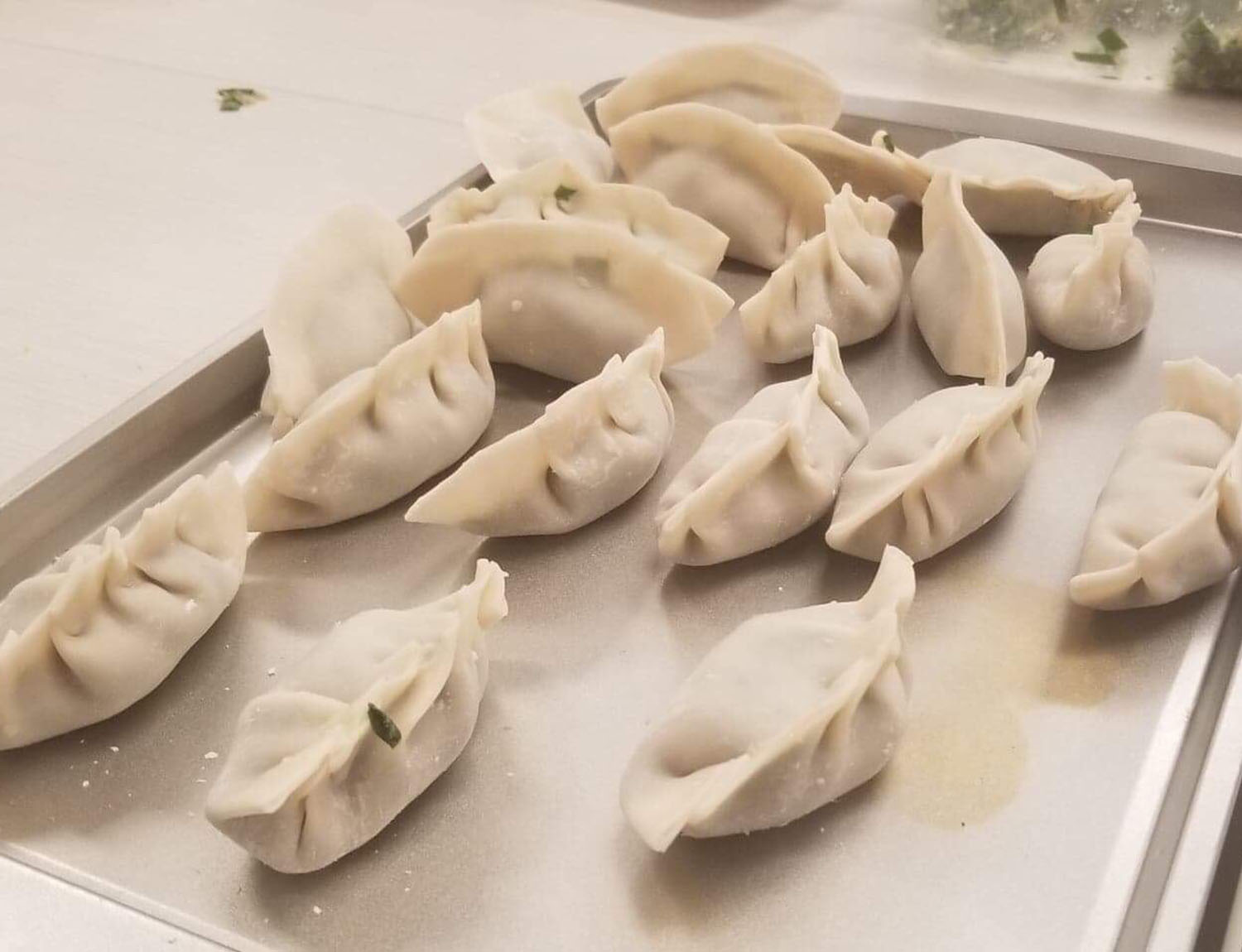 Learning can be tasty. Especially on Chinese New Year.

On Friday, the Language Resources Room, commonly used for Modern Languages study, activities and gatherings, teemed with students, who are studying Chinese at Norwich University and who began trickling in at 9 a.m. They came not to study, but to make and eat dumplings (饺子) to celebrate the Chinese New Year.

Saturday marked the start of the two-week Spring Festival (春节), which heralds the Chinese new lunar year — in 2020, the Year of the Rat. The Spring Festival started Jan. 25 and ends Feb. 9, the date of the next full moon. The festival’s end is often marked by a lantern festival.

“Dumpling,” (饺) Chinese language professor Lenny Hu said, is similar in pronunciation as “money,” (交子) and so symbolizes wealth. For this reason, he added, dumplings are usually shaped like ingots (元宝) — the silver currency used in the old times.

“How shall we celebrate the Spring Festival with our students this year?,” Lenny Hu, the Chinese language program’s interim director, asked Amy Huang, a professor from Taiwan and fellow Norwich Chinese language teacher. “Do you have any idea?”

She said, “I think we should do it differently this time.”

With a meal, she said. Instead of ordering food from the local Chinese restaurant and having a dinner party as usual, she suggested making and eating dumplings with students. That, she said, would be more culturally meaningful.

Hu said he liked the idea but hadn’t yet aced dumpling making. So, Huang reassured him.

“No worry,” she said. “I know how to make them and I can make good dumplings. My Mom used to own a restaurant and I helped in the kitchen in my spare time. It’s not hard at all.”

Instead of making the dumpling dough wraps from scratch and by hand, Huang said she’d buy premade wraps from the Chinese grocery store along with pork and chives for filling and bowls and chopsticks for serving. She said she’d make the filling at home, then, on Chinese New Year’s eve, she’d teach the students to wrap.

Hu would need only to boil water (simple) and ensure the dumplings didn’t stick to the pot’s bottom (simple with vigilance).

“When the dumplings are floating to the surface, add a little cold water into the pot,” Huang told Hu, “and then wait until the water boils again.”

Hu would then use a small ladle with holes, which Huang would supply, to fish out the finished dumplings.

On Friday, Chinese New Year’s Eve, the Language Resources Room filled with the fragrance of chives. Four big plastic boxes of filling and four packages of wraps lay on the tables; one box of filling had been opened. Students sat around the tables waiting hungrily, enjoying the scent of cooking. When they surveyed the fixings, the students asked about the chives in the filling and how to say “chive” in Mandarin.

Huang took a wrap from a package and used chopsticks to place filling onto the wrap’s middle. She then held the filled wrap and demonstrated how to seal it.

“First,” she said, “glue the two sides of the wrap together in the middle, and then, using your index fingers, push the left side toward the middle. Squeeze a little before sealing it. Then, do the same for the right side until all is tightly sealed. Make sure you seal your dumpling tightly.”

As the students watched and imitated the motions, Hu retrieved water from the washroom with a pitcher and poured it into a big metal pot. As Huang went to fetch something in her office, Hu put the pot on the stove and began telling the students about Chinese New Year and why Chinese people eat dumplings to celebrate.

“Dumpling,” (饺) Hu said, is similar in pronunciation as “money,” (交子) and so symbolizes wealth. For this reason, he added, dumplings are usually shaped like ingots (元宝) — the silver currency used in the old times.

Year of the Rat

“Laoshi,” asked a female student with some Chinese family background, “I want to know what animal is in the Chinese zodiac for the new year.”

Forbes online reported that the 12 signs derive from a myth in which the Jade Emperor in the sixth century B.C. had all earthly creatures race one another; the first 12 finishers earned Chinese zodiac signs. In many tellings of the tale, the rat finishes first after employing persuasion, or trickery, to cadge a ride on the ox’s head. Thus, the rat leads the zodiac’s animal cycle.

The next year of the rat is water rat (2032), then earth rat (2044), then wood rat (2056), fire rat (2068), and finally gold rat again (2080). Stems refer to heavenly stems, emphasizing the astrological influence from the stars; branches refer to earthly branches, emphasizing the influence from the earth. These two influences interact with each other, and the interaction determines someone’s characteristics or fate.

People born in the Year of the Gold Rat are thought to be talented, smart and self-aware, but also hot-tempered and jealous.

Out of the pot, into the knowledge

“Oops, the water is boiling,” Hu said. “Quickly, pass the plate to me!”

Huang, who’d returned without Hu’s noticing, said, “Here you are.”

The dumplings were poured smoothly from the plate into the pot. Less than 10 minutes later, they began floating to the surface. “Ready to eat,” Hu said, putting four dumplings in each small plastic bowl, pouring in a little specially concocted soy sauce and serving them to the students.

News of the dumplings, if not the aroma, had spread quickly, alerting Modern Languages Department Chairman David Ward. He arrived just as new dumplings had cooked and were ready to serve.

“So delicious! I want more!” one student said.

Another student agreed, saying. “I want more, too!”

News of the dumplings, if not the aroma, had spread quickly, alerting Modern Languages Department Chairman David Ward. He arrived just as new dumplings had cooked and were ready to serve.