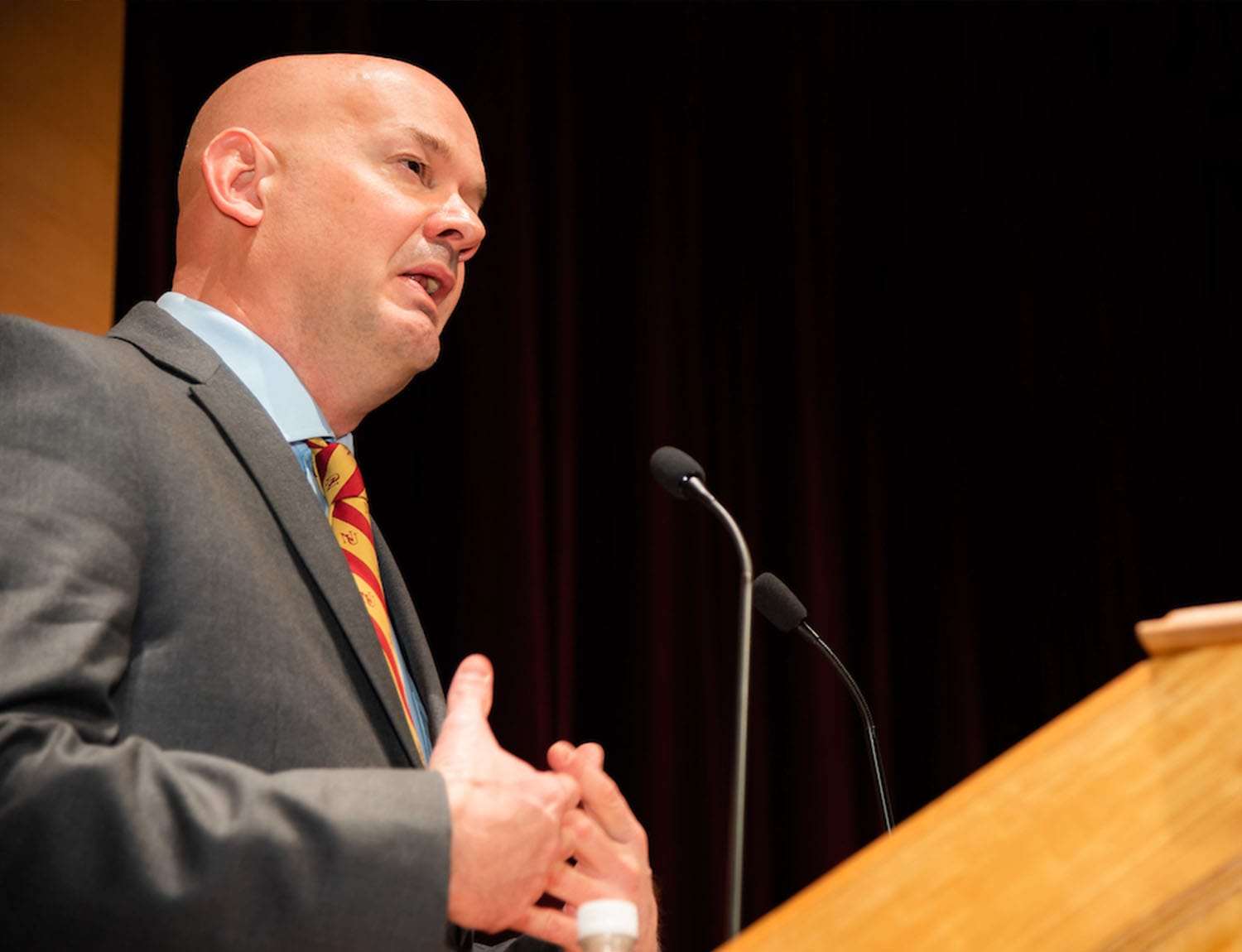 Board of Trustees Chairman Alan DeForest ’75 on Tuesday introduced Anarumo, who emerged after a nationwide search to be named as the successor to Richard W. Schneider, who will step down as president May 31 after 28 years at Norwich’s helm. Anarumo will take the post June 1.

Anarumo comes to Norwich from the U.S. Air Force Academy in Colorado Springs, Colorado, where he served as the Center for Character and Leadership Development’s director and permanent professor. His previous assignment was vice commander of the 39th Air Base Wing at Incirlik Air Base, Turkey, where he oversaw about 5,000 U.S. military, civilian and contractor personnel and directed the combat readiness of U.S. Air Force units at Incirlik and four geographically separated units in Turkey.

“Col. Anarumo emerged as the most capable candidate for this position,” DeForest said. “We are confident that we have selected an exceptional individual who will inspire our 200-year-old university to reach even greater levels of excellence.”Alan DeForest ’75, Board of Trustees chairman

He entered the Air Force in 1994 as the Distinguished Graduate of Air Force Reserve Officers’ Training Corps at Rutgers University.

The board met in San Francisco over the weekend to assess the finalists and make their choice. Anarumo signed his deal late Monday afternoon.

“Col. Anarumo emerged as the most capable candidate for this position,” DeForest said. “We are confident that we have selected an exceptional individual who will inspire our 200-year-old university to reach even greater levels of excellence.”

Anarumo said he was humbled and honored to have been chosen as president. He said he’d seen Norwich’s excellence in Norwich graduates he’s served with, over and under in the armed forces. What Norwich creates is remarkable, he said, spiritually collaborative and fiscally stable.

“There is no more healthy university out there … everyone involved with this school is doing remarkable things,” Anarumo said. “Please, you should feel very proud of what Norwich is and what you helped build. I am very, very honored to be joining the team.”

Anarumo said his family had enthusiastically backed his candidacy and was excited to come to Vermont and New England. Anarumo said his 15-year-old son Nick, the youngest of his four children, who still lives at home, was particularly keen on the idea.

“He’s the one who said, ‘Dad, of everything you can do, could we please try to get Norwich?,’” Anarumo said.

Building partnerships and widening networks will be themes of Norwich’s future, Anarumo suggested. First, he nodded to the other presidential search finalists, saying he had become their fan and would work to develop partnerships with them.

Then, in a question-and-answer session, Anarumo said he embraced internationalism and globalism. He said he sees study of Chinese and other foreign languages as a catalyst for forging overseas ties he wants Norwich to continue building.

And, echoing a point from his November town hall, Anarumo said he would work to strengthen ties on campus between the Corps of Cadets and civilian students. After the press conference, he mingled with students of all stripes, shaking hands and posing for cellphone selfies.

“Think about this, too, for current students and young alumni, the more civilian students we have, the wider the network of Norwich graduates across all industries and public sector areas,” he said. “If you can leverage those relationships, why would you not want that?”

Although the assembly was about Anarumo’s appointment, both he and DeForest hailed Schneider, who drew his own standing O, and 30 full seconds of sustained applause, for his leadership.

“With reasoned and thoughtful decision-making, and with unwavering integrity, he has overcome many obstacles during his 28 years of service,” DeForest said of Schneider. “And Norwich is unequivocally stronger as a result of his efforts and his accomplishments.”

See a letter from the chairman along with more information about President-elect Mark C. Anarumo here: norwich.edu/24.