Stumbling over history in Berlin 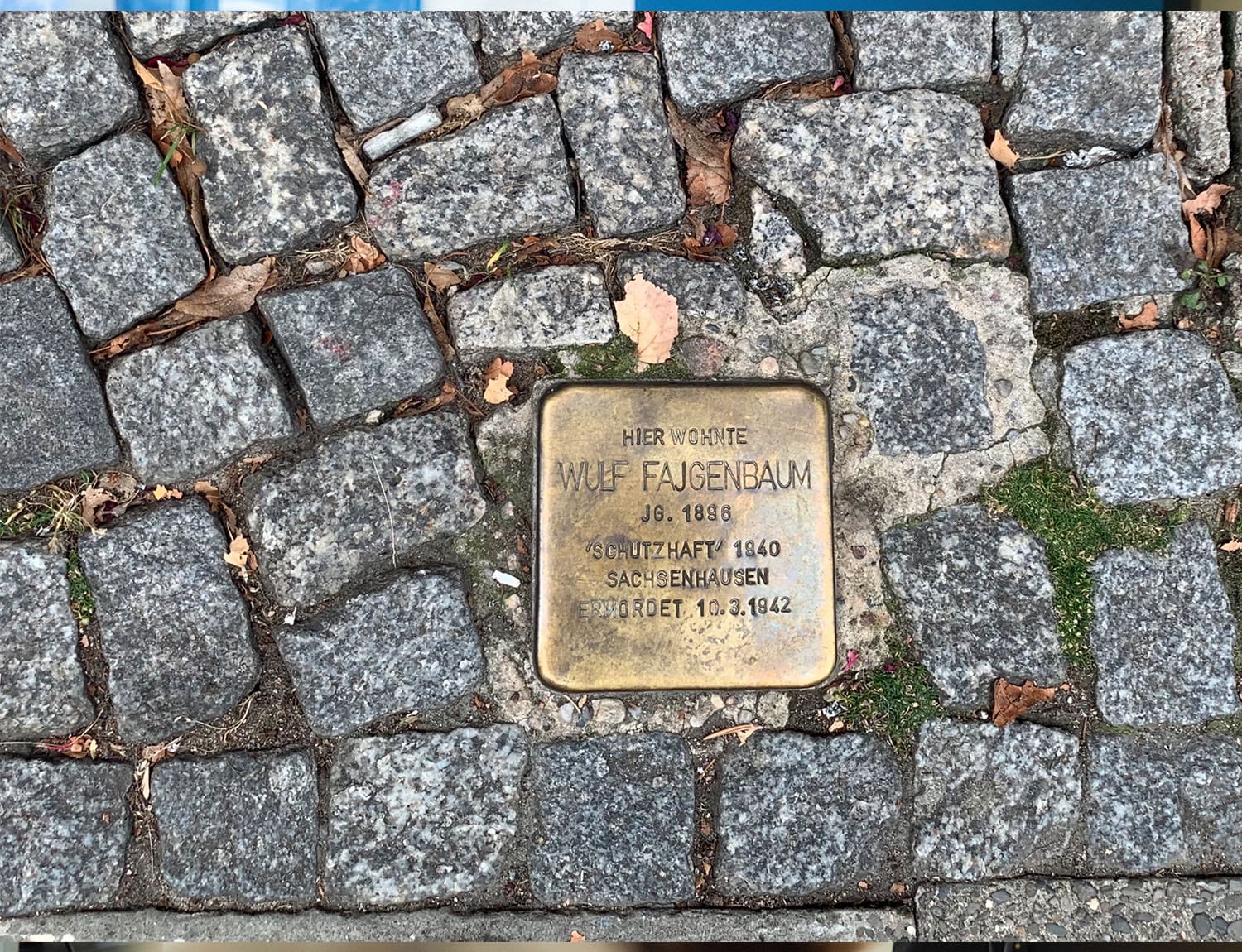 Eighty years ago, a man named Wulf Fajgenbaum lived in my apartment building in the Schöneberg neighborhood of west Berlin. Every morning in fall semester 2019, on my way to teach in the Norwich University CityLAB: Berlin program, I walked past a small bronze plaque embedded in the sidewalk next to my doorway that detailed the essentials of his life and death: born in 1896, taken into “protective custody” at Sachsenhausen concentration camp in 1940, murdered there on March, 10, 1942. Between my home and the the CityLAB classroom I passed dozens more plaques in the sidewalk, stark daily reminders of lives cut short at a tragic time in German history. The Germans call these markers Stolpernsteine, or “stumble stones.”

It is difficult to avoid stumbling over history in Berlin. Every street, park, and building has its own story to tell. A few blocks away from the Norwich CityLAB classroom, a painting on a residence’s stucco wall marks David Bowie’s Berlin apartment, where he lived from 1976 to 1978 and produced his extraordinary Berlin Trilogy. A bit further on, an abstract monument commemorates a synagogue burnt to the ground on that site during Kristallnacht in 1938.

Germans have been careful during Berlin’s recent building boom to avoid erasing important evidence of the past.

Germans have been careful during Berlin’s recent building boom to avoid erasing important evidence of the past. A distinct line of bricks indicating the location of the former Berlin Wall runs directly through the bustling shopping and entertainment complex of Potsdamer Platz, where one solitary, incongruous concrete guard tower still stands. Under the famous glass dome of the renovated Reichstag building where the German parliament sits, Russian graffiti from the 1945 Battle of Berlin has been left visible on the walls.

Atop the famous Brandenburg Gate, a bronze chariot drawn by four horses points down the broad avenue of Unter den Linden toward a newly reconstructed palace that represents the power and majesty of the Prussian monarchs who ruled Berlin in the 18th and 19th centuries. Berlin is a city that has been transformed in every generation, yet maintains a tangible link to even the most painful events of its past.

I can think of no more exciting location to study architecture, politics and history. For the past eight years, Norwich University has run a unique interdisciplinary program that uses the city as a lab for experiential, location-specific and problem-based learning. Students from different majors bring their backgrounds in various disciplines together to examine the city and its challenges from diverse points of view. When the opportunity arose for me to join Norwich students and our wonderful local Norwich faculty in Berlin for a semester, I could not resist.

I spent fall semester with students exploring Germany’s rich and complicated history of religious diversity — my research expertise — while exploring churches and other religious sites. I discovered to my delight that the same city that imprisoned Wulf Fajgenbaum 80 years ago in the name of racial and political purity now boasts a thriving Jewish klezmer music scene, a flourishing LGBTQ community, and a population where one out of three Berliners has an immigrant background. History tells us where we came from, but Berlin teaches us that history does not have to determine our destiny.

Emily Fisher Gray is an associate professor of history at Norwich University.