Check out this spectacular goal ... Orr else 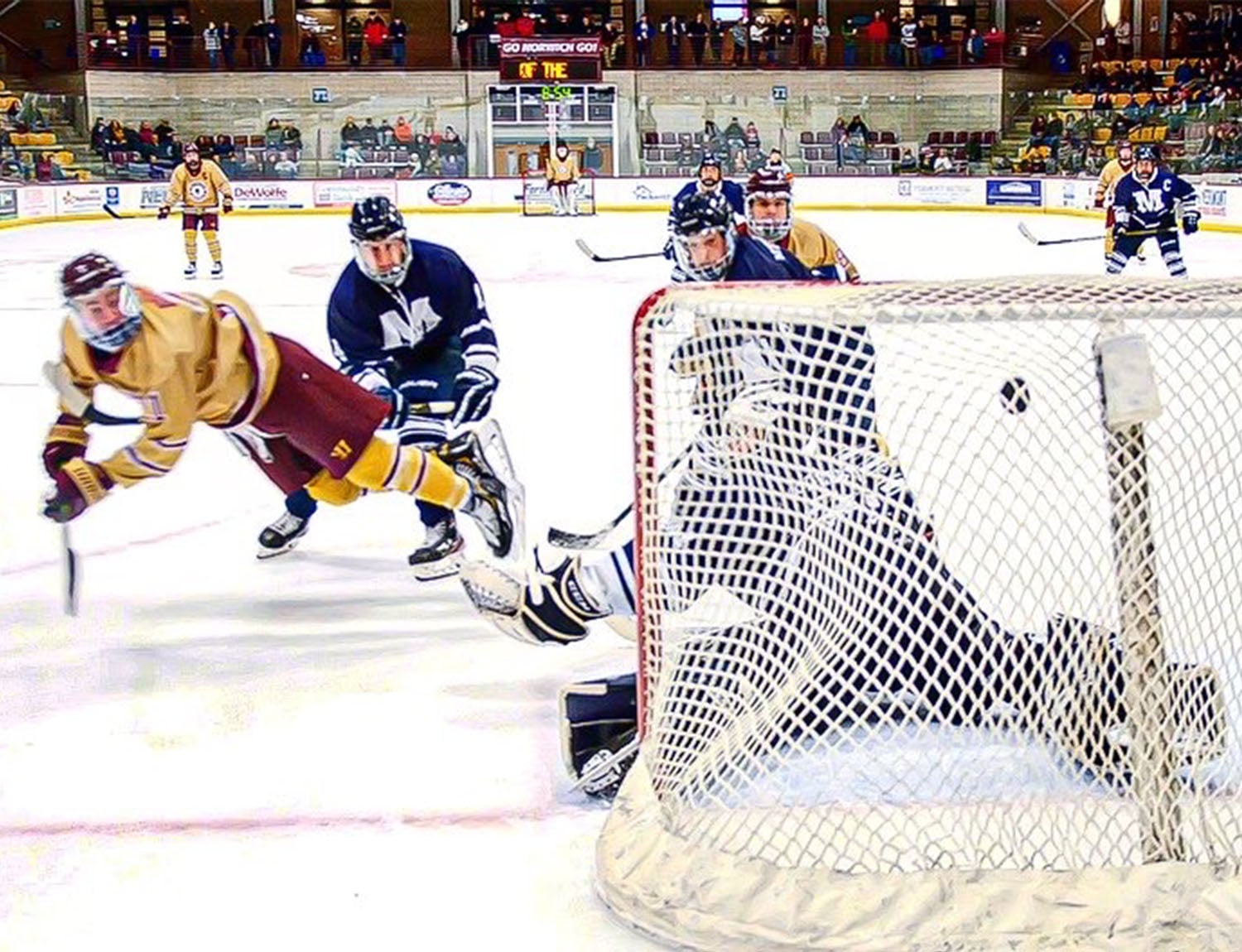 A goal light lit, a national highlight made.

Ryan Boucher’s goal at the 17:05 mark of the third period Monday night helped fuel Norwich’s 3-1 win over Vermont rival Middlebury. It was his sixth goal of the 2019-20 season. Although the goal thrilled the fans at Kreitzberg Arena, the nation got to share the joy, thanks to ESPN.

As the play developed, Boucher, a junior forward from Fitchburg, Massachusetts, displayed deft stickwork after taking a pass from junior defenseman Connor Swystun.

“I saw the goalie stretch out and had a good position so I lifted the puck over his pad. I had a lot of speed, and when I got up, I jumped onto the glass (dasherboards).”Ryan Boucher, Norwich men’s ice hockey forward

Boucher carried the puck through two Middlebury defenders, zipped down the left wing, cut in on goal and backhanded a shot past Panthers goalie Jake Horoho. Boucher’s momentum carried him forward enough that he seemed to fall down after depositing the puck.

“Connor Swystun had flipped the puck out of the defensive zone. When it landed, I had a lot of speed coming up the board and noticed it was still a bouncing puck when it reached the defenseman's feet,” Boucher wrote in an email, describing the play. “I swung my stick at the bouncing puck to get … on the inside of the defenseman. Once the puck settled, I knew I had a step on the defenseman (and) I could beat him to the net. I brought the puck there.

“The rest happened so fast,” he added. “I saw the goalie stretch out and had a good position so I lifted the puck over his pad. I had a lot of speed, and when I got up, I jumped onto the glass (dasherboards). I don't score goals like that too often anymore, and it was really exciting.”

“Ooooooooh man,” said Duncan, whom local audiences might know from her days at Boston sports broadcaster NESN. “Listen, he wanted to play foosball, but I think it’s best that he ended up playing hockey instead, because he looks very Bobby Orr-ish out there.”

That recap’s pop culture quips zipped by almost as quickly as the puck hit the net. Here’s a breakdown.

The foosball reference relates to Boucher’s surname, the same one as the protagonist in the 1998 movie “The Waterboy” had (He was Bobby Boucher and played by Adam Sandler). In the movie, Bobby Boucher’s mother, played by Oscar-winner Kathy Bates, famously says, “Foosball is for the devil.” Got that?

The second reference is to Bobby Orr, the Hockey Hall of Famer who scored a famous falling-down goal to help the Boston Bruins win the 1970 Stanley Cup. Some sports commentators have dubbed that score, against the St. Louis Blues, the “Orr soars” goal.