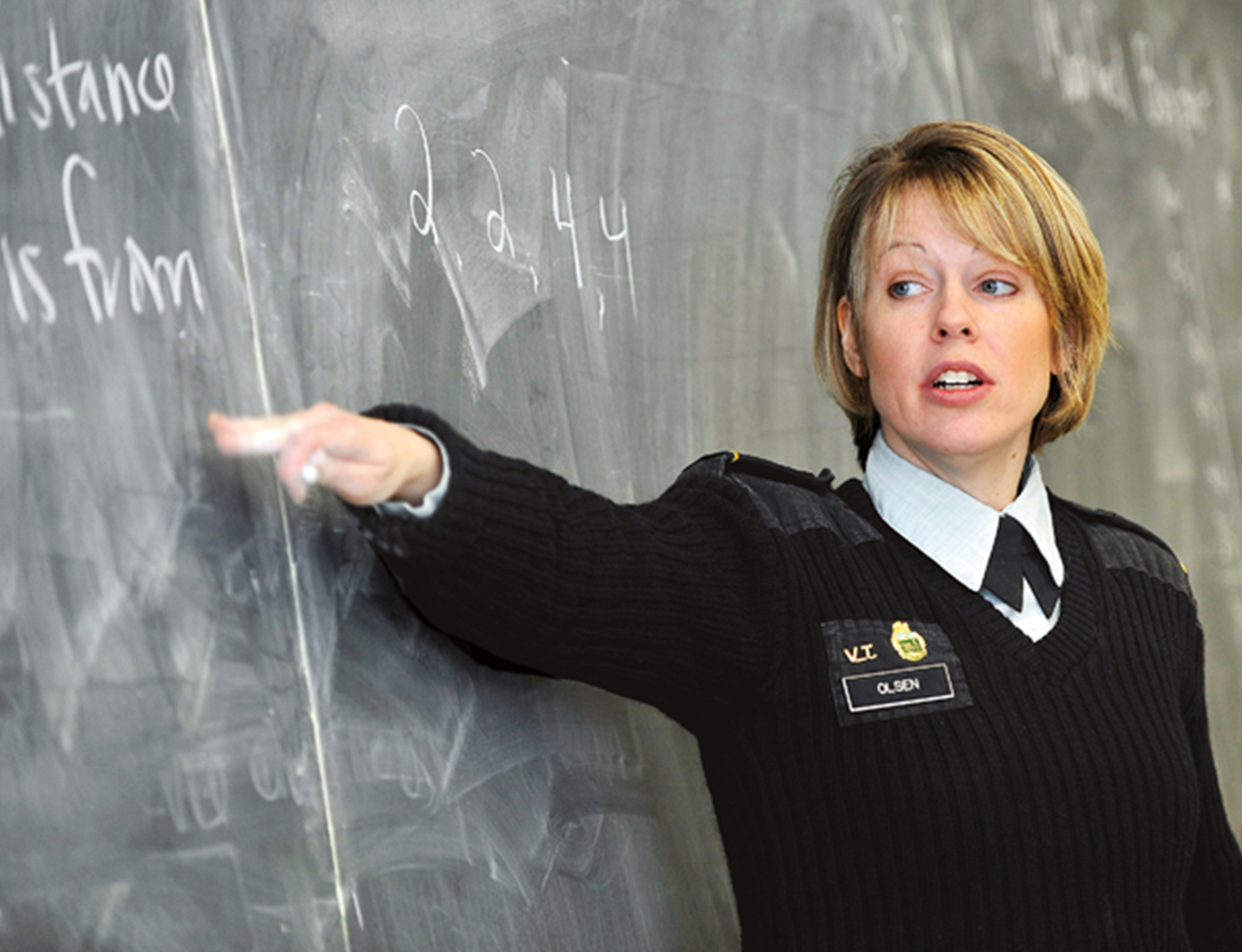 Norwich University’s commitment to education and excellence in science, technology, engineering and mathematics, or STEM, got a major boost this month when a team led by mathematics Professor Darlene Olsen landed a $650,000 grant from the National Science Foundation to increase STEM degree completion by low-income, high-achieving undergraduates.

“(The grant) boosts our reputation, not only regionally, but nationally, as an attractive choice for academically strong students.”Karen Hinkle, Norwich associate provost for research

McGinnis said the National Science Foundation money could be fate-altering for some prospective students. With the money, Pell Grant-eligible students in the College of Science and Mathematics majoring in STEM degree tracks will be eligible for an additional $10,000 scholarship grant. McGinnis said he suspects the money could drastically reduce, or eliminate, the tuition a scholar’s family must pay.

Karen Hinkle, a biology professor and Norwich’s associate provost for research, said the scholarship program, which will use educational research to expand Norwich’s STEM programs and bolster retention and recruitment, will heighten the university’s profile as a STEM leader.

“It boosts our reputation, not only regionally, but nationally, as an attractive choice for academically strong students,” she said. “It shines a light on our already strong STEM programs and showcases how we strive to support our students to succeed from the time they enter our doors to the time of graduation, and even beyond as the students (graduate and) enter the workforce.”

A boost to mentoring, research

Beyond math, Olsen said that by bolstering calculus offerings, the new program will help Norwich’s engineering majors, who must take the subject, and boost student outcomes, because the U.S. armed forces, businesses and nonprofits are eager to hire STEM graduates.

Most importantly, she said, the program will give some talented students, especially from underrepresented populations a chance to attend and succeed at college.

“I really want to make a difference in somebody’s life,” Olsen said. “If we can provide opportunities for low-income students to attend a great academic institution like Norwich, that’s awesome.”

The project team recognizes that students who enter college with less mathematics experience are less likely to graduate with STEM-discipline degrees. So, Norwich’s program will:

Landing the grant took two years, requiring a second application after the first fell short. (Norwich’s “I will try” motto became “I will try again.”) Olsen said working with the Vermont Genetics Network over the past decade and attending National Science Foundation S-STEM workshops (the first S stands for scholarships) sharpened her grant-writing chops. She has negotiated with the foundation since July, revising the proposal and budget several times, most recently over Thanksgiving break.

Many hands at Norwich and beyond, Olsen said, helped land the grant and will steer the new program.

Many hands at Norwich and beyond, Olsen said, helped land the grant and will steer the new program.

Latulippe will help with curriculum changes for the program’s calculus sequence and help train the student tutors. Hole will oversee the mentoring program and mentor the physics scholars. Professors Meghan Doczi (biology, neuroscience) and Ethan Guth (chemistry, biochemistry) will mentor the scholars in their disciplines.

“To get this has been a team effort,” Olsen said.

Olsen said she was thrilled when Mina Peshavaria, Norwich's sponsored-programs director, emailed to say the grant was landed and official. The news was especially nice, she said, given that, according to the foundation, only 17 percent to 19 percent of the grant proposals in a given year succeed.

“Mike McGinnis came up to my office when the funding was final,” Olsen said, “and we had a good (moment of) ‘Go, team, go.’”

Beyond the classroom, the foundation said, the S-STEM grants encourage collaboration among disciplines, institutions and faculty and partnership among educational institutions, business and community organizations, national labs and governments.