Community wins in this game of throws 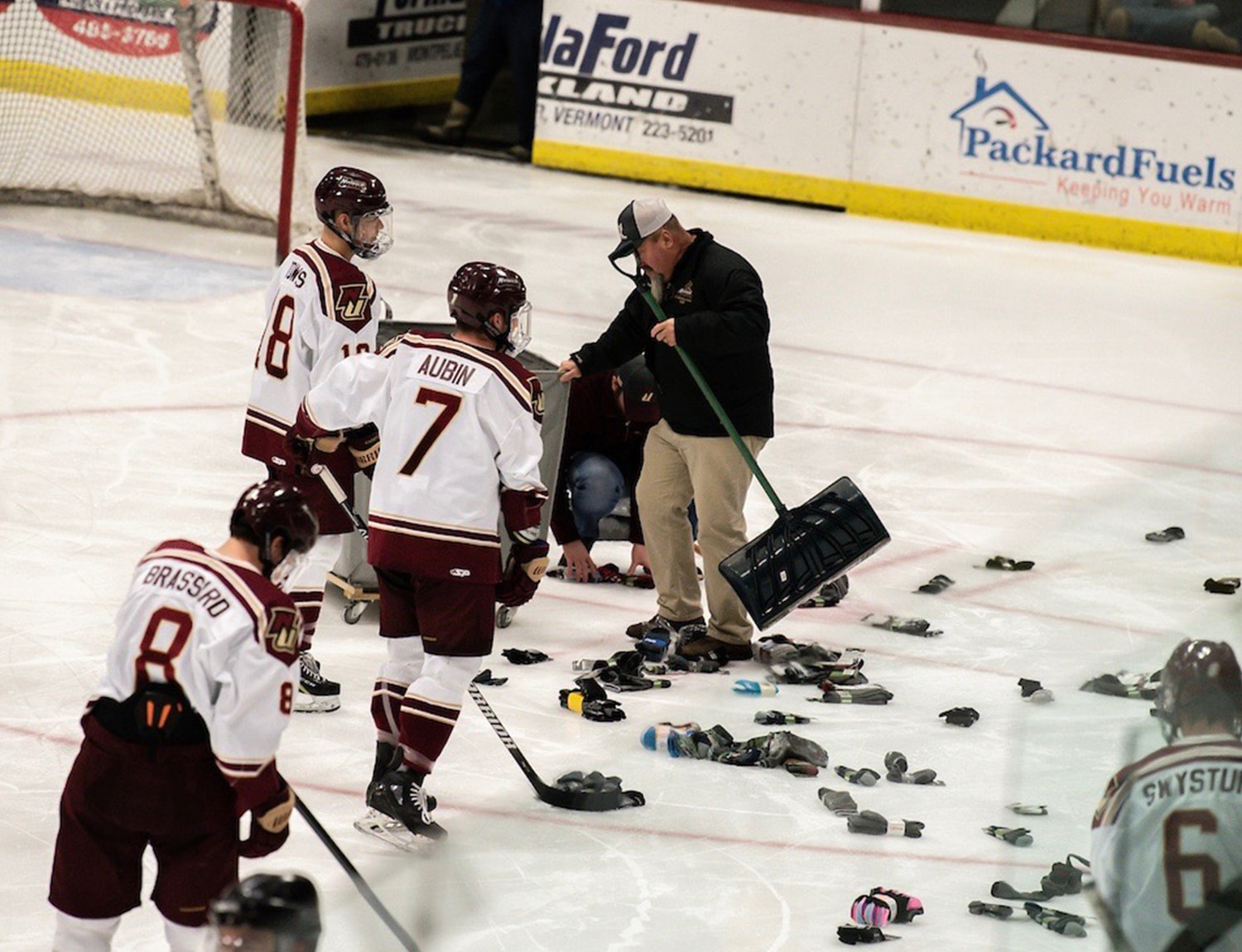 Felix Brassard sent the puck under the crossbar and into the net, sparking a powerful shower of socks and an aftershock of community goodwill.

A wrist shot at the third period’s 3:23 mark produced the 10th goal of the season for Brassard, a junior forward, and was a highlight of the second annual Darn Tough® Sock Toss on Dec. 6. The goal, assisted by defensemen Connor Swystun, a junior, and Matt Burchill, a senior, caused 1,500 pairs of new socks to rain onto Kreitzberg Arena’s ice for distribution to five central Vermont charities.

Announcer George Cuomo had the call on the video livestream that captured the goal and the toss. The clip was saved on the Norwich Athletics’ Instagram page.

“We really want to make sure that everybody is warm and has warm feet. Really good socks, like the Darn Tough socks, really make a difference because they let the feet stay warm even when they’re damp.”Judy Joy, Good Samaritan Haven

Cadets players scooped the socks into three gray plastic laundry carts, which had been wheeled onto the ice, for delivery to The Veterans' Place in Northfield, Good Samaritan Haven in Barre, Trinity United Methodist Church in Montpelier, and ReSource and the Committee on Temporary Shelter, aka COTS, both in Burlington.

“It’s really humbling to be able to come out here and help other people that definitely need it,” Burchill told WVNY. “Obviously, we have our ups and downs as a hockey team, we win and we lose but at the end of the day there’s more out there than hockey.”

Norwich men’s hockey coach Cam Ellsworth hatched the idea for the Sock Toss last season, his first leading the Cadets. Although the team had held toy drives and teddy bear tosses, Ellsworth wanted to start a new, distinctive tradition. He noted that socks are the most requested items at homeless shelters and matter particularly during Vermont’s frequently frigid winters.

“So many people in central Vermont need a helping hand,” Ellsworth told norwich.edu before the game, “and the Sock Toss is a great opportunity for us to grow as people and to see that there’s a need in the community that we’re in a position to address. It’s important for us to go help address that need in the small way we can.”

On Dec. 10, Tamira Martel, corporate and foundations relationship manager for the Committee on Temporary Shelter, told Norwich multimedia specialist Tanner Acebo that the Sock Toss delivery will help people who use the charity’s day station, a temporary shelter for single adults. The socks are particularly vital, she said, because people experiencing homelessness walk about 15,000 steps, or about 7 miles, every day traveling to and from places for services.

“There’s nothing worse than cold feet … they can just wreck your whole life,” Joy said. “We really want to make sure that everybody is warm and has warm feet. Really good socks, like the Darn Tough socks, really make a difference because they let the feet stay warm even when they’re damp.”

“It shows the value of this community,” Kim, whose organization serves 80 to 100 people at its weekly community lunch, said. “It’s about teamwork.”