We saved the dates 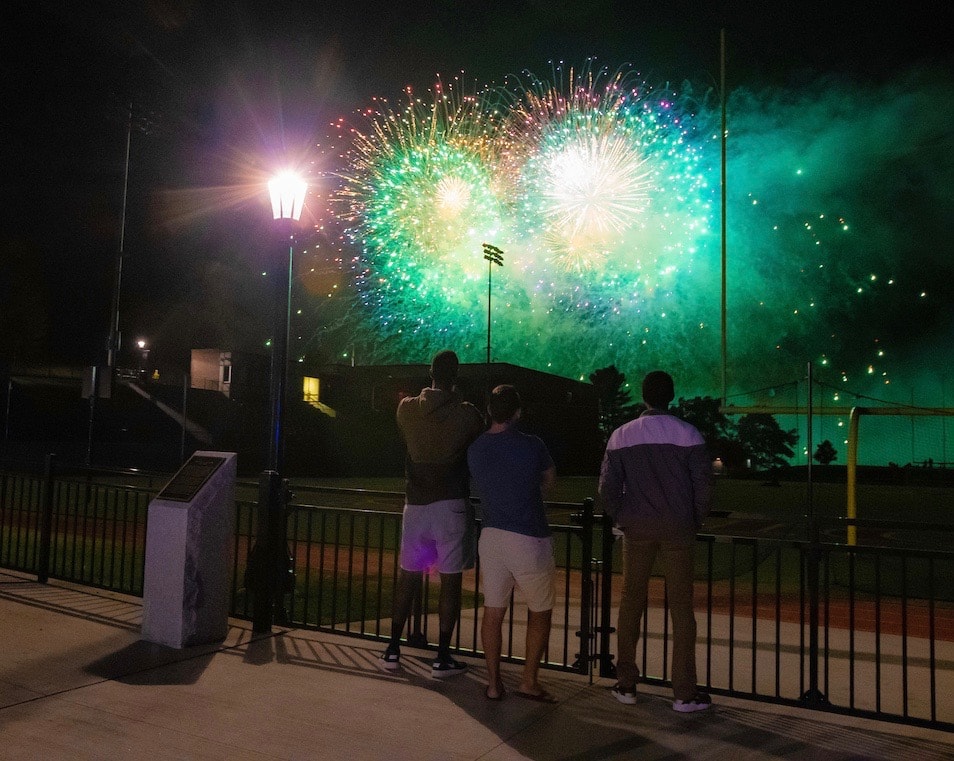 Walk with us through some memorable Norwich University moments from 2019

As 2019 ends and we head home to recharge our creative batteries, the Office of Communications and norwich.edu web team is looking back at some of the year’s memorable highlights.

This list is hardly complete; we probably have as many stories and successes as there are students, faculty and staff on campus or online. But as front-row observers, these are things that stuck with us.

We’re glad you were along for the five-year bicentennial journey that culminated in 2019 and grateful that you’ll be along as 2020 comes and Norwich continues its third century of service to the nation.

1. Norwich celebrates its bicentennial: A calendar full of festivities included a day of special events at the Vermont State House, in Northfield and in our hometown of Norwich, the shattering our $100 million goal for our and several galas to celebrate the university’s milestone. We also unveiled the final building renovation Forging the Future enabled, a remade, technology-equipped Dewey Hall.

2. Homecoming: Six thousand alums, a record count, visited campus to celebrate our 200th year. A weekend full of ceremony and celebration included the official unveiling of the Bicentennial Stairs with visits by many of the influential and important Norwich alumni and friends and the families of those whose names were etched in Vermont granite. There was also the unveiling of a Class of 2019-donated class ring statue, christened by a tap from President Richard W. Schneider, and a massive Alumni Parade, during which $118 million in money raised was announced.

Here are other observations, listed more or less chronologically:

3. Cybersecurity at the 2019 College Football Playoff National Championship: Students in Norwich’s Bachelor of Science in Cybersecurity program joined the Santa Clara Police Department, Allied Telesis and Respond Software, in supporting cybersecurity at the Jan. 7 game between Clemson University and the University of Alabama at Levi’s® Stadium  in Santa Clara, California. Norwich’s students deployed Security Onion, an open-source software solution, to collect and analyze security events from hardware sensors that they designed, configured and managed and installed across the stadium network

5. Norwich Expeditions launches: Norwich offered a new way to study abroad with its NU Expeditions program, which includes opportunities in Strasbourg, France; CityLAB Berlin in Germany; St. Croix, U.S. Virgin Islands, Chengdu, China. Norwich students roomed with one another, engaged in leadership and planning opportunities, and took courses to satisfy their majors. There are also stateside Expeditions offered in Washington, D.C., and Denver, where students studied “away” in the fall and completed internships while studying online.

6. Norwich ProSM debuts: Norwich’s continuing education platform, launched in January, providing certificate programs in an online, flexible learning environment and custom education partnerships with organizations. Norwich Pro, which features corporate compliance and security expert Larry Potts and public speaker and team management expert Bruce Gay as instructors, among many others, started with its military history certificate program; 2020 will bring additional programs in Project Management Professional and Certified Associate in Project Management exam prep, leadership, supply chain, strategic communications, public works and cybercrime. The first cohort of students is finding great value in Norwich Pro’s programs. One wrote, “I want to commend Norwich for the idea behind Norwich Pro. It was an enjoyable course, not merely an educational one. Norwich Pro is allowing me to continue adding to my background and I am immensely grateful.”

7. Research opportunities: The end of the year featured the annual Students to Scholars Symposium in which 17 students shared research ideas and connected with faculty to further them. Earlier in the year, Norwich’s School of Nursing, collaborating with the University’s College of Graduate and Continuing Studies, launched a new online bachelor’s degree completion program, (RN to Bachelor of Science in Nursing), designed for licensed registered nurses who want to pursue their degree while balancing work-life responsibilities. Norwich also launched a new accelerated Bachelor of Science in Nursing, where any student who already has a bachelor’s degree (in any discipline) can begin on campus in the summer and then be considered a junior in the fall, essentially earning a Bachelor of Science in Nursing in just more than two years.

8. Esports keeps going, and growing: Esports, competitive video gaming, continues to gain popularity and Norwich’s gaming opportunities are growing accordingly. The university is offering scholarships to attract top talent to play on its varsity team, which competes against other collegiate teams for cash prizes. Over the summer, a new weeklong esports camp opened on campus, drawing 20 game enthusiasts from around the country.

9. Legacy March marks a decade: Three milestones crossed in the fall when the university turned 200 years old and the Legacy March, a 50-mile march from Norwich, Vermont, to Northfield, Vermont, turned 10, as did the recipient of its fundraising, The Veterans’ Place Inc. Fifty cadets made this year’s march, which re-creates the historical movement in 1866 that brought the university to Northfield from Norwich after a disastrous fire on the original campus. A Veterans Day weekend concert by native Vermonter and country music star complemented the march. Together, the march and concert raised $16,000, march organizer Col. Michael Kelly said, all to benefit The Veterans’ Place, a Northfield transition home and support center for homeless veterans.

10. Value judgment: A Georgetown University study “A First Try at ROI” ranked Norwich in the top tier of U.S. colleges for delivering value. The study, released in mid-November, put Norwich in the top 7 percent of 4,529 schools ranked for best net present value at 30 and 40 years post enrollment. University officials said the news was welcome but not surprising, given a career-oriented curriculum. A Georgetown researcher said majors for lucrative, quick-to-hire careers, including cybersecurity, engineering and nursing, help Norwich deliver long-term value.

11. Richard W. Schneider begins farewell: President Richard W. Schneider will retire on May 31 after 28 years as Norwich University’s president. As the fall semester unfolded, he referred to some presidential “lasts” — last convocation, last Dog River Run with the new rooks, last Homecoming weekend. The university will name a presidential successor after the January board of trustees meeting. But the university community will continue to celebrate Schneider until commencement and his own “graduation” — as the civilian student class of 2020 did when giving him a Norwich ring (at their Junior Ring Ceremony in April 2019) to wear at Homecoming.