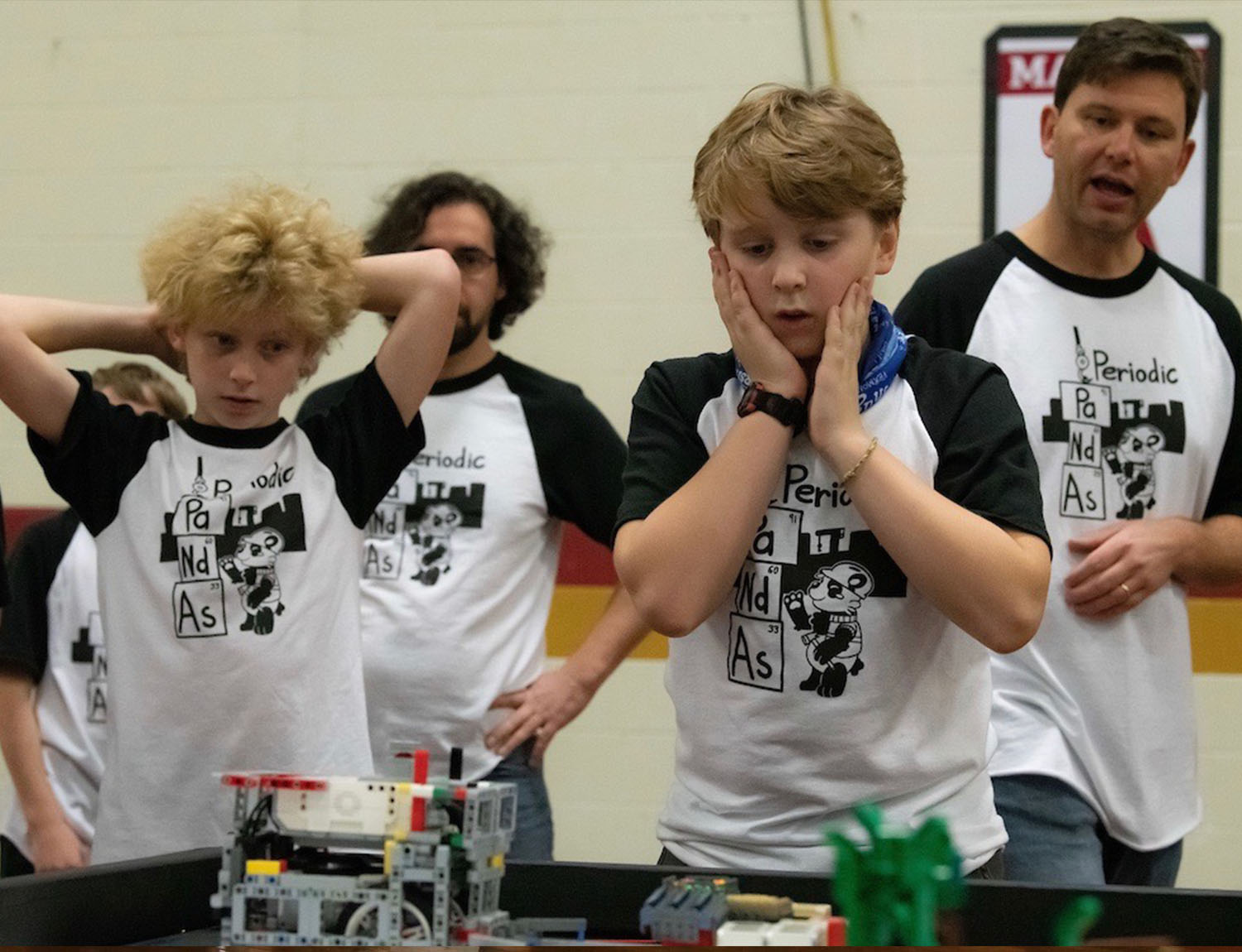 The daylong competition ran Dec. 8 at Shapiro Fieldhouse and drew 26 teams of up to 10 children 9 to 14 years old and at least two adult coaches from around Vermont. The teams researched a real-world scientific issue and designed and built original robots in response. Also, seven Junior FIRST LEGO League teams of elementary school-aged students exhibited work related to the challenge at an unofficial showcase.

In all, 255 children participated. One hundred volunteers, including many Norwich faculty, staff members and students, helped run the event; 500 spectators attended.

“With all the enthusiastic young roboticists, and the small army of can-do volunteers from across the Norwich community, the future is bright.”David Feinauer, Norwich Electrical and Computer Engineering professor and FIRST® LEGO® League Vermont State Championship organizer

Norwich University established Vermont’s regional FIRST LEGO League affiliate in 2013, hosting regional qualifiers. The university has hosted the state championship since 2015. (The FIRST in FIRST LEGO stands for For Inspiration and Recognition of Science and Technology.)

“The (FIRST LEGO League) Vermont State Championship was an extraordinary day marking the culmination of the … (FIRST LEGO League) season for many young thinkers, makers, and doers,” Norwich engineering professor David Feinauer, who coordinated the state championship, said in an email. “The camaraderie among the event participants is powerful. Every year, we are excited to see the thoughtful, creative, community-focused projects of these students, and we are thrilled to make a space and place for an event that so many tell us is the highlight of their season.

“With all the enthusiastic young roboticists, and the small army of can-do volunteers from across the Norwich community, the future is bright,” he added.

As the FIRST LEGO League’s website states the competition, which aims to inspire children in science and technology, was founded by Segway scooter inventor Dean Kamen.

The teams demonstrated their robots in 2½ minute intervals on the 2-square-meter playing field, aiming to score as many points as they could. The robot had to act autonomously, governed by their programming; remote controls were banned.

“On the board, we have all these missions set up,” said Max Drapa, a 12-year-old member of the Westford School’s Periodic Pandas team told Burlington’s WCAX-TV, Channel 3, before the competition. “Some of them are pushing these buildings into circles, some of them are flipping elevators.”

Mark Drapa, one of the team's coaches and Max's father, said the robotics exercise prompted the children to think critically under pressure.

“The children ... really have to think about the mechanical design, programming,” he said. … It‘s amazing work.”

This year’s FIRST LEGO theme was City Shapers. Teams used LEGO MINDSTORMS®, a hardware and software platform, to develop programmable robots based on LEGO’s famous plastic building blocks. The participants were challenged to use modern-day tools and observations about how cities and buildings grow and change to plan FIRST City, a sustainable future metropolis.

“As FIRST City booms and changes for its future existence,” a descriptor video on the FIRST LEGO website said, “your mission is to be a force for change to create solutions to help transportation and new buildings to make our home last.”

Feinauer said because Vermont is so small, teams from its state championship didn’t automatically advance to the 2020 FIRST LEGO World Festival, April 15 to 18 in Houston and April 29 to May 2 in Detroit. Although Vermont teams have received wild card festival slots in past years, none have come so far this year, although some teams are on a waiting list.

Many Vermont teams will have a party to mark the FIRST LEGO season’s end and then participate in other science, technology, engineering and mathematics challenges in the spring, Feinauer said. Others will disband and reconstitute in August when the FIRST LEGO League season resumes.

The Vermont championship’s Global Innovation Award winner, 40677 ArborBots of  Rutland, will write a description of their project and send it for further judging, Feinauer said. If the project passes the vetting, the ArborBots will become one of 20 teams named Innovation Ambassadors and advance to the 10th annual Global Innovation Award from June 7 to 9, 2020, at Walt Disney Co.’s Epcot Center in Tampa, Florida.

“My generation is leaving your generation with many challenges,” Lyons said. “We are using too many resources without considering the impact of using those resources on your generation. It is very important that you all change that problem.

“The most important thing you can do is dream big, think big,” he added. “Take on the big challenges of your day, build infrastructure and cities that are sustainable. Solve people’s problems. That’s what engineers and scientists are supposed to do.”

Lyons said he was involved in cool projects abroad — designing bridges in South America, hospitals in Africa, power plants in Europe and in the United States — the Central Artery Project, aka the Big Dig, and the Green Line Extension Project in Boston. The Central Artery Project created a 10-lane superhighway under the city; the Green Line project aims to expand transit services. Both projects will improve traffic flow and air quality, he said.

“What big projects do you wish to undertake? What will you do to shape our world to make it more sustainable? How will you leave your fingerprints on this very delicate and fragile world?”William F. Lyons Jr. ’90

Dreaming big can change the world, Lyons told the audience.

He asked, “What big projects do you wish to undertake? What will you do to shape our world to make it more sustainable? How will you leave your fingerprints on this very delicate and fragile world?”

Expanding the event’s science and technology theme, the Center for Global Resilience and Security and the Dog River Conservancy displayed models exploring the Dog River, which originates in Roxbury, Vermont, and flows north approximately 20 miles, through Northfield and Berlin, before entering the Winooski River in Montpelier.

Meanwhile, Professor Simon Pearish and his ecology students set up a stream table that let young visitors move the sand and water around and consider flooding and ways to prevent it.

Here are this year’s results:

Strategy and innovation: 37145 Order of the Brick, South Burlington