The road to ribbons 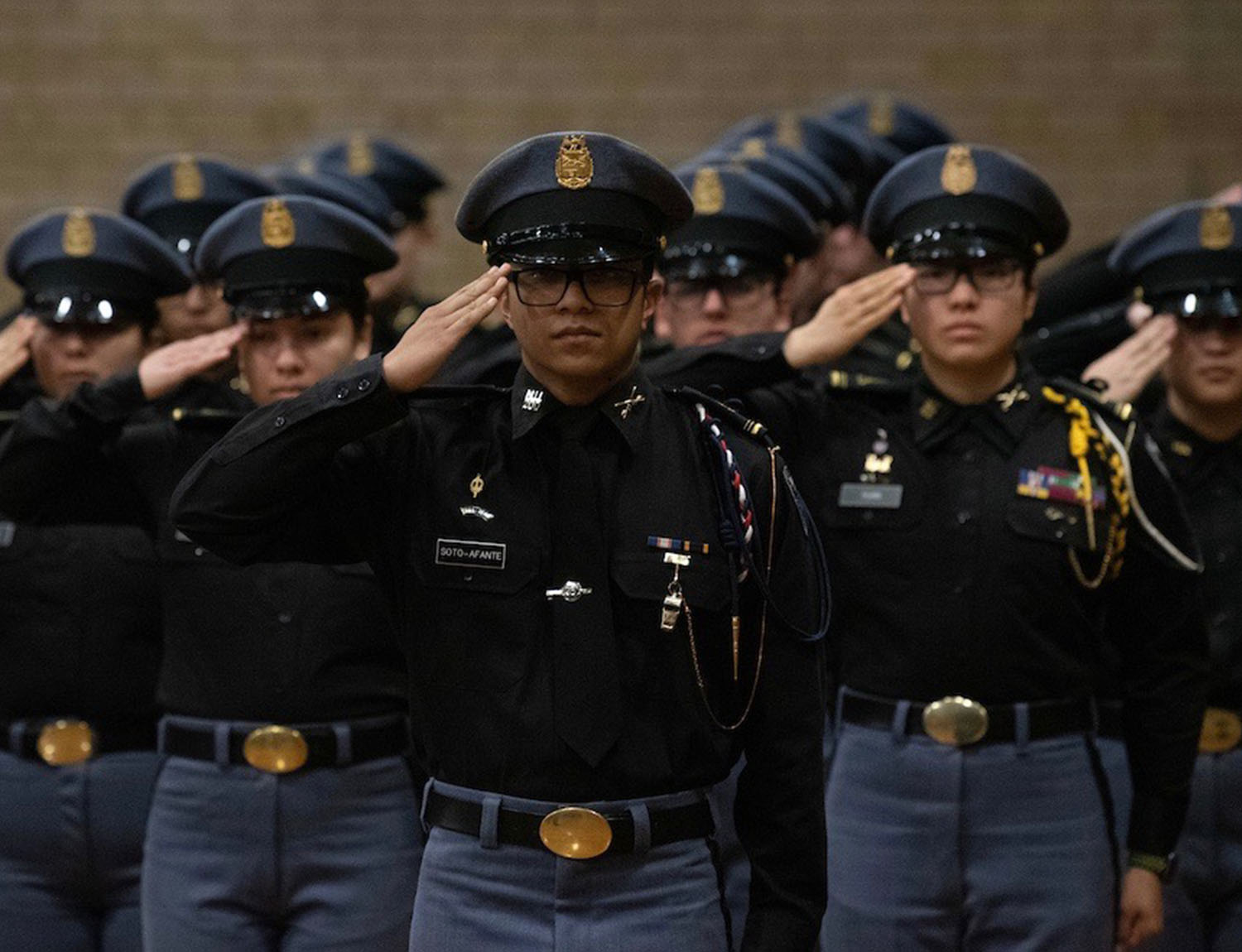 With Corps of Cadets members and public watching, 2023 rook class is recognized for achieving training goals

Weeks of early wake-ups, pushups and pop-ups — midcorridor rook knowledge quizzes based on the Cadet Handbook — all led to a step up — a celebratory moment at Plumley Armory.

2023’s rook class, first-year Norwich University Corps of Cadets members, arrived in central Vermont in late August from points all over the map. The group of about 480 students had run and walked and marched, splashing through the Dog River, trudging through falling leaves and lately passing through clouds of snow.

The rooks, by tradition, had been recognized as Corps privates in a Corps-only ceremony late the previous night. (Timing of these internal recognitions has varied over the years, sometimes coming as early as before Thanksgiving dates and as late as early spring).

“Take care of each other, support each other, because we all face challenges in different ways. … And remember what you do here at Norwich becomes the foundation for the rest of your life.”Col. Albie Lewis ’73

This year, for the first time, the rooks were also recognized publicly, ushered into the ceremony with a blast of brass from the Regimental Band, a flash of flags from the Color Guard and a pinning of Initial Entry Training ribbons.

President Richard W. Schneider, fittingly, spoke to the assembly first. This rook class rite will be his last as he heads toward retirement after 27 years at Norwich’s helm. He said the public rook recognition is a new tradition that will carry forward.

Col. Michael Titus, the commandant of cadets, said the timing for the private and public ceremonies may change, perhaps moving earlier or later, maybe to the start of the spring semester.

Rooks who don’t meet rookdom’s requirements won’t be held out of the public recognition ceremony, Titus said, but will go through remedial training afterward to satisfy the requirements and earn their private rank and ribbons.

At the ceremony, Schneider, as he did when he welcomed the rooks in August,  nodded to parents who’d left their daughters and sons in the university’s care. He said the rooks were standing taller, striving to be strong academically, physically and ethically and to do what’s right when no one is looking.

“It’s all about persevering in the face of adversity,” Schneider said, echoing Norwich’s trademark “I will try” ethos. “That means they don’t quit. This gang hasn’t quit. And I want to commend you all for making such strong students who don’t quit.”

“This is probably the hardest thing they have ever done in their life,” Schneider said turning to the students. “But it won’t be the hardest thing you will ever do, cadets. There are many things coming that will be harder. And if you don’t believe me, go talk to your mom and dad.”

Albie Lewis, a retired longtime Vermont National Guard colonel, spoke next, representing Norwich’s Class of 1973, the guardian class to the Class of 2023 rooks. He welcomed the new cadets to a brother and sisterhood that transcends the university and generations.

Lewis reminded the new cadets to savor the moment they’re in and the moments to come.

“Cherish the years here at Norwich. Soon enough, you’ll think back on your fellow cadets, the good memories,” he said. “Take care of each other, support each other, because we all face challenges in different ways. … And remember what you do here at Norwich becomes the foundation for the rest of your life.”

Ethan Hagstrom, the Corps of Cadets’ regimental commander who will graduate in May, invited the assembled parents, families and friends to take pride in their children, who’d become the first cadets of the university’s third century. He asked for the parents’ help in nudging the new cadets toward excellence.

“We want to push them to be dynamic and adaptive,” Hagstrom said. “Applying all the things they’ve learned over the past few months here to their future careers at Norwich and their future careers in the military, business world, private sector or wherever else their paths may lead.”

George said bonding with his platoon, especially in early morning training, had clarified the power of practice. To memorize copious rook knowledge, George said he’d drilled constantly, sometimes mumbling to himself. Peter Sandri said he’d written facts on notecards to boost his recollection and used coffee and pushups to shake off weariness.

Fred Sandri said he was proud of both new cadets, having seen them strengthen in mind and body. He said his son’s penchant for helping others had intensified on campus.

Kendall White, a psychology major, said she felt honored and satisfied to earn the ribbon and prove to herself that she can adapt; in high school, early rising was anathema. Getting through the running was the biggest challenge, she said; sometimes it seemed her legs couldn’t carry her any further. But they did.

With every stride, every mile, she kept her goal in mind. Cadet status awaited at the finish line.

Kendall’s father, Billy White, said, “It’s amazing. I’m excited about her growth here at Norwich. … This is another step in her career. She’s very focused and I look forward to her success going forward.”

Construction management major Ian Mace said he had gotten himself back into the classroom groove after taking a couple of years off after high school and cut more than two minutes off his 2-mile running time (14:40 from 17 minutes) with his Corps and Army ROTC training. He said he will be glad to cut corners walking again — able to zig and zag instead of walking in L-shaped, right-angle patterns.

“This feels something like when I became an Eagle Scout,” Mace said of his ribbon-receiving moment. “It’s definitely a sense of accomplishment.”

Christine Libbey, whose major is so far undeclared, said she’s enjoyed the challenge of managing her chockablock-full schedule, which includes Air Force ROTC and Norwich Corps activities, a work-study job and her courses.

Libbey said rookdom had been initially intimidating, both on videos she’d watched pre-enrollment and in person. But she said she was happy to have earned her ribbon and to be recognized with fellow rooks, who had consistently cheered one another on.

“You’re straight out of high school and you’re not really sure who you are yet and … people are screaming at you and you don’t know what’s going on,” she said, recalling her Norwich arrival. “But the community and the family here takes those levels of scariness away.

“Our hard work, the things that we’ve done and gone through, that’s brought us to this moment,” she added, “and this moment is the peak of how awesome everything at Norwich can be.”

Libbey said she’ll go home for the winter break with a newly extended family to celebrate.

“I have a lot more family members … family members to me means my rook brothers and sisters,” she said. “So, I have those people … to reach out to and talk to.