Covering all the ankles 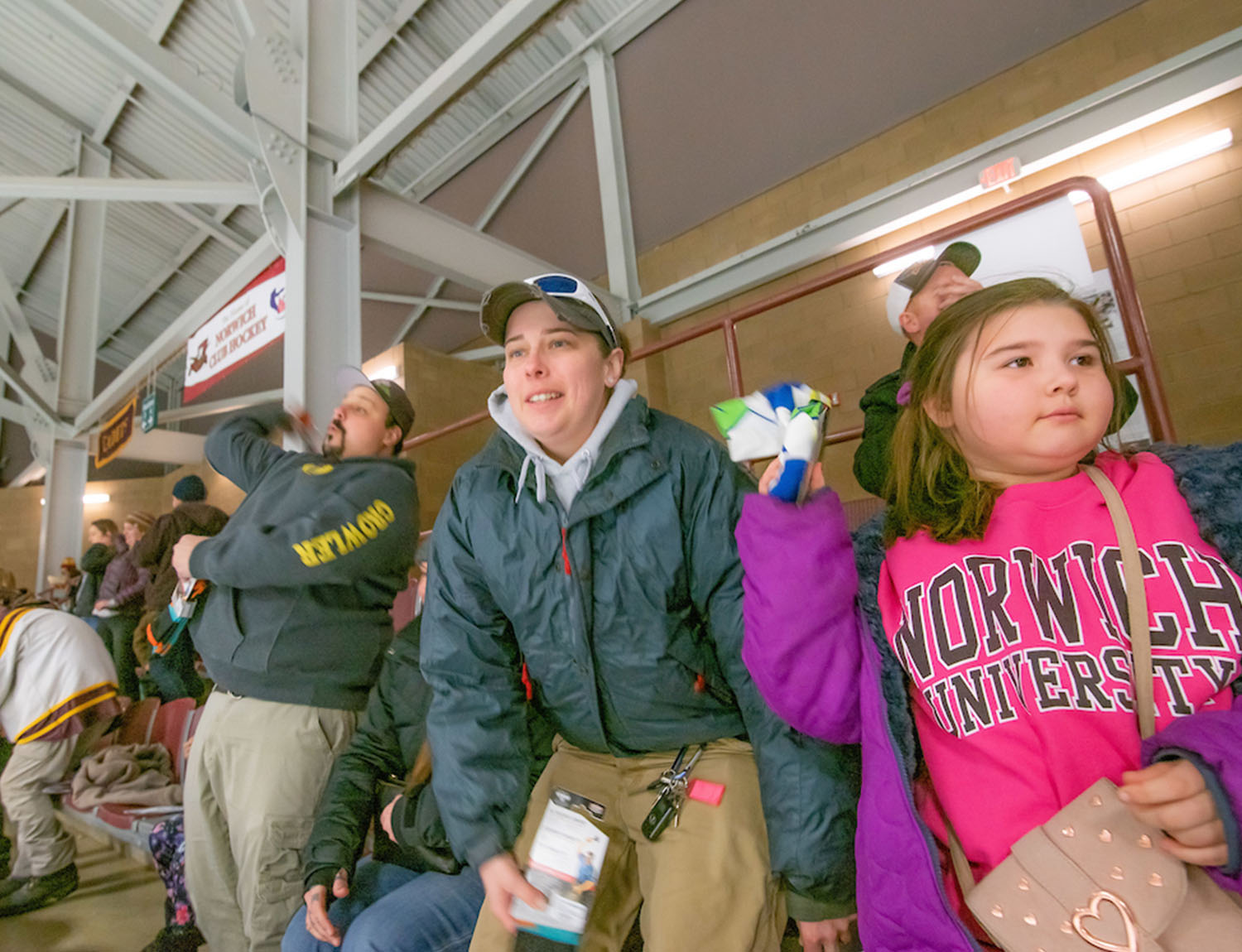 Call it going toe to toe … to toes. On Friday, Norwich’s men’s hockey team will work to defeat Castleton on the ice and fight community hardship with its second Sock Toss.

For the Sock Toss, Darn Tough, a sock maker operating from Cabot Hosiery Mills in Northfield, is donating 1,500 pairs of socks for the team to distribute to five local charities: The Veterans Place in Northfield, Good Samaritan Haven in Barre, Trinity United Methodist Church in Montpelier; and ReSource and the Committee on Temporary Shelter, both in Burlington.

Fans will be invited to toss their socks after the Cadets score their first goal. If the goal doesn’t come, the toss will follow the game.

The Cadets encourage fans attending Friday’s 7 p.m. game to bring new socks to throw on the Kreitzberg Arena ice for the hockey team to collect and distribute to the charities. Fans will be invited to toss their socks after the Cadets score their first goal. If the goal doesn’t come, the toss will follow the game. No socks will be sold on site.

Norwich, ranked first in the national Division III men’s hockey rankings, will enter Friday’s game undefeated in the New England Hockey Conference at 6-0-0 and 8-1-0 overall. Norwich’s only loss was to Middlebury College in overtime during the 22nd annual PrimeLink Great Northern ShootOut over Thanksgiving weekend.

Norwich Head Hockey Coach Cam Ellsworth hatched the idea for the Sock Toss last season, his first leading the Cadets. Although the team had held toy drives and teddy bear tosses, Ellsworth wanted to start a new, distinctive tradition. He noted that socks are the most requested items at homeless shelters and matter particularly in Vermont’s frequently frigid winters.

Besides helping the community, Ellsworth said the Sock Toss works as a team builder for players, letting them work together and count their blessings.

“This is an important event for all of us to grow and understand how fortunate we are to be here and studying and representing a great university,” he said. “So many people in central Vermont need a helping hand, and the Sock Toss is a great opportunity for us to grow as people and to see that there’s a need in the community that we’re in a position to address. It’s important for us to go help address that need in the small way we can.”

Ellsworth said he accompanied the players in distributing socks and called the charity visits eye-opening.

“We didn’t come close to meeting the need that’s there,” he said.

The Vermont Coalition to End Homelessness’ Point in Time Count report estimated that 1,089 Vermonters were homeless in 2019. Fifty-eight percent of the people counted as homeless used shelters, the study said; 12 percent entered transitional housing; 10 percent were unsheltered. From 2018 to 2019, the report estimated, the number of unsheltered people rose almost 37 percent.

“This is an important event for all of us to grow and understand how fortunate we are to be here and studying and representing a great university.”Cam Ellsworth, Norwich University men’s hockey coach

The company is adding staff as it expands. This past spring, the company hired a chief technology officer and human resources director and, as Footwear News reported, named its first sustainability manager.

“Darn Tough remains committed to giving back to the community that has helped shape our success — this community is made up of our families and friends,” Cabot said in a statement. “By partnering with the Norwich University ice hockey teams in our hometown of Northfield, we can keep our neighbors in need warmer this season.”

Norwich men’s hockey team captain TJ Dockery, a senior defenseman from Lockport, New York, said it was exciting to see the socks collect on the ice earlier this year and rewarding to get them to people who need them.

“It was cool because we knew the socks were going to a great cause,” he said by email. “At all (the charities), the (players) saw firsthand how much the men and women of our community appreciated the socks.”

Dockery, who is majoring in business management and accounting, said visiting The Veterans Place was particularly special because the team could return some of the support the residents give when they attend the Cadets’ home hockey games as the university’s guest.

“For the team, this is important because it makes us more connected to the community that supports us and it helps our fans and supporters put names with a face,” Dockery said. “From these trips, I learned that most of the people that were at these places just wanted to talk; they wanted someone to talk to. Us having socks was just an added bonus.”

Veterans’ Place Administrative Manager Karen Boyce said the veterans appreciate both the Sock Toss and the socks, which offer warmth, comfort and support for feet sometimes hampered by poor circulation or other maladies. She said the veterans particularly like the Darn Tough socks, because they’re made locally and because some veterans have worked for the company.

Boyce said she hopes to arrange a dinner during Norwich’s winter recess at which the hockey players can deliver the socks and eat with the veterans.

“The guys absolutely love getting the socks and meeting with the team,” she said. “The Sock Toss is just a great community event. We couldn’t do all we do without the community.”

Here’s a look at the charities the Sock Toss will benefit: