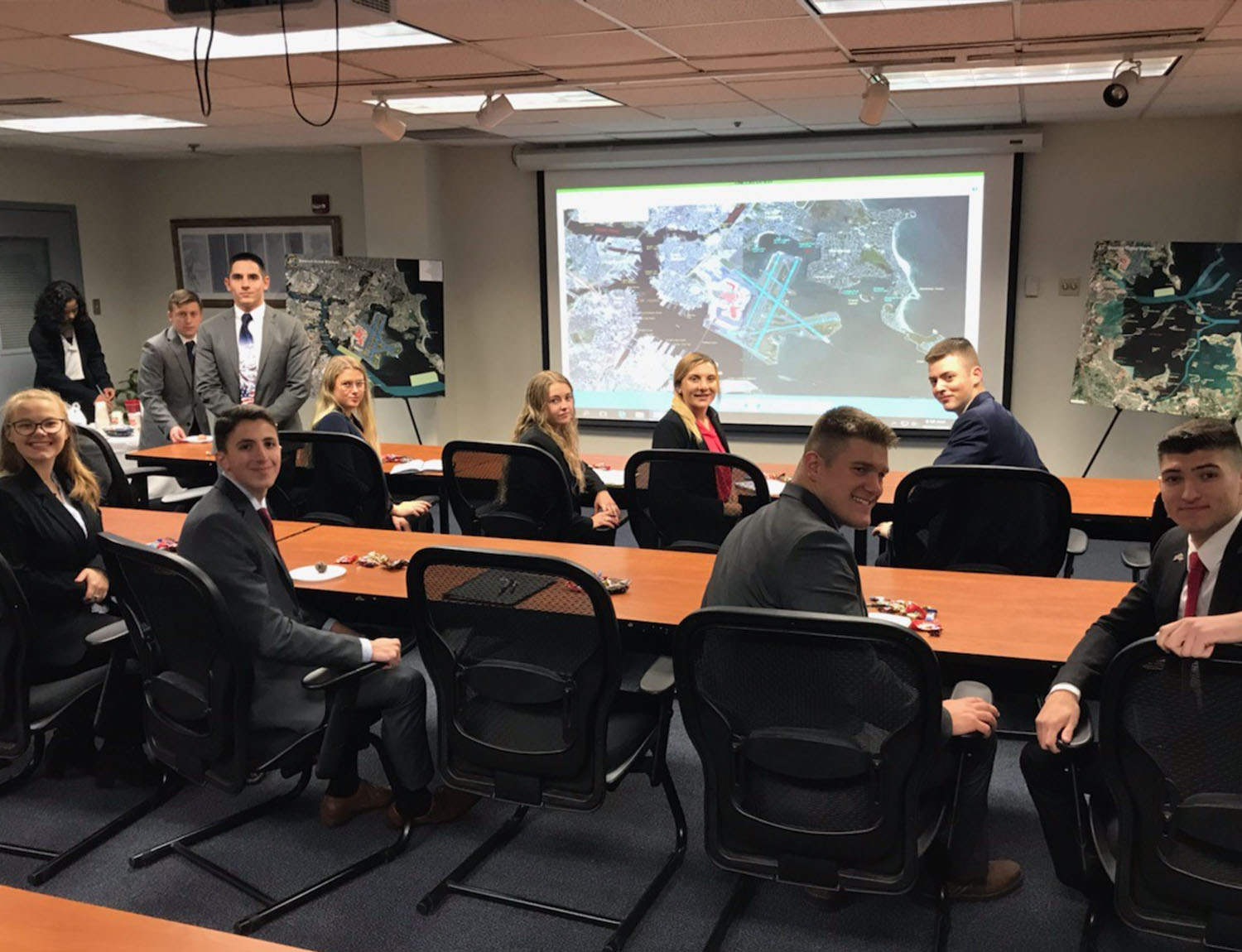 After the tempest came the afterthoughts.

A dozen Norwich University students recently visited Boston for the second iteration of Boston Policy Week, an experience started in 2018. The group participated in a hurricane disaster mitigation simulation, visited five federal agencies and networked with alumni. The aim was delivering Norwich’s signature experiential learning in a real-life setting.

It was the second annual iteration for Boston Policy Week, which the Peace and War Center and the College of Liberal Arts sponsored.

Here are the experiences as described by some of the participating students, edited for length and clarity.

Boston Policy Week was one of the most insightful and interesting experiences I have had at Norwich. Throughout the three days we spent in Boston, I learned invaluable lessons that will influence the rest of my life.

Monday, we visited agencies that helped inform us on our simulation that would take place two days later. Tuesday, we visited the Drug Enforcement Agency and FBI, which gave me insight into what I might want to do in my career after the military. I know now that I want to join the federal government and work for a “three-letter” agency.

“Not only are our alumni successful, they really care about Norwich and are willing to give back, as they showed during both the simulation and the alumni dinner.”Sam Carlson, criminal justice major

Wednesday, we did a full simulation, which was challenging and informative.

Before visiting Boston, we were told that our simulation would be some kind of state or national threat. We learned a few days before leaving we would be reacting to a hurricane hitting New England.

The Coast Guard taught us about the incident command system that helps all branches of government communicate during national emergencies. Then, we went to the Homeland Security Department, where we learned about the key pieces of infrastructure.

The DEA and the FBI gave us lots of information about what they do and how they do it. They gave their information to us straight, and I appreciated that. The Federal Emergency Management Agency taught us how it reacts to hurricanes.

These were not only cool experiences that would inform us for our simulation, they showed how strong our alumni network is. Not only are our alumni successful, they really care about Norwich and are willing to give back, as they showed during both the simulation and the alumni dinner. They kept saying they wish they had this experience when they were students. That stuck with me.

I forged wonderful connections at I would not have made without the Peace and War Center that might lead to jobs. The DEA, for example, told us it was hiring. Having the alumni connection to an agency like that gives students a foot in the door.

This trip, which would not have been possible without alumni who care about Norwich and that connection, is what makes Norwich special.

If I could I give one word to summarize my Boston Policy Week experience it would be “perspective.” Over three days, we visited agencies that gave us different perspectives on how to handle crises — emergencies, drugs, or even cyberattacks. Each agency challenged us to look at things from a different perspective.

Having different roles for the simulation made us see different perspectives. Acting as the attorney general really got me out of my comfort zone. Being a civilian on campus, it was interesting to look at things from a military point of view.

Visiting the Federal Emergency Management Agency and its bunker were key to our understanding the hurricane simulation. Having the second day of not worrying about the simulation visiting Drug Enforcement Agency and FBI really helped us learn broader lessons.

“Before this trip, I had never even heard of the Cybersecurity and Infrastructure Security Agency; and now I hope to work for it one day.”KristieAnn Desilvio, criminal justice major

The alumni dinner was another highlight. As freshmen, we don’t realize how important it is to make connections with alumni, but I know better as a senior. The alumni were once us, wondering where they would end up. Even though none of the alumni there were in my career field, it was cool to get to know them and create new connections.

Before this trip, I had never even heard of the Cybersecurity and Infrastructure Security Agency; and now I hope to work for it one day. I have even chosen to change the topic of my research paper in my IA class to research and learn more about CISA and its benefits the Homeland Security Department.

As I look toward May and my graduation, I will use a lot of the advice I received on this trip. I feel like rather than being so focused on going federal, the alumni helped me realize I want to start in more of a community setting and work my way up.

The agencies helped me realize every level of law enforcement works together — it could local, state, or federal, but one way or another, they will cross paths. The connections I made with alumni at the agencies and outside over three days really show the impact that these opportunities have on students.

Boston Policy Week was an exciting trip that I was incredibly blessed to go on.

I had really never studied state and local politics and how a federal agency works cohesively with other entities. Going to these agencies to work and talk with representatives taught me how vital Homeland Security is and how the agency’s policies affect us daily. Because we don’t have a Coast Guard detachment at Norwich, visiting the Coast Guard’s office was interesting. The agency works on the homefront and overseas. Its mission is dynamic and fluid; it can work alone or with other agencies in Homeland Security.

“Being able to talk one on one with these alumni and learn about their success in the work world made me realize that I could find a job in the government after the military.”Alexander Hutz, studies in war and peace major

The dinner with alumni was a massive component of the Boston Policy Week experience. Being able to talk one on one with these alumni and learn about their success in the work world made me realize that I could find a job in the government after the military. I liked talking to Norwich graduates who worked in law enforcement, Homeland Security and the Justice Department. They explained how the work we learn in the classroom will impact us in the real world.

During the hurricane simulation, I used my class knowledge and the knowledge these experts gave us to create policies to govern a state. Guidance from Norwich alumni who work for the Federal Emergency Management Agency made it easy to realize how vital the agency is to national security and how federal employees work with state and local agencies to ensure stability in all of government.

The group project was good, and I liked that every role we were given played an essential role in a national emergency. We all learned from one another, seeing how different government agencies work together.

I loved this project. I hope it continues for years to come.

My simulation role as a local emergency management director challenged me to think of the crisis on a personal level and pushed me out of my comfort zone. I was able to think smaller — understanding how to get resources to specific communities — rather than thinking only broadly about an entire state or country.

“My simulation role as a local emergency management director challenged me to think of the crisis on a personal level and pushed me out of my comfort zone.”Faith Privett, political science major

This trip helped us understand how each agency executes its role within its constitutional jurisdiction. For example, we learned what laws the Coast Guard can enforce and where in the world it can enforce them, which is different from the rest of the military, which are members of the Homeland Security Department. Meanwhile, the Drug Enforcement Agency and FBI offices each had a U.S. Attorney’s Office representative on site, which keeps their processes abiding by the Constitution and laws.

The DEA explained the personal approach to enforcement, and how the things its agents see every day apply to the things we see on the news and issues politicians talk about concerning drugs. The FBI and Coast Guard, being broader-reaching agencies, talked more about their agencies’ greater impacts on society. FEMA and the Cybersecurity and Infrastructure Security Agency explained their role as providing resources for those on the ground, as “federally supported, state-managed and locally executed.”

We also learned how the Sept. 11, 2001, attacks taught the federal government it needed a better way to communicate among agencies in a national emergency so there would be no more confusion, misinformation or fear of crossing jurisdictions when national safety is on the line.

Boston Policy Week is a perfect example of why I came to Norwich. I wanted a community that encouraged learning in practical scenarios outside the classroom. The Boston Policy Week offered this very experience.

During our stay, we received information from the Coast Guard Sector Boston headquarters, the Department of Homeland Security, the Cyber Infrastructure Security Agency, the Federal Emergency Management Agency, the Drug Enforcement Administration and the FBI. In a classroom, a professor can only go so far to bring a textbook to life. I discovered during Boston Policy Week that experience is the best teacher.

“In a classroom, a professor can only go so far to bring a textbook to life. I discovered during Boston Policy Week that experience is the best teacher.”Thomas Walsh, criminal justice major

At the Coast Guard Sector Boston headquarters, sector commander Capt. Eric J. Douchette spoke about every section of his command as if he has covered every piece of channel and port himself. He showed us detailed maps of his element compared with a Class 3 hurricane. Suddenly, three cutters and a few thousand personnel did not seem nearly enough to combat such a devastating force of nature.

The Federal Emergency Management Agency’s organization and delegation of responsibility blew me away. When the agency needs to be called in, it controls immense amounts of resources. FEMA relies on delegating responsibility among its 5,000 full-time employees to create the most good out of a bad situation.

One day on our trip related more toward my major, criminal justice, than others. We visited a joint task force comprising the Drug Enforcement Agency; the Bureau of Alcohol, Tobacco and Firearms; the FBI; and the Massachusetts State Police. The DEA special agents’ said their common aim is reducing illicit drug use in America. Later, we were admitted to the Boston FBI headquarters and learned what the agency does.

Finally, we presented our disaster policy to Massachusetts’ acting governor. Given the situation, planning time allotted and our relative lack of expertise, both groups provided competent policies. By presenting to experts, we gained decision-making insight unavailable in a regular classroom.

Ultimately, Boston Policy Week gave me incredible insight into disaster policy and procedure while teaching me core values that align with my academic study. The lessons I learned were inspirational and reinforced through experience, which is something a classroom and textbook cannot always deliver.