Strivers on the storm 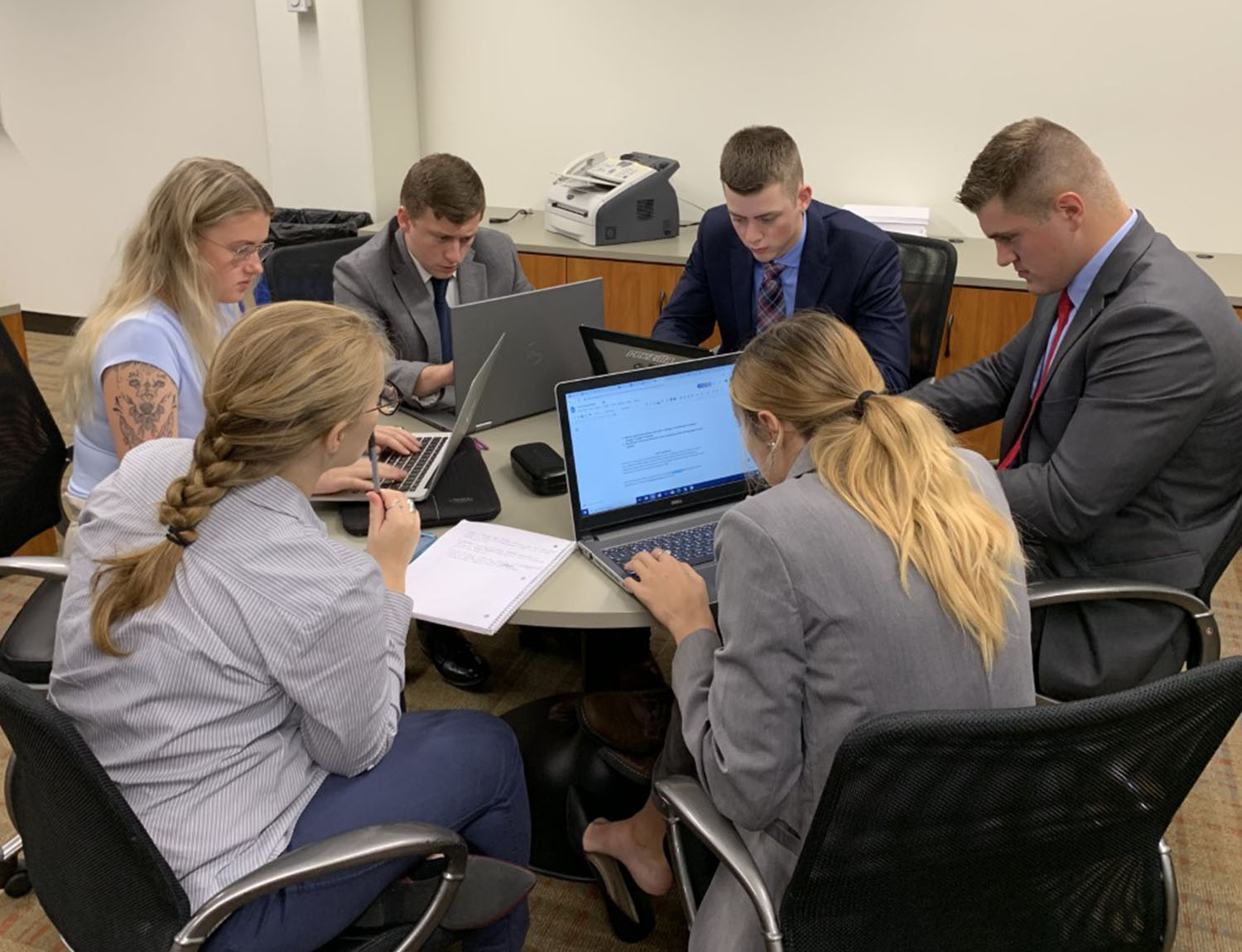 First went the sun, then came the rain; a dozen Norwich students were witnessing the eye of the hurricane. And oh, what a mess it would leave.

It was the second annual iteration for Boston Policy Week, which the Peace and War Center and the College of Liberal Arts sponsored.

“Attempting to uphold the duties and roles of each of these personnel to create a plan for natural disaster was tough. It took a lot of teamwork within our group to communicate our roles and how we help each other out.”Nathan Barbieri, Norwich University criminal justice major

The storm scenario went like this. On Oct. 16, a tropical depression formed between Africa and the Windward Islands that evolved first into a tropical storm then into a Category 3 hurricane called Peter. As the storm system progressed, National Hurricane Center forecasters predicted a near miss for New England’s coastline. The storm’s track showed brushes with Puerto Rico and the U.S. Virgin Islands and possible strikes from Cape Hatteras, North Carolina, north to the Maritimes in Canada and east well out to sea.

The storm gathered speed and its center moved closer to New England. On Oct. 19, forecasters rerated Peter as a Category 2 hurricane. Forecasters debated where the storm would strike; some models predicted a strike between Chatham, Massachusetts, and Watch Hill, Rhode Island; others foresaw a strike closer toward New York City.

As the storm’s track clarified, and the threat for southern New England, Long Island and New Jersey intensified, emergency response teams began hurricane preparations — evacuating of coastal regions, activating shelters and launching public information campaigns. Residents prepared for what could have been the worst storm in decades.

Providence, Rhode Island, was hit particularly hard. Although the city had time to lower hurricane barriers, there was no holding back flooding caused by heavy rains and swelling of the Woonasquatucket, Moshassuck, and Providence rivers.

“Learning in the classroom provides an important foundational understanding of the structures of government and policy process,” Thunberg wrote, “but the College of Liberal Arts and the Peace and War Center recognize classroom engagement is not enough to prepare students for life after Norwich.”

Steering through the simulation

In the hurricane simulation, students, who’d been assigned a role at a federal agency before the trip, split into two multidisciplinary teams. The idea was showing that many agencies must act quickly, and collectively, to address devastating problems, especially when lives hang in the balance.

The students started with partial information and adapted their planning as they visited sites — FEMA, the Coast Guard Sector Boston, the Homeland Security Department’s Cybersecurity and Infrastructure Security Agency, the Drug Enforcement Agency and the FBI — and learned more. Desilvio said pressure and uncertainty forced the students to work collectively.

Barbieri agreed with her.

“Attempting to uphold the duties and roles of each of these personnel to create a plan for natural disaster was tough,” he said. “It took a lot of teamwork within our group to communicate our roles and how we help each other out.”

Students ultimately convened at the Federal Emergency Management Agency Operations Center in Boston to present a disaster relief policy to several FEMA coordinators. The students received final details on the hurricane’s damage and created a final plan to mitigate it.

Besides practicing team-building and collaboration, the students leveraged Norwich’s alumni network. Many of the university’s graduates work in the agencies the students visited and helped lead the exercise.

“The connections I made with alumni both at the agencies and outside over three days really show the impact that these opportunities have on students,” Desilvio said.