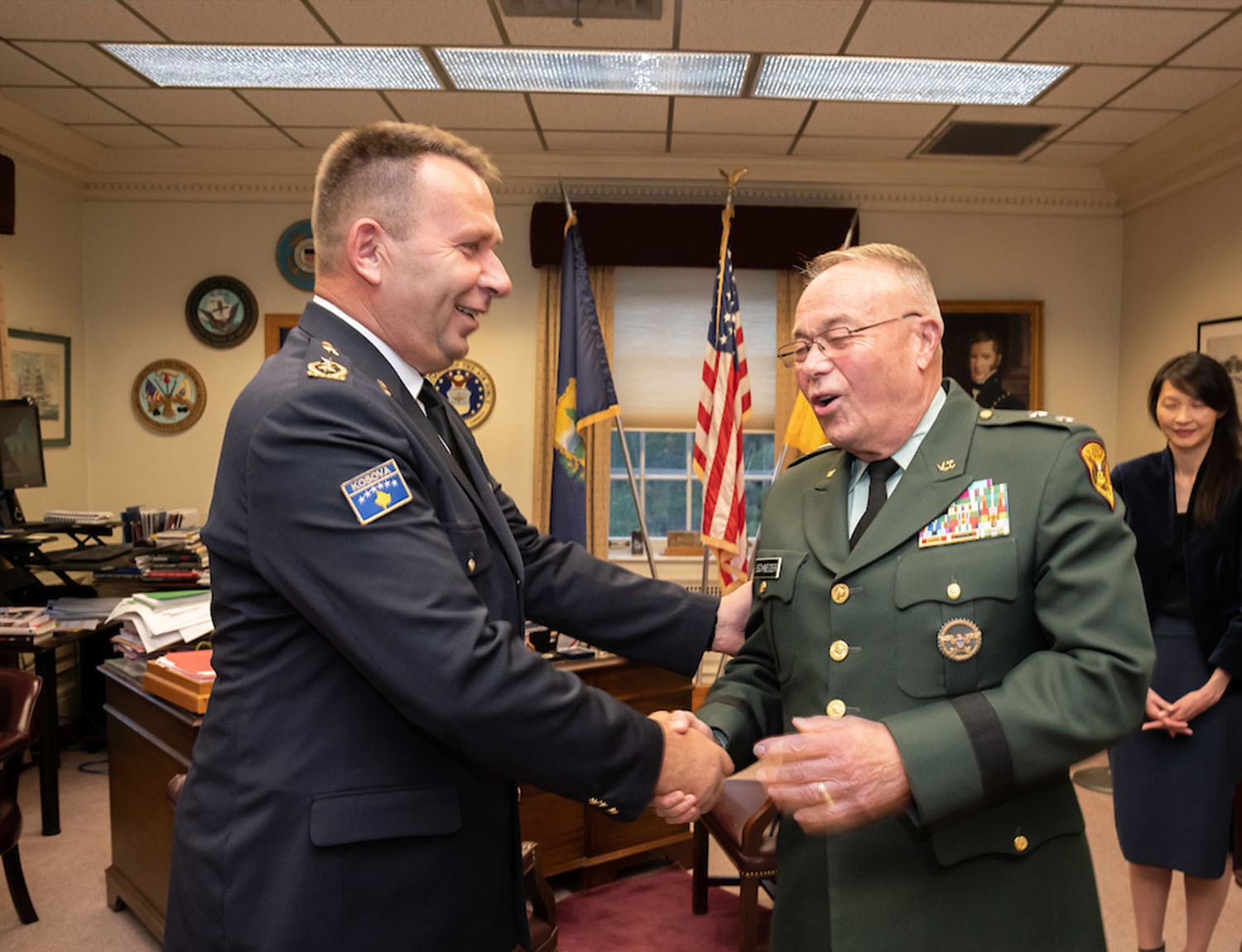 Norwich University has already extended its opportunities overseas with study-abroad programs in Germany and China. In October, Norwich aimed to make new inroads into Kosovo.

Kosovo Security Force Lt. Gen. Rrahman Rama visited campus Oct. 17 to sign a memorandum of understanding to stoke collaboration in education, military scientific research and competitions among Norwich and Kosovar cadets. The cooperation agreement is expected to start in 2020.

“I saw the leadership it produced in the cadets that I met. That’s when I knew I wanted to come here.” Kaylee Olander, Norwich Corps of Cadets member

Rama also sat at President Richard W. Schneider’s table at a dinner with the university’s Board of Trustees.

Norwich already has ties with Kosovo. Last summer, with funding from the Olmsted Foundation, 11 Norwich cadets visited Kosovo and other Balkan nations to observe NATO’s role in mitigating conflict.

“Kosovo is a really unique environment because of its history, because of the conflict there, because of the NATO mission there and also because of the complexity with ethnicity and religion,” Morris said during Rama’s visit. “And it’s an emerging nation and there’s a lot of opportunities there. (Kosovo’s military is) interested in sending (its) cadets here, simply because of who Norwich is and the previous connections we already have.”

Babak, an international student from Afghanistan, said Norwich complements academics with intellectually enriching opportunities. He described participating in Peer-to-Peer Challenging Extremism, a 2017 national collegiate competition aimed at countering domestic and foreign terrorism, and researching the online activities of the Taliban with Morris this past summer and visiting Carnegie Mellon University in Pittsburgh for a workshop on network text analysis.

Shortly after Rama’s visit, Babak, accompanied by Morris, visited Qatar to present his findings at the World Congress in Criminology.

Babak said when he returns to Afghanistan after graduation, he’ll bring social connections and strategic flexibility developed at Norwich.

“The most important thing is looking at a problem from different aspects,” he said. “That there isn’t one solution for something, there’s always something better and easier that you can do.”

Olander discussed Norwich’s military lifestyle, including her training, the leadership laboratories she’s attended and her pursuit of a U.S. Air Force commission. She said she had always been attracted to military service, having grown up in a military household, the daughter of two enlisted parents. She said she chose Norwich to be close to her Massachusetts home and because she fell in love with the campus after participating in a summer Future Leaders Camp

“I saw the leadership it produced in the cadets that I met,” she said. “That’s when I knew I wanted to come here.”

Rama said he was glad to connect with Norwich, whose reputation for excellence had spread to his country and whose cybersecurity programs he values.

“Based on the program and based on the plans we have, we are seeing future cooperation with your university here,” Rama said. “The program here is similar and the orientation is clear. We grew up our organization based on American standards and doctrines.”