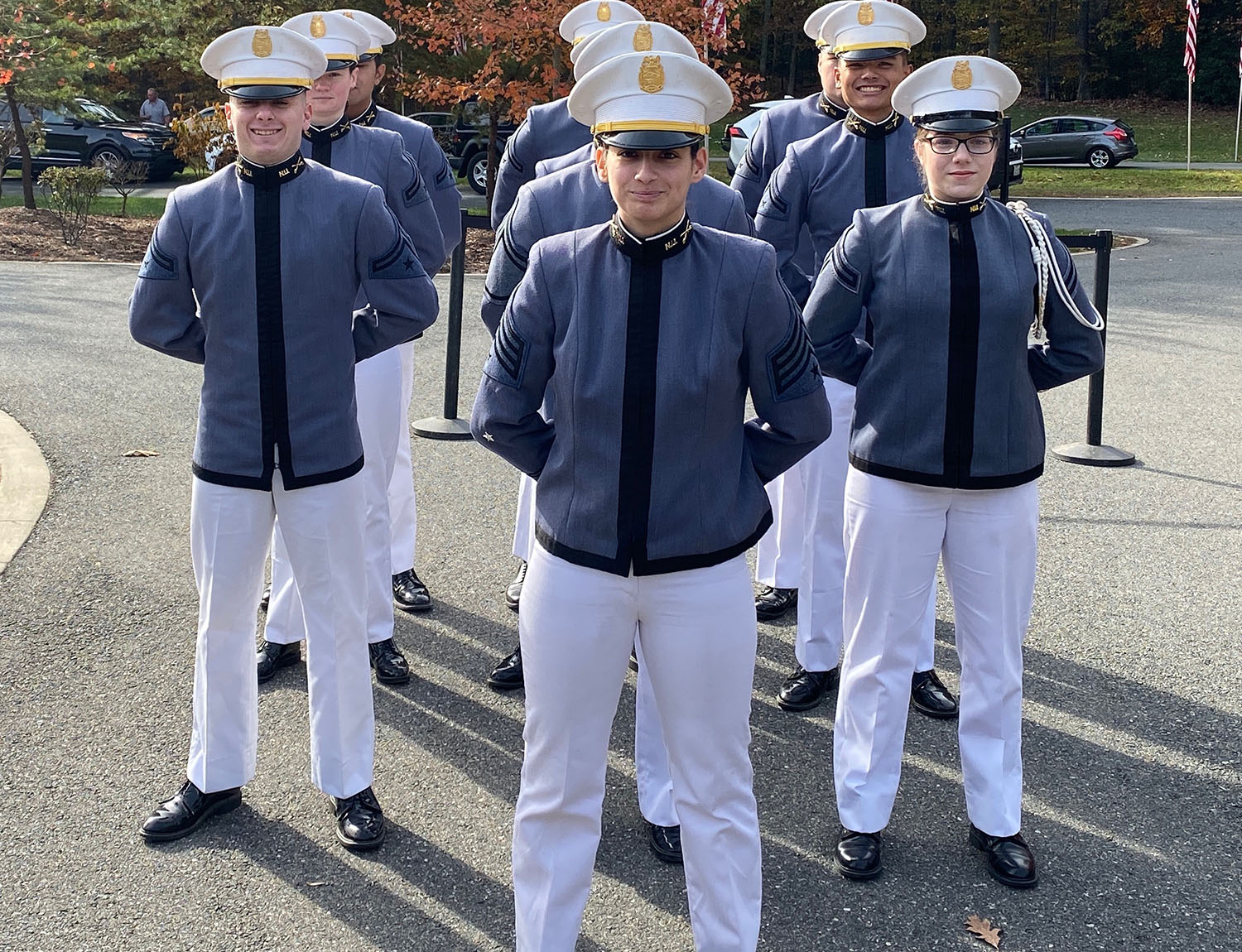 At the Veterans Day tribute at Quantico National Cemetery in Virginia, Eugene “Gene” Deatrick, a retired Air Force colonel and U.S. Military Academy graduate, called out Norwich’s 10 uniformed, and two civilian students, as they stood at attention during the tribute. The group’s cadets had saluted Deatrick, known for helping rescue U.S. Navy Lt. Dieter Dengler during the Vietnam War, as he passed them before the ceremony.

“I stood there thinking, ‘You can’t make this up.’ This is something these (students) will always remember.” Billy “Skip” Powers, associate program director, Master of Public Administration, College of Graduate and Continuing Studies

Deatrick is a member of All-American Veterans of Foreign Wars Post 7916, in Occoquan, Virginia, which includes Billy “Skip” Powers, associate program director of the Master of Public Administration in Norwich’s College of Graduate and Continuing Studies and Norwich alumnus John Palo ’73 as members.

The post has supported the DC Expedition by helping to fund transport to the Quantico ceremony, hosting a welcome lunch and sponsoring several Norwich students at the 200th birthday gala in Washington. Powers and his wife, Carrie, bought the students lunch on Monday before the Quantico tribute.

Andrew Hird, a retired Air Force colonel and special assistant to the provost, said the Veterans Day tribute experience, which coupled with a tour of the National Museum of the Marine Corps, also in Quantico, fit with the Washington semester’s professional-development goal.

Being in the nation’s capital, the center of national governmental power and a major metropolis, exposes students to experiences unavailable on the Vermont campus, such as working in a large metropolitan hospital or networking with people from “three-letter” governmental agencies to which Norwich alumni have ties, including the NSA (National Security Agency) and CIA.

After seeing the cadets, Deatrick, whose Vietnam heroics were recounted in the Werner Herzog films “Little Dieter Needs to Fly” (1997) and “Rescue Dawn” (2006) wanted to meet them, Powers said.

Powers said Norwich’s cadets, led by their team leader, Nicole Foilb, told Deatrick of the university’s “I will try” motto and origin story as the nation’s oldest military college. Deatrick, in return, recounted “I will try” moments from missions as an experimental test fighter pilot in the Air Force.

“This interaction personifies the Norwich motto, I will try,” Powers said by email. "The cadets are able to see how ‘I Will Try’ was the servant attitude of a young fighter pilot to strap into experimental aircraft and sail into the wild blue yonder with peers like Chuck Yeager. Their determination advanced our air superiority and recognition as a global superpower.”

In a later telephone interview, Powers said he’d seen Deatrick often during several past Quantico tributes but had never seen him cross the parade ground to greet a group.

“I stood there thinking, ‘You can’t make this up.’ This is something these (students) will always remember,” said Powers, who served eight years in the Air Force and is now deputy director of the U.S. Homeland Security Department Cybersecurity Infrastructure Security Agency. “(On Monday,) they got to see what veteran really means … what honor really means. These students got to see that, ‘Wow, what we’re preparing for is bigger than this moment.’ They got to feel the pride of being on the cusp of being something great.”

Agreeing with Powers, Hird said the Veterans Day tribute showed the students that what they’re preparing for — life as responsible citizens — is worthwhile.

“When someone looks at you who’s wearing a VFW hat or has an American flag on their back, you know it proves the worth of where you’re going … to be men and women who make the future positive,” said Hird,  “because that’s what those men and women did.”

Foilb, a sophomore security information major, said although she’s participated in Veterans Day events on campus, going to Quantico was new. She said she was amazed to see so many people gather at the tribute and amazed again when Norwich’s contingent was recognized and crowd members turned to smile at them during the ceremony.

“That was breathtaking,” she said by phone from Washington.

Foilb said she felt a sense of community and cooperation as she watched motorcycle escorts lead veterans to the tribute site and preteens from the Young Marines program mind event details.

She said she and her group also reveled in Deatrick’s stories.

“That was a really cool experience for all of us,” Foilb said. “None of us can get anywhere without trying and he was a perfect example of that. We took what he said to heart.”

To learn more about Norwich’s DC Expedition and its related internships, email Col. Andrew Hird at This email address is being protected from spambots. You need JavaScript enabled to view it..