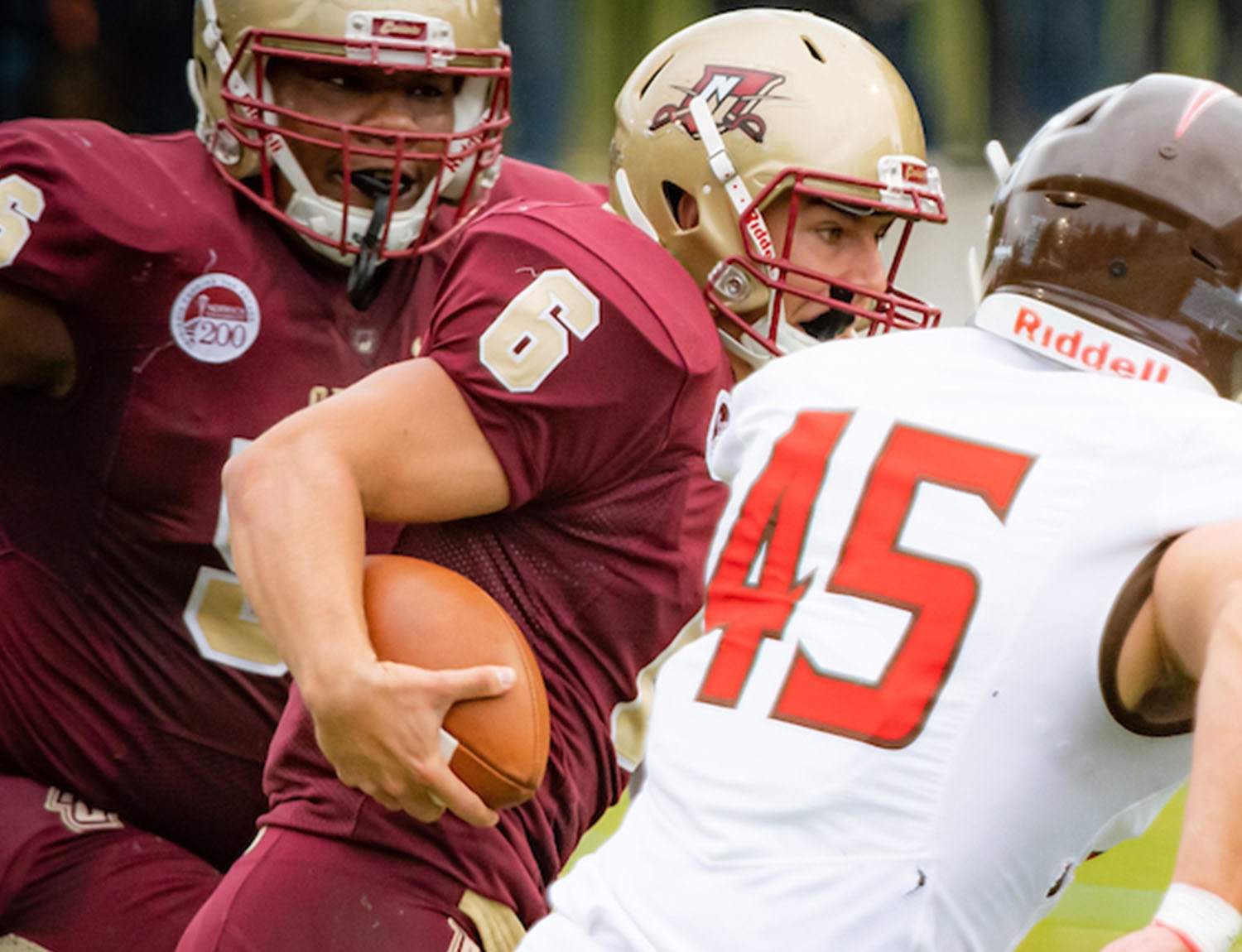 First, the good news for Norwich University’s football team. The Cadets held the lead against host Massachusetts Institute of Technology into the third quarter Saturday. Quarterback Matt Dunn, playing in his home state, threw for 300-plus yards. Wide receiver Manni Romero had 100 yards-plus receiving. Both players moved up in Norwich’s record books.

Now, the bad news for the Cadets. The lead didn’t hold and the Engineers won 34-21.

With the win, MIT (6-2 overall and 5-1 in New England Women and Men’s Athletic Conference play) positioned itself to earn the league’s automatic NCAA Tournament bid with a victory this coming Saturday.

Norwich dropped to 2-4 in league play and 5-4 overall.

Norwich and MIT were mostly even in total offense (Norwich held a 364-362 yardage edge) and the Cadets outgained the Engineers in the air, 342-227.

Norwich also showed early ingenuity, taking a 7-3 early game lead on a trick play. Dunn lateraled the ball cross-field to Ryan Reed who threw the ball back to Dunn, who raced 20 yards up the sideline for a touchdown with 4:33 to go in the second quarter.

Later, with 9:59 left in the third quarter, Dunn threw to Romero for a 62-yard pass play helped the Cadets take a 14-13 lead. It was the game’s longest play from scrimmage.

The lead shifts to MIT

But MIT took back the lead for good with 5:12 in the third quarter, when quarterback Chris Mauck completed a 13-yard touchdown pass to Eric Bradford. The catch was Bradford's 100th as an Engineer. MIT had the next two scores (passed of 28 and 7 yards from Mauch to Keithen Shepard) and put the game out of Norwich’s reach.

The Cadets scored its last touchdown on the game on Dunn’s 6-yard pass to Reed to cap a 12-play, 80-yard drive.

Dunn, a junior from Rockland, Massachusetts, had 28 completions (on 56 attempts for 322 yards), to take  second place all-time in Norwich history with 336 career completions. Dunn surpassed Kris Sabourin ’13, who amassed 310 completions as a Cadet. Ben Clark ’04 tops the all-time list with 458 completions.

Romero, meanwhile, had seven catches for 140 yards and a touchdown. His 17 career touchdowns tied him for second place all-time with Ryan Squires ’00.

On defense for the Cadets, senior defensive lineman Martin Bailey had a game-high 14 tackles, (including for loss) and forced a fumble. Senior linebacker Cahan added 11 tackles.