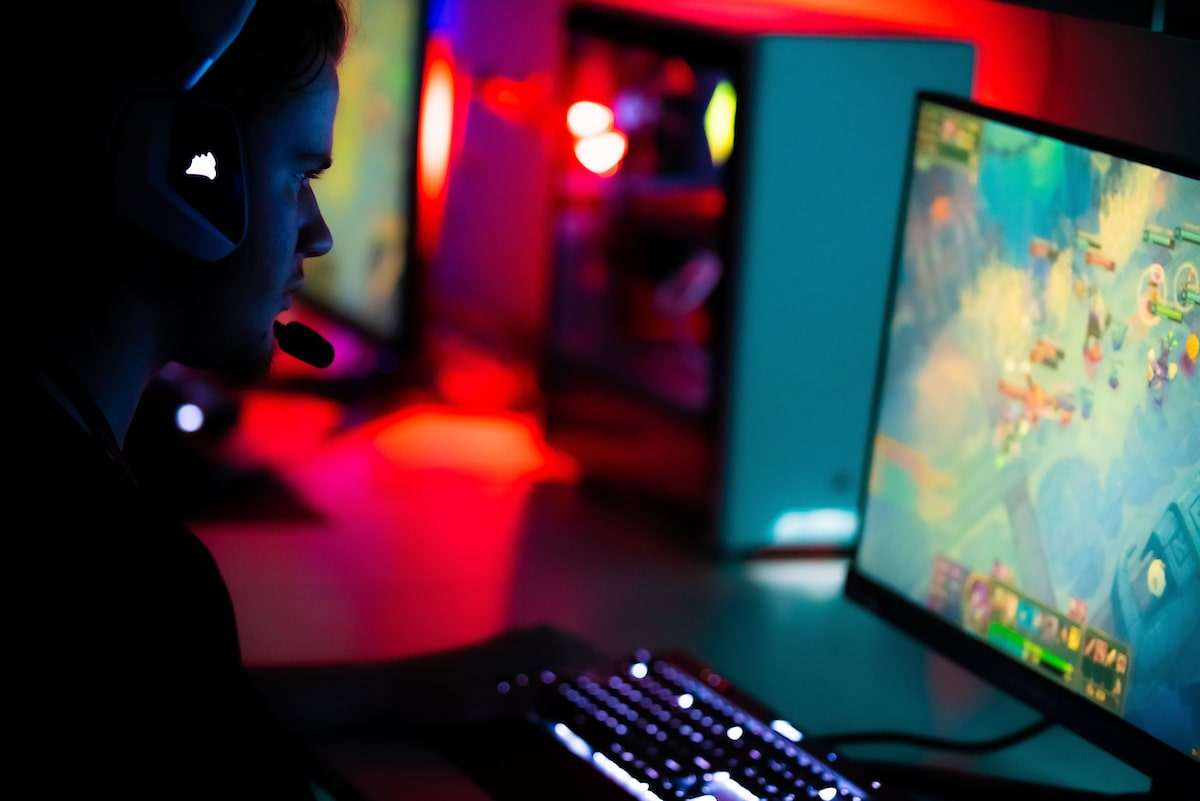 Welcome to the machines.

This arena has neither turf nor ice nor mats nor hardwood floor. But this ring of connected terminals in Mack Hall opens to the electronic space where Norwich’s esports team connects, practices and competes.

Norwich’s esports team officially launched in fall 2018 after computer science Professor Jeremy Hansen organized enthusiasts and entered them in competitions. The team is preparing to compete in events governed by the National Association of Collegiate Esports, a governing body founded in 2016.

“Practicing looks a little different than (for) an athletic sport. But it’s just as necessary in terms of reflexes.”Jeremy Hansen, esports team faculty adviser

Over the summer, Kaylan Duncan, a 2019 Norwich graduate, used an email blast, a Facebook page and word-of-mouth recommendations to draw 20 people to a brand-new weeklong esports camp. Campers came from far and wide, he said, some flying in.

“Only one of the people in the camp was from Vermont,” he said, adding that others in the mid-July session came from North Carolina, Indiana and Ohio, among other states.

To accommodate the League of Legends club, Hansen made the game one of three games Norwich’s team would play in tournaments; the others are “PlayerUnknown’s Battlegrounds” and “Rainbow Six Siege.” This year, the team has added three more games, Hansen said: “Apex Legends” "Counter-Strike: Global Offensive” and “Rocket League.”

Norwich’s esports teams play at the varsity, junior varsity, and club levels, practice regularly and compete against colleges in North America. Hansen estimated the current team, on all levels, numbers more than 60 players.

Players who try out and make varsity are eligible for annual $3,000 scholarships toward their Norwich tuition. (Academic standing, experience, ability, and fit figure into the awarding of scholarships, according to the team’s Norwich webpage).

The value of practice

As on traditional sports teams, players who skip practice don’t stay on the team.

“Practicing looks a little different than (for) an athletic sport,” Hansen said from his Mack Hall office. “But it’s just as necessary in terms of reflexes … and some of these games are on maps; you have to understand where things are on the map so you can react appropriately.”

The past summer’s esports camp ran at Mack Hall in a room featuring a ring of local-area-network-linked computers. Duncan, who studied business management, international business, and economics at Norwich, said he hoped the new esports camp will contribute to Norwich’s efforts to offer scholarships and encourage top-drawer esports players to enroll. (By NCAA rules, Norwich’s traditional Division III sports programs cannot offer scholarships. But esports are not governed by the same NCAA rules and thus lack scholarship restrictions).

Ryan Palumbo, a junior communications major who helped run the camp, said he hopes one day to go pro playing “Rainbow Six Siege.” Barring that, he said he hopes to work for a game organization, perhaps as a recruiter or public-facing speaker.

He said he joined the esports team after meeting and playing with Duncan and other game enthusiasts.

“I thought it was a cool thing,” he said.

“Video games are a huge thing in people’s lives,” Palumbo said. “Multiple kids are gaming every day, hours a day … so, focusing on gaming and having people run it at the school and love it is a great way to get people to want to come to Norwich and be part of a growing program that would be successful.”

Mallory Dutil, a senior environmental science and chemistry major who also helped with the camp, said she thought games fit into Norwich’s culture because the school has so often been pioneering.

“Norwich tends to be the leader in a lot of stuff,” she said, “whether it be military or not.”

Duncan declared the new camp a success and said it can help draw future students to Norwich and fit into the university’s Norwich After Next (NUaN) strategic plan.

Norwich After Next, spanning from 2018 to 2035, aims to expand enrollments; build financial sustainability for the campus; and strengthen the student experience and brand.

“It’s a simple A to B equals C,” Duncan said. “A, gamers (who) are in high school, or middle school even, plus B, having a program here and super-flashy items to catch their eye such as the summer camp and how we run it with what technology, equals C, them straight up coming here for this one reason.”

Julian, meanwhile, said her esports experience taught her teamwork and how to think fast on her feet. Both are valuable workplace skills that defy the stereotype of video gaming as a mind-numbing individual task.

“We have to learn how to effectively communicate with teammates, work well in a team, do your specific part in the team while also aiding your teammates where they need it,” said Julian, who now works as an information security analyst for Vermont. “And you have to have fast decision making, because each match is going to be different and have unpredicted events making them unique and challenging.”