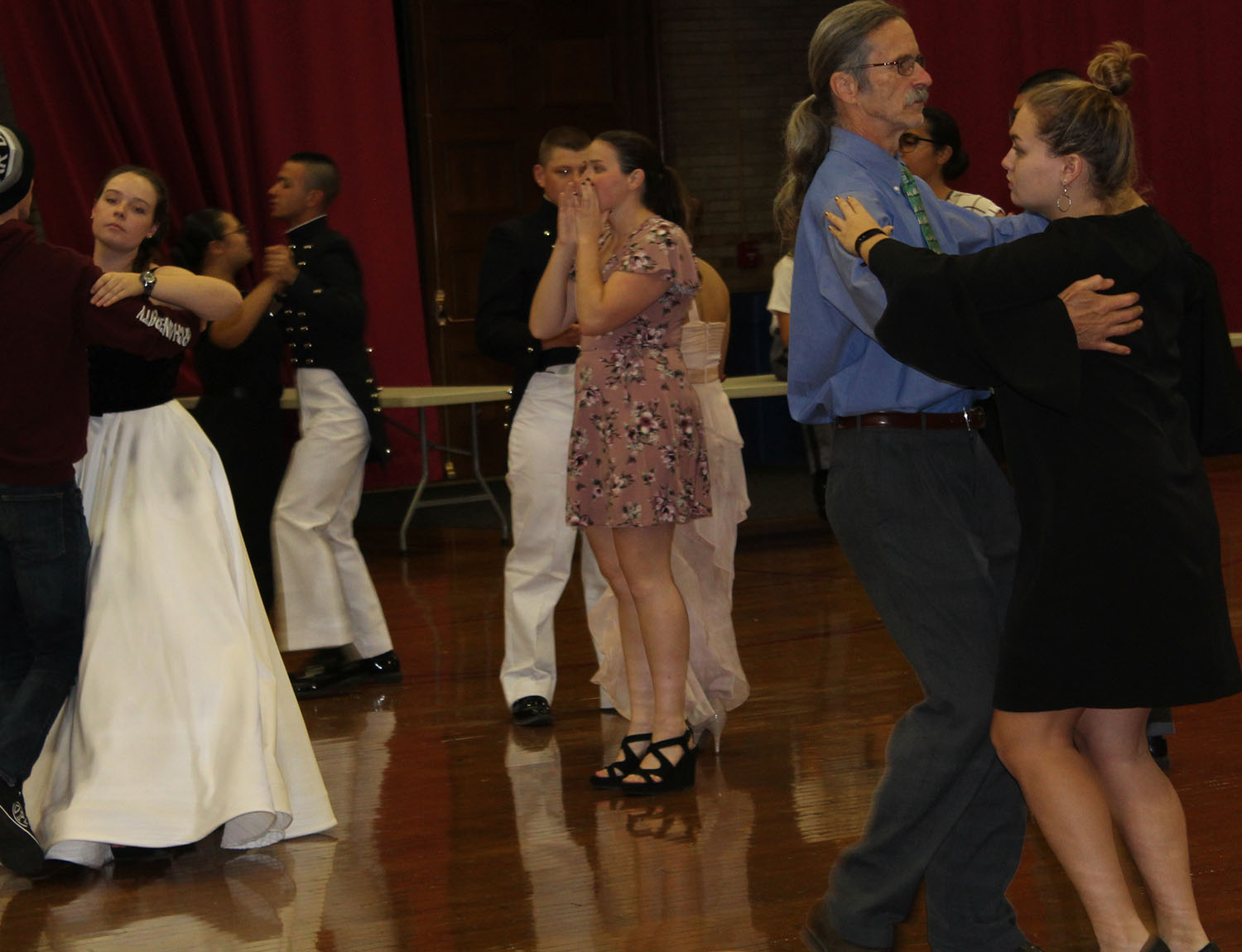 The jazz band had yet to lug its instruments — horns, bass drum, electric bass — across Plumley Armory’s shined-to-a-gloss gym floor. And the Regimental Ball’s pomp and pageantry were a day and a night away. But on a late October Friday night, a few dozen dedicated members of Norwich’s Ballroom Dancing Club had their dancing shoes on.

Recorded songs and the public address system were all the group of about 40  needed to pair off and turn, twirl and glide in front of a huge American flag. Some club members wore their “Regi Ball” outfits, dress blue uniforms for male Corps of Cadets members, party dresses and spiky, sparkly shoes for some women, Corps or otherwise. A few dancers donned T-shirts and jeans, anything to allow movement.

“And it all just contributes to this form of expression that’s very unique and I find that almost profound, to be able to do something in silence and express so much.”Kenneth Beguhl, Ballroom Dancing Club member

Kenneth Beguhl, a freshman mechanical engineering major, joined the Ballroom Dancing Club at his mother’s behest. Other Norwich parents on Facebook encouraged her to push dancing for him, believing it would ease Corps rookdom’s stresses.

“I saw the posters, I saw the flyers around school, and I grabbed one,” he said. “The email went out for the first meeting and I was like, ‘I’ve gotta go.’”

With Norwich’s trademark “I will try” moxie, and timing learned from playing the tuba, Beguhl jumped in with both feet. If you can count (often up to six), you can dance, he said, although mastering rises, falls and rhythms takes practice.

“I know on the waltz, you go down on one (count), over on two and come up on three and there’s a little pause,” he said. “Along with the counts, there’s a way you’re supposed to move your feet, there’s a way you’re supposed to keep your body. And it all just contributes to this form of expression that’s very unique and I find that almost profound, to be able to do something in silence and express so much.”

Beguhl said dancing was teaching him another signature Norwich skill, leadership. As a leader, he takes his partner with him, but he’s learned that if he’s mindful of the “box” — the space between partners’ bodies — and communicates, confidence builds and dances go smoothly. Partners look over each other’s shoulders so nobody crashes into other dancers — or walls.

Mahal Poniente, a freshman psychology major, said she likes swing dancing for its quickness and mentally maps the floor as she moves: step here, spin there.

As a previously inexperienced dancer, the club’s learning curve started steep, Poniente said; she had to master movements and trust her partner’s lead. (Ginger Rogers famously said she had to do everything Fred Astaire did backward and in heels, although partners, and leaders, now can be any sex and wear any shoe).

“The first couple of times were rough, I did stumble a lot,” she said. “But after getting down the basics, I just flew from there.”

Ballroom Dancing Club President Callista Lemieux, a junior physical education major with minors in health and coaching, relished the night’s motion and commotion. She waved her arms and shouted over chatter, herding dancers first into lines, then into merengue circles.

The dress rehearsal capped a busy fall season, she said. Although club sessions usually draw 12 to 14 students during spring competition season, they draw up to 60 in the fall, as a wave of rooks enter to ready for the Regimental Ball.

This year’s ball would be special, Lemieux said; the club had pushed to have the floor during a classical music portion so members could showcase skills and professionalism polished in Monday night lessons with Bill and Carolyn Pedrick, world-class ballroom dancers from Northfield, Vermont.

Learning to dance might have seemed daunting enough for novices; the ball’s spotlight might worsen the pressure. But Lemieux, who remembers joining the club as a novice herself, said members pick each other up. Sometimes, she said, club officers will take struggling dancers aside to break down steps; sometimes reminding them to look up at their partners and not down at their feet.

“We’ll say, ‘What exactly do you need help with?’” she said. “We’ll perform side by side with them or partner up with them because putting a beginner dancer with a more advanced dancer can help (the beginner) understand where their foot placement is even if they’re following and we’re leading or vice versa.”

Lemieux called dancing a passion and a pleasure, a perfect release after trying days. The club (like many at Norwich) focuses on mutual success, she said. Stumbling brings no scolding; dances simply start again.

Brenda Lomax, who may have had the night’s best footwear — a set of high-top shoes (or were they slippers?) covered with cartoon polar bear cubs — certainly seemed to enjoy trips around the floor with her dance partner of two years, Drew Wagner.

Wagner, a senior mechanical engineering major, like Lomax, a senior history major, is in the Corps of Cadets. He said he started ballroom dancing three years ago on a dare — someone told him he wouldn’t stay with it. But, of course, he did.

“You know when you mess up, because you step on someone’s feet,” he said.

Does it hurt, he was asked.

“I don’t know. I don’t get my feet stepped on, it’s her,” Wagner said, glancing at Lomax.

She replied, “I step on you sometimes.”

Wagner said, “It doesn’t feel great, but you just keep moving on.

I believe I can fly

Rina Scherbatskoy, a junior nursing major, said she learned ballroom dancing in class required at her alternative, Waldorf Education model-following high school. She said she got her father, Jon Scherbatskoy, to come along so she’d have a ride. (He’s now spent several years as the Norwich club’s adviser and is an instructional developer in the university’s Information Technology Services department.)

“When you get caught up in dancing and you get to the point where you don’t have to think, it’s magical to be flying around with someone.” Rina Scherbatskoy, Ballroom Dancing Club member

Rina, a civilian student, said she doesn’t dislike dancing with her father, now Norwich’s Ballroom Dancing Club adviser, although she jokes about it (“He’s my dad. Ew.”)  She acknowledged that he’s gotten pretty good over the years.

Rina said dancing suits her, because she’s no sitter and swing dancing frees her.

“I have a big history in theater, so I got over my stage fright a long time ago,” she said, explaining that the Regimental Ball’s spotlight brought no angst. “For me, there’s a little bit of nerves under there, but that’s what drives you forward. … I love dancing and I love being onstage; I love having an audience.

“When you get caught up in dancing and you get to the point where you don’t have to think, it’s magical to be flying around with someone,” she said, “and able to keep going and going.”