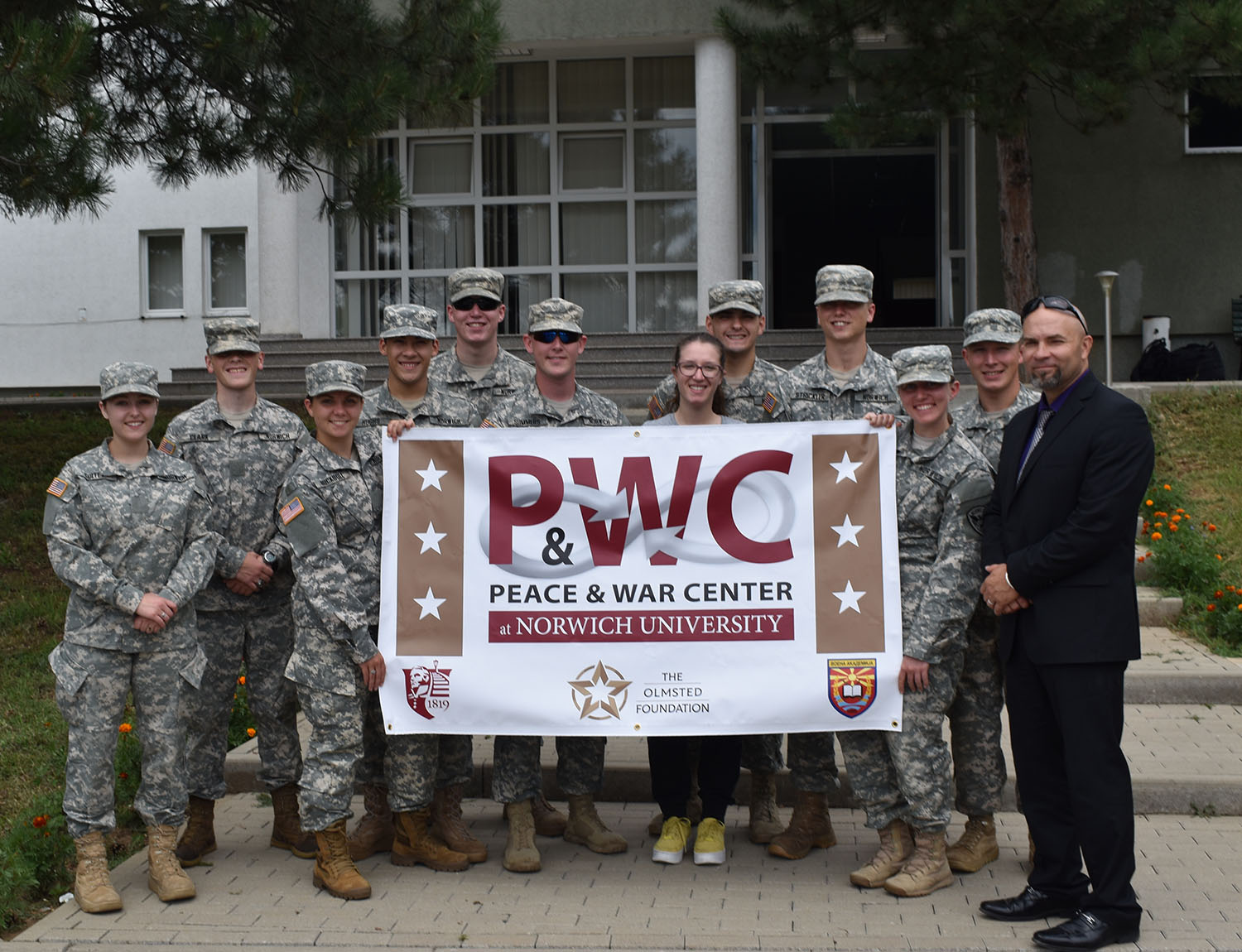 In summer 2019, a team of 11 Norwich University cadets and one member from the Gen. Mihailo Apostolski Military Academy of North Macedonia visited the Balkans on a field study trip. The goal was providing future officers from two countries first-person experience to understand and evaluate conflict and to cooperate internationally with other nationalities.

The Olmsted Foundation funded the trip, coordinated in partnership with Norwich University’s Peace and War Center.

Here are recollections of the journey from some of the Norwich students, edited for length and clarity.

The opportunity to experience and understand culture through the lens of peace and conflict is one of the most important and overlooked aspects of leadership. As team leader for this experience, I worked with everyone to ensure success before and during our travels overseas. This meant that I needed to understand every aspect so I could communicate our priorities effectively as a team. This allowed me to receive hands-on leadership experience through a multidimensional process.

“Being able to interact with people who, during the war, lost their way of life ... was humbling.” Riley Clark, Bosnia and Herzegovina liaison

I also became the expert on Bosnia-Herzegovina, where the most casualties happened during the Yugoslav war. Researching a conflict at school and then being able to interact with people who, during the war, lost their way of life — both the ability to provide for themselves and to give their families the basic necessities such as food, shelter, and security — was humbling. I was able to immerse myself in the culture by trying physical things, like coffee and food, as I learned and connected with the locals. I gained a new appreciation and understanding of the conflicts within the region.

As a future junior officer in the U.S. Army, this field study, which had me work with others from new cultures and lead a team that planned and executed a multicountry journey, has enhanced my ability to lead and operate in new environments. How people identify themselves matters because things have different meanings depending on their culture. Leaders need to recognize this to lead effectively in foreign environments.

This experience also gave me an appreciation for logistical tasks and interacting with high-level leaders. I am filled with gratitude for this experience and value these newfound skills as I progress in my career.

When I pictured myself traveling abroad for the first time, the Balkans did not immediately come to mind as a destination. But having completed our journey, I am extremely grateful this was my first international experience.

Growing up, I never learned about the Balkan countries. I understood generally where they were and which countries they included, but I had never been exposed to the cultures and the history of their conflict. I am thankful that this experience enlightened me about an area of conflict that I may otherwise never have known. As a future Naval officer, the skills I learned abroad are invaluable.

“I believe that every military officer is a diplomat.” Mollie Coltey, communications officer

There were numerous occasions when I had to stop, take a breath, and adapt to my new surroundings and overcome situations and interactions I found somewhat uncomfortable, mostly because of something uncommon in our own culture. However, these instances taught me to adapt on the fly, which is one of the most important skills a junior officer must learn.

I believe that every military officer is a diplomat. Between interacting with foreign political officials, military members, cadets, and locals, I was afforded countless opportunities to practice the skills and qualities of a diplomat, such as being patient, open-minded and willing to listen. Learning to cooperate and overcome cultural obstacles is a lesson learned after training and during missions by many young military officers, which is far too late. The lessons I learned have greatly influenced me and made me a more well-rounded and competent future officer.

I will never forget the opportunity to travel to and understand the Balkans, both because it was my first time abroad and because of the incredible people we met with to understand and analyze NATO’s role in the region. We, as cadets, had incredible opportunities to learn, including visiting the president of Croatia’s mansion and having lunch with Mr. Miroslav Tudman, the son of first president of Croatia, Franjo Tudman.

“As a future officer, adapting to any situation and finding solutions is crucial to the success of the mission.” Sean Doody, D.C. NATO simulation officer

As a future Army officer, I have learned that it is necessary to understand other cultures when working with foreign militaries. Although some NATO allies operate and organize their military in ways similar to the United States, some nations lack strict timelines and organized structures to ensure that a task, such as passing down information, is accomplished. At one point during training I was told to “roll with it” — a foreign concept to me. As a future officer, adapting to any situation and finding solutions is crucial to the success of the mission, as is cooperating with other nations.

I think I learned the most important thing from this trip in North Macedonia at the Summer Campus. There, I learned that all countries can share a common bond — different military branches may sometimes poke fun at one another (for example the Air Force may kid the Army about diligence), but at the end of the day all of them know the war will be won together.

More importantly, after meeting with cadets from our allied nations, I realized that this idea of fighting together extends to them.

Being from the United States, I am from a place where we define ourselves of American first, then our ethnic background. Through this field study, I learned that this concept is flipped in most places around the world, including the Balkans. Ethnic ties are what bond people together in this region, which is essential for representatives of the United States to understand. Learning about the distinct ethnic and religious divide in these countries has been an experience that will last me a lifetime.

”Ethnic ties are what bond people together in this region, which is essential for representatives of the United States to understand.” Paul Hughs, Kosovo liaison

As a representative of the United States, it is vital to understand the complexity of this part of the world, which has resulted from thousands of years of history, ethnic strife and religious conflict. Without that knowledge, no one can effectively interact with people from this region or solve extremely complex issues — issues NATO and the United States military work to solve every day. Having just scratched the surface in knowledge about these cultural divides, I feel confident and well prepared to deal with other cultures.

I was fortunate to be able lead one of the scenarios we ran at the Macedonian Summer Campus. I learned how to lead and motivate cadets from other nations, see how they operate, and understand their expectations of a leader, an invaluable experience I will never forget.

“Wait, where are you going? The Baltics?”

I was asked this question by numerous people when I told them I was part of this field study in the Balkans. This made me realize how few people understand this region’s location, let alone its conflicts.

However, it is important to understand that conflict is happening everywhere, oftentimes in places that seem peaceful. Being a future Army officer, the places I will go are unknown; I will have to learn new perspectives quickly and adjust to new cultures. To understand a new society, it is important to understand the history, culture, and values of the society, yet, this is not taught to junior officers. Instead, we are deployed and expected to learn it on the fly. As long as we were knowledgeable tactically, the rest with fall into place, right?

”To understand a new society, it is important to understand the history, culture, and values of the society.”Sarah Ingraham, Croatia liaison

Well, this is not the case, and usually causes more tension and problems because of a lack of understanding and an absence of compromise and cooperation.

This field study made me responsible for planning, interacting, and analyzing the perceptions and values of foreign countries. It taught me how to build relationships with other nationalities, and better appreciate their people and security concerns. I am extremely thankful to have had the opportunity to learn to cooperate with other countries and understand their values. These are invaluable skills that I am eager to teach to those around me once I commission in May.

If American society became aware of more simple, yet cringeworthy, infractions involving genocide and ethnic cleansing, innumerable world conflicts would be solved. The Balkans region is often overlooked since it is composed of less populated or militarily powerful countries. I learned through this field study that less-known countries are packed with historical and cultural details.

These details, often stemming from a historical conflict, are as prevalent now as they were hundreds of years ago. They are critical to understand when trying to learn how NATO influences conflict and peace within the region. This field study made me aware of the importance of identity. As a future officer, it will be critical for me to use this information to understand what makes “the people tick,” in the Balkans or any other region I will work in.

”Being able to understand a conflict’s source … will make me a more effective officer.”Jacob Strickler, Slovenia liaison

Being able to understand a conflict’s source and how to apply knowledge I learned in this field study will make me a more effective officer who can work cohesively with our allies and partners. On top of learning how to interpret and understand conflict, serving as travel officer taught me about the stress and reward of planning logistics.

Throughout the trip, it was extremely fulfilling to see the months of preparation and research come to fruition; this is something I never thought I would have the opportunity to learn as a cadet. Through this field study I was able to enhance my skill sets far beyond than I would have ever expected.