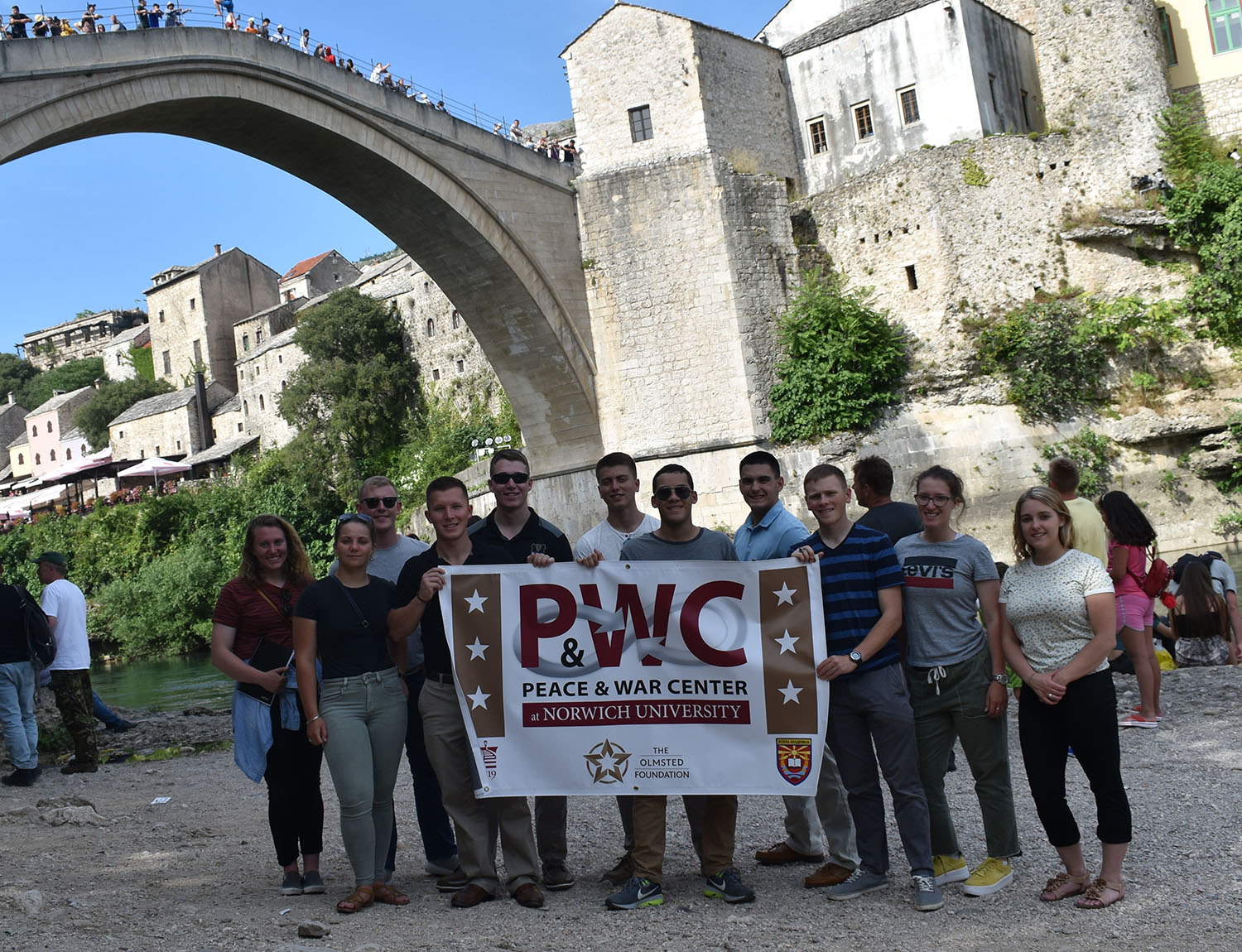 The Field Study: NATO’s Role in the Balkans began with planning in December 2018 and a visit to the Balkans in summer 2019. It represented the task of a lifetime for a team of 11 Norwich University cadets and one member from the Gen. Mihailo Apostolski Military Academy of North Macedonia.

This field study’s goal was providing future officers from two countries first-person experience to understand and evaluate conflict and to work internationally in cooperation with other nationalities. The team of Norwich cadets, funded through the generous support of the Olmsted Foundation and in partnership with Norwich University’s Peace and War Center, represented the U.S. Army, U.S. Air Force, U.S. Navy and U.S. Marine Corps and their areas of academic study were diverse.

Our team undertook the task of a lifetime: conducting a field study of peace and conflict in the Balkans.

The Balkans are known for having a saga of ethnic and religious conflict. These countries share a history of occupation by the Ottomans, Austrians and Germans, before becoming the Republic of Yugoslavia, which unified the peninsula under a common identity for the first time. Following the collapse of Yugoslavia, each country was left to defend itself from internal and external threats. Russian and Middle Eastern influences, an ethnic divide, and several wars in the 1990s resulted in ethnic cleansing, genocide, and unamendable strains in relationships. This gruesome cultural divide is linked with the name Balkan, such as the Balkan wars, causing some countries to not associate with the identity.

Starting in December 2018, our team undertook the task of a lifetime: conducting a field study of peace and conflict in the Balkans. The 11-person cohort planned, researched and analyzed the tension points in the Balkans and how NATO creates peace or conflict in the region. Our team spent the first seven months researching the region, partaking in a Model NATO conference in Washington D.C., and planning the logistics of traveling overseas, all in preparation for 21 days in the region.

After months of preparation, we arrived in the Balkans and became immersed in new countries. We were able to compare and contrast political structures, military capabilities and the values of each country we visited. In Slovenia, Croatia, Bosnia and Herzegovina, Montenegro and Kosovo, our team met with political leaders, military officials, fellow cadets, and locals in order to have a well-rounded understanding of the perception and benefits of NATO. We ended our trip by participating in Summer Campus in North Macedonia, which taught us to cooperate and problem solve with cadets representing 12 countries.

Our team was able to hear the conflicting perspectives in each country to understand the root problem and consider solutions to this divide. By listening to these perspectives, we were able to discern and understand that conflict is complex and varies based on cultural values and history. Organizations such as NATO are a means for compromise and cooperation to resolve conflict.

Peace, cooperation, and shared history are cornerstones of NATO values. As our team traveled south, we witnessed these values within NATO missions to solve ethnic and religious divide. In Bosnia and Herzegovina and Kosovo, war was still written into the minds of their citizens. In Sarajevo, the buildings have bullet holes plastered on the walls, showing the lasting influence and memory of war. Bosnia and Herzegovina are still trying to mend tensions by having three presidents representing each ethnic group. Our team was able to meet with locals and hear from NATO officials in Sarajevo who told us there is still resentment for the presence of international organizations within the country.

As we continued south, we found the opposite reaction to international intervention in Kosovo. NATO and Kosovo Force (KFOR) are praised for their intervention and for creating peace during the war in 1998. Our team heard the first-person stories of people who lived through both the war and the conflict in Bosnia and Herzegovina in 1995. People in Bosnia and Herzegovina generally were unhappy with the bombing mission made by NATO. Meanwhile, Kosovars were happy with the intervention of the genocide.

Throughout the region, each country strives to resolve conflict and mend ties among its citizens. For the majority of countries, NATO is a key component in this equation. However, it raises the question, How does NATO play a role in decreasing tensions and enhancing stability within the Balkans?