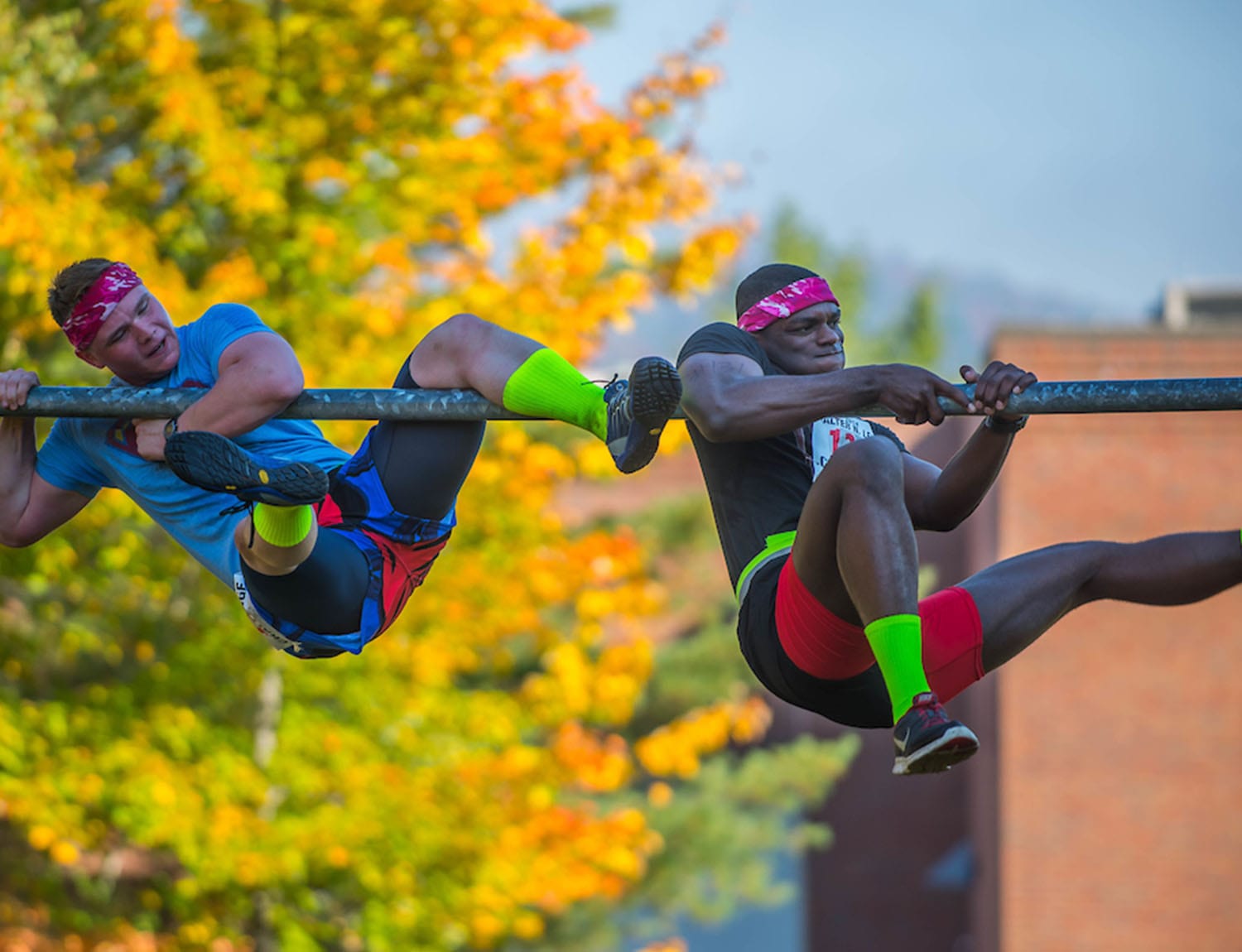 Neither hills nor mud nor weighted-down trudging will stop motivated Norwich University students, faculty, staff and community members from going miles for wounded veterans this weekend.

The university’s Semper Fidelis Society student group will again host the Walter N. Levy Challenge, a 10-kilometer (6.5 mile) obstacle-laden race set for Sunday, Oct. 27. The race will raise money for the Semper Fi Fund, a national nonprofit dedicated to helping wounded service members from all U.S. military branches and their families. John McFadden ’22, a Corps of Cadets member who helped organize this year’s race, said the fundraising goal is $5,000.

The race is open to the public; participants can register in a four-person team or individually at Active.com. Packet pickup for contestants starts at 6:30 a.m.; the race follows at 9 a.m.

“Once many take off the uniform that defends this great nation, whether by their choice or not, the fight does not stop.”
— Kevin Carter ’21, president, Norwich University Semper Fidelis Society

Levy, who attended Norwich University in 1960, served as a Marine Corps second lieutenant infantry officer and was killed in action on Sept. 18, 1965, in Quang Nam Province, South Vietnam.

McFadden said, “This (event) builds a lot of history for the school. It helps people who are new to the school — the incoming freshman class — learn a little bit  more about why they’re here, the general history of self-sacrifice and the moral courage that a lot of our alums have.”

The race also invites central Vermonters to learn more about the university and the quality of its people, McFadden said.

“The people of Northfield know that, but the people of Berlin or Barre who don’t know very much about the school … they get a little more chance to learn what we’re about and what the campus is like,” he said.

“(The race) helps inspire esprit de corps among Corps students and those who are looking to serve,” Sikora ‘22, a business management major who hopes to commission into the Marines, said by email, “while also reminding the civilian students of those who sacrificed so they can enjoy their freedoms.”

“Once many take off the uniform that defends this great nation, whether by their choice or not, the fight does not stop,” Carter, a political sciece major who is contracted to commission into the Marines, said by email. “They face many other difficulties financially, physically, and emotionally. It is essential to recognize the American heroes who have made the ultimate sacrifice and show them our support.”

In the past five years, fundraising from the Walter N. Levy challenge has let Norwich donate $23,400 to the Semper Fi Fund. On its website, the fund said donations by Norwich and other groups will help it deliver $23.8 million in services to wounded veterans in 2019; fund programs address service members and family support, integrative wellness and transitions.

In the fund’s summer 2019 newsletter, Navy corpsman Joe Dan Worley, who as a battlefield medic stepped on an improvised explosive device during a 2004 firefight in Iraq and lost his leg, expressed gratitude for the help and compassion he received since his injury.

“It wasn't the money they spent on us, it was the love they showed us,” Worley, who lives in Powder Springs, Georgia, said. “I will never forget that.”